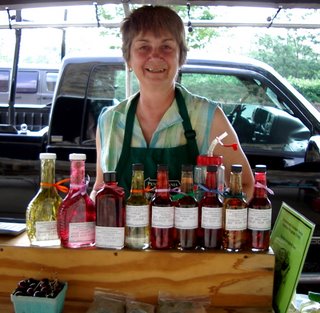 Margerum is a familiar name to anyone whose memory of the Reading Terminal Market goes back more than four years. From the day the market opened in 1892 until 2001, a member of the Margerum family sold foodstuffs there. That tradition continues at some of the city's farmers markets through Noelle Margerum and her sister Carole.

The Margerums have been at the Clark Park Farmers Market for the past few years, and this summer added the Fairmount & 22nd Street market. Carole was there today with fresh produce (beets, greens, bing cherries, etc.) as well as the Margerums flavored vinegars, which take on a colorful glint in the afternoon sun.

Noelle comes in from South Jersey, Carole, in photo with the sisters' infused vinegars, hails from near York.

At today's Fairmount market Earl Livengood and his neighbor Sam Consylman urged buyers to take advantage of any cherries they see, because the recent rains have played havoc with the crop. The torrential downpours have caused many cherries to split, which ruins them for the fresh market. The bing cherries I found at Margerums were in fine shape, though, as were Earl's pie cherries.

Earl doesn't expect the rains have caused damage to the other stone fruits. As long as they get some sun as they ripen the apricots and peaches should be just fine. I finally tasted the apricots I bought Wednesday from Benuel Kaufman at the RTM, and although they were juicy they lacked flavor: the rains have diluted the fruit's subtle flavor. Sam Consylman thinks that will be cured with a few days of sun.
Posted by Bob Libkind at 6:08 PM No comments: