Boston hasn't had a public market since the 1950s when Faneuil Hall and Quincy Market fell so deep into disrepair that the federal government threatened to close them, forcing many vendors to relocate. Now, according to an article in yesterday's Boston Globe, city officials are hoping to turn the ground level of a vacant five-story parking garage and office complex owned by the Mass Turnpike Authority into one. Boston, the article notes, is one of the largest cities in the country without a public market. The article cites the Reading Terminal, along with Seattle's Pike Place, as "highly successful attractions that provide a unique window into the culture of those cities. "
Posted by Bob Libkind at 4:49 PM No comments:

It seems my earlier report that the shad at John Yi's were harvested from Southern U.S. rivers was mistaken. According to the signs, these comes from European waters. Further research shows that there are two species of European shad inhabiting eastern Atlantic waters from Morrocco north to Norway, though the commercial shad fishery is centered in the Gironde-Garonne-Dordogne basin of France.

Although these fillets, whole fish and roe sets looked fine, you're probably better off waiting for the local run, which arrives in late April and early May. Or visit the annual Lambertville shad festival, scheduled this year for April 25 and 26.
Posted by Bob Libkind at 2:27 PM No comments: 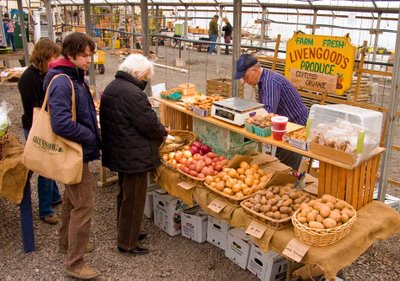 Greensgrow's own retail operation reopens for the 2009 season April 28, selling produce, meats and dairy products from many of the same farmers who market through Fair Food and/or participate directly in regional farmers' markets.
Posted by Bob Libkind at 4:40 PM No comments:

Lancaster County Dairy needs more space, Old City Coffee's adjacent stand is a jury-rigged mess. Solution: Old City reduces its footprint in a redesigned stall, making the operation more efficient (particularly important on a morning like today, when attendees and exhibitors from the crafts show at the Convention Center caused long lines). And Lancaster County Dairy gets the space it needs.
Posted by Bob Libkind at 4:03 PM No comments:

Shad from Southern rivers appeared at John Yi's last week. Today they were selling for $3.99 (buck), $4.99 (roe) and roe sets were commanding $7.99. Local shad don't appear in the Delaware until May.

Based on how good it was a few weeks ago, I bought some haddock fillet at $7.99. I'll pan fry it tonight, perhaps in a panko crust.

Or, at least, price reports from Iovine Brothers at the Reading Terminal Market.

The prices have held relatively steady except for a whopping reduction in the cost of limes. For the past week limes have been selling for a dime apiece. With Hass avocados under a buck (89 cents), it's once more guacamole time.

About nine vendors attracted a moderate but steady stream of customers this morning. Since I had already visited the RTM and was bound for Greensgrow in Kensington/Port Richmond, I limited my purchases to four small storage winesaps, from Keystone Farm at $1.29/pound. They had good flavor, were relatively unblemished but, like almost all storage apples, had lost their crunch. Lots of good looking root vegetables and, especially, winter greens at the various produce vendors. Also some spring greens, like dandelions, courtesy of some growers' greenhouses and high tunnels.
Posted by Bob Libkind at 3:34 PM No comments: 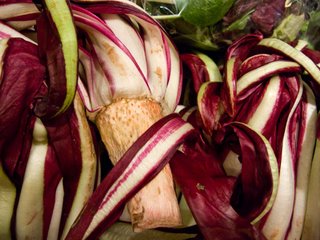 Has it really be three weeks since I've posted? Shame on me.

That means I neglected to tell you about the odd raddicchio Iovine Brothers Produce featured for one week back in January, the Tardivo (photo at right), which apparently is created by some forced growing method that creates the elongated leaves out of the more common Raddichio di Treviso. Priced at $22/pound, I don't think the Iovines had many takers, certainly not enough to keep this winter specialty in stock.

In his monthly newsletter to merchants, Reading Terminal Market GM Paul Steinke notes that the market's parking program at the Parkway Garage is now less expensive for customers than on-street parking, since the Philadelphia Parking Authority's meter rate is now $2 an hour, vs. $3 for two hours at the garage. To reduce expenses to merchants, who subsidize the customer parking program, consideration is being given to raising the cost to customers to match the city's on-street rate.

The Valentine's Day tradition at the RTM continues, with five couples scheduled to tie the knot Saturday at 11:30 a.m. in center court. Common Pleas Court Judge Jeffrey P. Minehart will officiate, and the newlyweds he couples will be treated to a complimentary dessert reception hosted by La Cucina at the Market and other merchants

Working is progressing apace for Miller's Twist, the successor to Fisher's now taking over part of the "Green Court" space across the way. Signs are also up for S&B Meats, which will occupy the former Dutch Country Meats space along with Barb & Suzy's Kitchen, which will sell sausage sandwiches and other items. 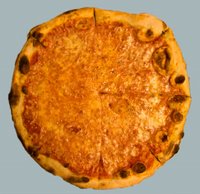 Simply because I liked it (it certainly doesn't fit into proclaimed subject matter of this blog, though there is a tenuous connection), I want to shamelessly advance the cause of a new pizza-maker in town, Danny DiGiampietro.

Danny's been supplying the bread for Tommy DiNic's sandwiches (that's the tenuous connection) and other steak, hoagie and pork sandwich makers in town for about a year out of his South Philly bakery at 8th and Watkins (1712 S. 8th). He's been experimenting with making pizza in the last few weeks in order to add another line of business to his efforts. But he didn't just want to slap pizza together to add to his profit. Danny's got pride in what he produces (as anyone who has enjoyed a DiNic's sandwich knows, the bread is pretty good, too), so he's taken the time to search out quality ingredients and pin down the right technique in order to produce a quality pizza.

It's very tasty, well-balanced pizza. The crust is on the thin side (but with enough structure to support the lightly-sauced pie) baked to a nice char. The sauce itself is straightforward, exercising restraint on the seasoning. The cheese, of superior quality, comes from Grande's in Brooklyn, so there's no need to add oil on top of the pie to keep it from burning in the oven.

It's not, as one wag put it, a "destination" pizza. But it's among the better pizzas I've consumed in Philadelphia where, surprisingly, good pizza is not necessarily easy to find. (I include Pizza by George at the RTM as among Philadelphia's better pies.) Danny's done right. If I lived in the neighborhood, I'd make it a habit; as it is, I'm going to stop by every once in a while and ask him to underbake one so I can finish it up on the baker's stone in my home oven. I think his availability of other toppings will probably be limited, so don't expect to order a clam or pineapple and ham pie.

So far, he's given the pie away to his retail bakery and commercial customers asking for comments. But he plans a "soft" opening starting Monday. Hours for pizza will be from 11 a.m. to 11 p.m., I think seven days a week. Although his business has been geared primarily to commercial baking, he retails sandwich rolls, big Italian loaves and a few other bread items at the South Philly shop.

Right now the sign in front says "Coppola Bakery", which was the name of the bakery before Danny took over the shop nearly a year and a half ago. The sign might be changed to "Giampietro" by Monday. Maybe not.

He does have a big, unused brick oven in the basement, which probably dates back 80 or 100 years, since he figures the building was built as a bakery. It's restorable, but would take a major investment, one he's not planning to make in the foreseeable future.
Posted by Bob Libkind at 12:12 PM No comments: