By the time the Headhouse Farmers' Market closes for the season Dec. 18 Ben Wenk plans on selling hard cider made on his family's Three Springs Fruit Farm in Adams County.

He's been thinking about making hard cider ever since he and his father, Dave, first sold their produce at Headhouse when the Food Trust's big market opened in 2007.

"After our first day at Headhouse my dad and I decided to have a celebratory drink at what is now Cavanaughs," explained Wenk. "I got whatever tap handle I didn’t recognize and I ordered Strongbow, thinking it was a beer and not realizing it was a cider."

Ben had tried hard ciders before, like Woodchuck, but found them too sweet for his taste. But he and his dad both enjoyed the drier example. "Dad turns to me and said, like, we can make this sometime. So later that year bought used bourbon barrels and started experimenting."

Since then Wenk has taken cider much more seriously, and three years ago began planning his own commercial cidery, with help and support from some of his neighbors, including Big Hill Cidery up the road. For pressing his apples into juice, Wenk brings his bins over to Lem Christophel who runs Eden Garden Farm in nearby Dillsburg (and sells his crop at the Clark Park Farmers Market, also, like Headhouse, operated by the Food Trust).

Cider can be made from "dessert" apples, those meant for fresh eating, and it will be good. But Ben's long-term plan is to take advantage of classic cider varieties, most of which are too bitter or astringent to be appealing in a lunchbox.

So in 2013, after considerable research, Ben ordered a variety of cider apple trees to plant. They arrived and were planted last year, and may produce a few useable apples next season, but Ben isn't figuring on a significant yield until three or four years from now. A good cider, like a good wine, takes time.

This season's hard cider will get much of its oomph from two dessert apples, one which has been a standard for the past few years, Gold Rush, and another which Wenk planted a few years ago and is just now bearing fruit in sufficient numbers, the Esopus Spitzenburg. The former is an extraordinary juicy sweet apple developed in the 1990s in a joint program by the Indiana, Illinois and New Jersey experimental agricultural stations, the latter, one of the oldest North American apples, another good juice producer with a complex flavor.

"Both Gold Rush and Spitzenburg are high in acid and brix [a measure of sugar in liquids), so they're good apples to blend," said Wenk. The sugar content is important, not so much as to add sweetness to the final product but to provide food for the yeasts that turn apple juice into hard cider.

By itself acidity doesn't make a good cider; but acids with a tannic quality do. Tannins add dryness, astringency and texture to the final product, and that's a quality many traditional cider varieties have in abundance. While his cider trees grow toward production levels, Wenk is experimenting by adding other fruits and botanicals with tannins to his mix: dry hops, chokeberries, "and similar substances to get that really bitter characteristic into our blends."

Although Wenk regards cider both in its production methods and taste qualities as closer to wine than beer, he buys into the experimentation American craft brewers are noted for and applies it to his cider.

"We take English cider makers as our inspiration," he said. Indeed, English farm tradition provides the name for his cider: "Ploughman", as in "Ploughman's Lunch," the traditional midday meal of pickle, bread and cheese.

"Like most American craft producers we use traditional methods but like the opportunity to experiment". Not orange creamsicle, he's quick to add, but he will "take the best of what’s on the farm and put it it in the bottle. If blackberries are good one year, we’ll add those. We're taking  a winemaker's approach in creating a cider that a craft beer drinker would like." He hopes to add "terroir appeal" by experimenting with natural yeasts, "an expression of the soil the apples grown in," although right now commercial yeasts provide the consistency he needs.

Wenk plans to sell the cider at the farmer's markets he frequents, including Headhouse here in Philadelphia, other markets in Pennsylvania close to his Adams County base, and to taverns in Washington, D.C. He also plans to sell to kegs to Philadelphia restaurants where he currently supplies fruit.

Wenk sees cider as one more attraction to lure visitors to Adams County, beyond the battlefield at Gettysburg.

"I think hard cider in the U.S., especially east coast, has really grown up.  We want to make Adams county a destination to visit and drink cider in," said Wenk.
Posted by Bob Libkind at 6:32 PM No comments:

Franks A Lot: Not Really 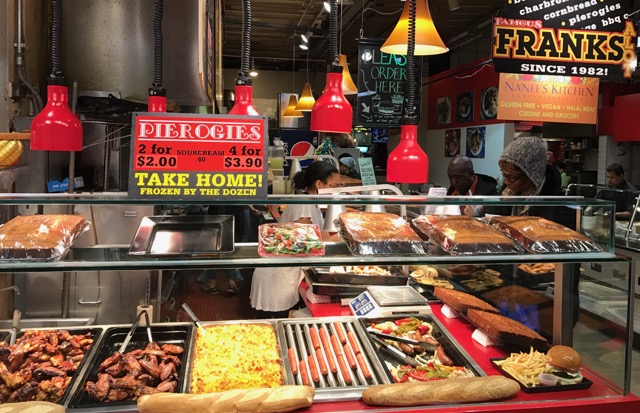 The name of the stall is Franks A Lot, but they don't have a lot of franks. And the franks they do have are cooked in about the worst way possible, heated rollers, like you'd find in a convenience store.

I'm a hot dog snob so I've given up getting a tube steak here. But there's plenty else to choose from, and all of it is a better choice.

Hot dogs make up only one-eighth of the space on the stall's menu boards, the rest of it filled with various barbecued and fried chicken offerings, burgers from beef or turkey, kielbasa and Italian sausage, meatballs, pierogies, and various sides, including cornbread and mac 'n cheese. After a brief experiment the stall gave up on salmon burgers.

I haven't sampled the complete menu, but the potato pierogies are the real deal. Maybe not quite as good as what you'd find in certain Port Richmond establishments, but close enough. Likewise the barbecued chicken will satisfy; not quite the same style as you'd find at Dienner's in the Pennsylvania Dutch section of the market, but equal in quality.
Posted by Bob Libkind at 3:20 PM No comments: