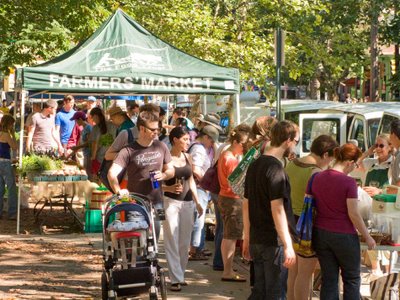 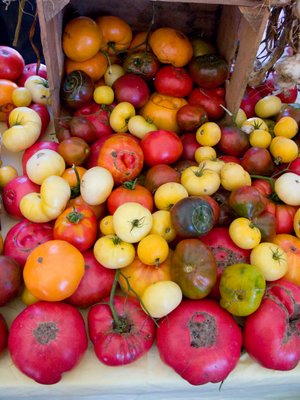 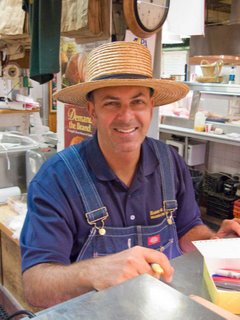 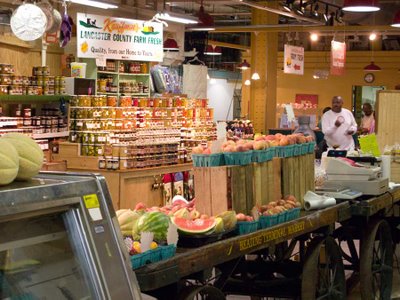 Posted by Bob Libkind at 2:19 PM No comments: 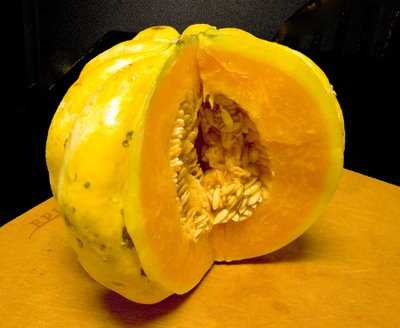 Once upon a time, there were Watermelons, Canteloupes and Honeydews, with an occasional Casaba or Persian to behold. Today we've got lots more choice. I don't have the slightet idea what variety is pictured here, but I can attest to its deliciousness.

From the outside, it didn't look like much. Hard, very wax skin (no netting like members of the cantaloupe family usually evince). But its aroma was enticing and was clearly ripe and ready for eating. The folks behind the stand at Beechwood Orchard (Headhouse Square last Sunday) didn't know what it was, other than it was ready to eat.

I cut it open Monday evening and was overcome by the aroma. She Who Must Be Obeyed was also overcome, but her reaction was totally different from mine. SWMBO quite accurately characterizing the smell and taste as "perfumey". To me, that's high praise for a melon. To her, it qualifies the melon for the trash can.

When a melon is good there's hardly a more refreshing fruit. This melon was damned good, one of the best I've ever enjoyed. I urge you to try new and different melons that you spy at the local farmers' markets this month, the peak of melon season. 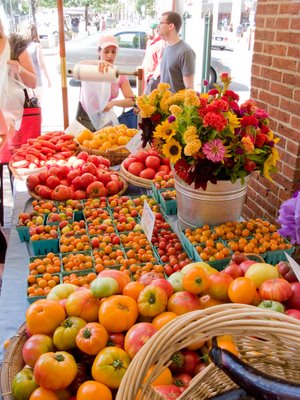 Headhouse Square boasted more than melons, of course. Entering the market from the Lombard Street side one is immediately impressed by the tomatoes and other produce displayed by Blooming Glen Farm. Next week I'm definitely going to buy some paste tomatoes for gravy! Of course, it's hard to pass up the red and sungold cherry tomatoes for fresh pasta sauce or the yellow tiny pear tomatoes. This time of year, it's hard to go wrong buying any tomato (though it's possible if you restrict your tomato buying to supermarkets).

Speaking of pears, they're here. At least a variety that Buoni Amici called "Startlingly Delicious". I didn't buy any to test that proposition, but maybe this weekend I will. There are a gazillion varieties of pear, but a quick Googling failed to turn up one under this name. But it appears to be a Bartlett relation.

Peaches and blackberries are in full form. (Blueberries have basically run their course, unless, like me, you brought four quarts home from Maine). At last Tuesday's South Street market, Sam Consylman's Raritan Rose peaches sold at Earl Livengood's stall were gone by the time I arrived an hour after the opening bell. Beechwood Orchards (which is at South Street as well as Headhouse) featured both red and white donut (Saturn) peaches, red and white tradition peaches, and nectarines, iirc.

Highest on my list of produce offered by Beechwood (after the melon!) is the Santa Rosa plum. When they're good and ripe (black rather than red) they are incredibly sweet and flavorful. And juicy: Be sure to eat them over the sink. 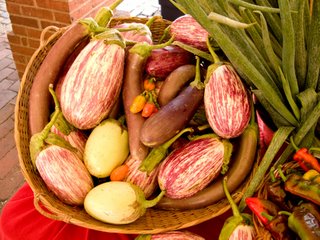 I enjoy eggplant in various guises but cook them rarely: usually just burn 'em on the grill and convert the flesh to babaganoush. These little pretties could change my mind. I could be mistaken, but I believe they were on display at Weaver's Way.

Over at Culton Organics I picked up some yellow beets that, from the exterior coloration, could have been confused with rutabagas. Praise the lord, they didn't taste like those bocci ball Swedish turnips! I had some of those sweet red cylindrical beets I always rave about sitting in the crisper at home, so I roasted a couple of each on the Weber Silver B and enjoyed them with some simply grilled Bell & Evans chicken parts (breast for SWMBO, whole leg for me). Properly stored in the produce crisper, beets will keep for at least two or three weeks, sometimes more. (Beets are roots, and in days of yore they were among the foods that went into a family's root cellar to last the whole winter. Just remove any leaves and all but maybe an inch of stem, leaving the root end unmolested. Wipe off any loose clinging dirt - but do not use any water - and store in the fridge.)

Over at the Reading Terminal Market, Iovine Brothers was busting at the seems with summer produce , including local sweet corn. I went for the very fresh green beans Saturday, priced at 79-cents. Another great bargain were the scallions from Delmarva. Instead of breaking them down and trimming for sale, they were selling in bags containing about a dozen bunches for $1.99. These weren't old veggies Iovine was trying to get rid of, either; they needed only normal washing and trimming. The decidedly non-local limes prompted me to make many a summer cooler at 8 for a buck.

Earl Livengood's open-pollinated corn, both at South Street and the RTM, is exceptional this year. And in another week or so, Fair Food, if it follows previous years' form, will start selling Mirai, an incredibly sweet Japanese hybrid.

Benuel Kauffman's Lancaster County Produce, also no slouch when it comes to selling quality in-season corn, has grown across the aisle, occupying some of the space vacated by Dutch Country Meats. Ben went so far as to move one of the refrigerated displaty cases to make way for a market wagon filled with the summer's bounty.

Still no signs of Jonathan's Best, the grocer slated to take over the former Margerum's/Natural Connection space across from Dutch Country Meats. Some of the butcher space was supposed to be taken over by the Amish pretzel stall. No signs of any of that yet.

After a year's hiatus the RTM's annual Pennsylvania Dutch festival is back, and among the activities will be an auction of Amish crafts (including a handmade quilt) conducted by Moses B Smucker Auctioneers of Narvon. More details on the event (to be held Thursday, Friday and Saturday) at the market's web site.
Posted by Bob Libkind at 3:58 PM 1 comment: