A steaming bowl of chili or cauldron of soup seems essentially in cold weather. Fish chowder also satisfies that craving for me.

I went with a piece of haddock from John Yi's Saturday. Since I'm the only one in the house who enjoys this New England classic, I only used about a quarter pound of filet. A lot of folks think New England chowders have be creamy and thick. They don't. IMHO, whole milk allows the flavor of the fish to come through best.

I start out by gently sautéing in bacon fat a small onion, a stalk of celery, and half a carrot, all diced to about one-quarter inch. Once they turn translucent I add a medium diced potato, and gently sauté for about 10 minutes. Next comes about a cup of stock (I used vegetable stock made primarily from last fall's red celery from Tom Culton of Headhouse Square, though either fish or chicken stock would work very well) and a cup of milk, which simmers the veggies for another 10 minutes. By this time the potatoes are just about done, so it's time to add the fish (cut up into spoon-sized pieces), salt and pepper to taste, and thyme, dried or fresh, maintaining the pot at a simmer. After five minutes add a tablespoon of butter -- don't stir, just let it melt atop the liquid. By the time the butter adds its yellow sheen, the fish is probably cooked through. Once in the bowl, I top the chowder with fresh chopped parsley. To accompany, I used the last of my precious stock of Crown Royal crackers, a Maine favorite which has been discontinued by Nabisco, but OTCs would work well, too. Saltines and oyster crackers just don't have the necessary heft for those soup.

If you don't like plain white fish, no reason why you can't use shrimp, lobster, scallops or clams.

That filet of haddock at John Yi's in the Reading Terminal Market set me back $7.99/pound, which was also the price of the flounder. Fluke was $9.99. It was also one of those weeks where wild striped bass cost less than its farmed-raised cousin (a striped bass-white bass cross), $4.99 vs. $6.99 for whole fish. Boston mackeral has made an early appearance (it's strongest runs start in the spring), with prices ranging from $1.49 to $2.59, depending upon size. Medium-sized porgies were $2.99, cod filet (which would be an other good choice for chowder) $9.99, black sea bass $5.99.

A Wan's Seafood, the haddock would have set me back $11.99/pound. Whole striped bass as $3.99 (though the quality didn't look quite as good as at Yi's), though the filets were appealing at $9.99. Wan's was the only RTM fishmonger still selling sardines, $3.99.

Golden Fish's new cases displayed wild striped bass at $4.99, whole black sea bass at $4.99, Bronzino (another sea bass, farm-raised in Europe) for $7.99 on the bone, and particularly good looking, fat mackeral at $2.99.
Posted by Bob Libkind at 11:05 AM No comments:

In my earlier post, I neglected to mention the name of Miller's Twists' proprietor. It's Roger Miller, who is no stranger to the market. For the past nine year's he's been store manager of the Dutch Country Eating Place for owner Junior Esh.

Also, the two businesses which will share the former Dutch Country Meats stall are S&B Meats (the butcher) and Barb & Suzy's Kitchen.
Posted by Bob Libkind at 10:53 AM No comments:

I counted more than a dozen varieties of citrus fruit at Iovine Brothers Produce Saturday morning. Here they are, along with prices:
Among those varieties I've tried in the last couple of weeks, the red navels from Florida were interesting, but I don't think they hold universal appeal. The sweetness and juice levels were well below those of regular navels, and the taste was more akin to grapefruit. I've been unable in web searches to pin down this variety's ancestry, and wonder if it's a cross or derivative of grapefruit. Not a bad orange at all, and a nice change of pace. But not a knock-your-socks-off variety.

If organic and small grower citrus from Florida is one of your requirements, you might consider stopping by the Fair Food Farmstand and paying a premium. Navels and Cara Cara red oranges were selling for $1.50 apiece, Sunburst tangerous 95 cents each. A premier juice variety, Hamlin, priced at 60 cents apiece. Red grapefruit were $2.75.
Posted by Bob Libkind at 10:16 AM No comments:

Jonathan Best, the new fancy foods grocer at the Reading Terminal Market, will celebrate a grand opening next Tuesday. Jan. 27. The festivities include a raffle for "a weekend getaway in Chestnut Hill," where the business's main store is located. Also on the agenda: music from a Beatles cover band and soup samples. The celebration will be celebrated from 11:30 a.m. to 3:30 p.m. The store will donate 20 percent of the day's proceeds to Project H.O.M.E.
Posted by Bob Libkind at 10:04 AM No comments:

By the time Flower Show comes around in early March, the soft pretzel operation at the Reading Terminal Markets will have moved under new ownership.

Miller's Twists will be the name of the new business, and it will be located across the aisle from the existing pretzel stand operated by Paul Fisher, occupying some of the space that's now a seating area. Miller's will also add ice cream, another transplant from Fisher. Once Miller's opens, Fishers will expand its candy business from its current tiny alcove into the current pretzel/ice cream space; design work for that expansion is not yet completed.

The space formerly occupied by Dutch Country Meats will be shared by two related businesses. One will be a butcher primarily selling pork products, the other will be a lunch vendor selling cooked sausage and related products for both on and off-premises consumption.

Absolutely no movement on filling the space vacated by Everyday Gourmet (before that it was Andros), though RTM GM Paul Steinke would love to locate an ethnic grocer there, perhaps a Russian, Polish or Ukrainian food purveyor.
Posted by Bob Libkind at 12:16 PM No comments:

Email ThisBlogThis!Share to TwitterShare to FacebookShare to Pinterest
Natural and Unnatural Meats

When Charles Giunta opened his Giunta's Prime Shop at the Reading Terminal Market his goal was to offer strictly organic or hormone-free meats. Though his signage suggested he'd be carrying USDA prime grade meats, he did not.

Now, Charles' products happen to be of excellent quality; I think his wet-aged beef, particularly the steaks, are about the best value you can find in red meat protein.

But the signs are misleading, and only a portion of the beef he carries is hormone-free, let alone organic. You have to ask whether a particular cut is hormone-free before you buy it, and the staff is not uniformly informed. Although I prefer hormone-free meats, I don't have hard-and-fast rules about it – if the beef tastes good. But I don't think he signs should suggest otherwise.

As for the "Prime" moniker, while that is also deceiving, I don't have as much of a problem. When USDA changed its grading standards more than 20 years ago, the difference between Prime and Choice became a lot fuzzier, as far as I am concerned. There's plenty of Prime out there that isn't, and, likewise, it's not that difficult to find Choice that tastes like Prime. And I won't even get into how most of the prime rib roasts (more properly called standing rib roasts) sold in this country are not Prime grade beef.

Likewise, only some of Charles' poultry products are hormone-free organic. He initially carried a lot of Eberle product, but now he focuses on Bell & Evans, which is a natural bird, i.e., no additives, non-therapeutic antibiotics or growth hormones. The all-natural ducks from Joe Jurgielewicz & Son of Shartlesville, about half an hour north of Reading, are superb.

When I recently asked Charles about this issue, he observed that he simply couldn't have survived on just organic and natural meats because they are more expensive; his customers just didn't purchase them in high enough quantities to justify basing the business on them. While there are a few customers who will pay $18 or $23 for a steak, the vast majority of shoppers, including those at the Reading Terminal Market, look for the least expensive product that still offers reasonable quality.

A tip of the hat to fellow blogger Gaetano of Philly Market Cafe for refocusing my attention on the signage discrepancy.
Posted by Bob Libkind at 10:35 AM No comments: 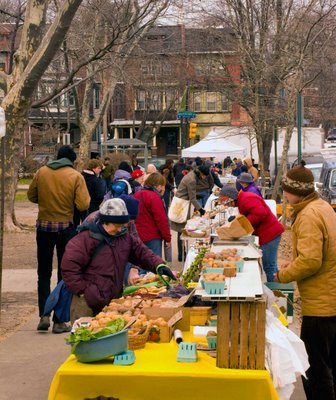 I visited the winter market at Clark Park Saturday. The Food Trust has managed to attract 8-10 vendors each week to this year-round venue.

This past Saturday vendors were:
Two other vendors who usually make the market, but didn't last week, were Landisdale Farm and Mountain View Poultry.

The most interesting product I found was pointed out to me by Jon Glynn, who manages the Clark Park market for the Food Trust. It was the apple syrup from Eden Garden. It's definitely apple-y fruity and sweet, but with a bit of a tannic bite like molasses. Might be interesting to use in a cocktail, as well as on pancakes.

Earl Livengood is considering shifting his winter presence strictly to Clark Park, since he had found his Saturday business at the Reading Terminal Market drops off considerably at and after lunch. Also, he can no longer be two places at once, since son Dwain is spending a year in Honduras.
Posted by Bob Libkind at 10:57 AM No comments:

When the Fair Food Farmstand moves to its new location within the Reading Terminal Market sometime this spring, this old, recalcitrant freezer case will be replaced. A week ago Friday is went kaput, forcing FFF to sell it's contents (mostly meat) at half-price, much to the delight of shoppers. The few items that remained were donated to a local food bank. That's FFF co-manager Sarah Cain lamenting her cool problems.
Posted by Bob Libkind at 10:49 AM No comments: 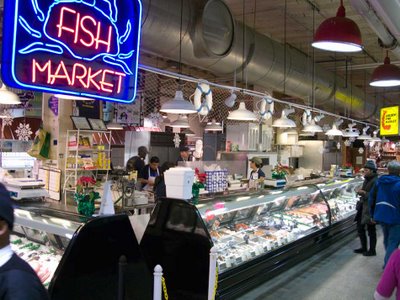 The new cases at Golden Fish, one of three fishmongers at the Reading Terminal Market, have been in place for about a month. They make a big difference in how the product looks. Much more attractive than the old cold cases.
Posted by Bob Libkind at 10:44 AM No comments:

I'm a sauerkraut fan, so I picked up a jar of Wills Valley Farm's fermented red cabbage at the Reading Terminal Market's Fair Food Farmstand a couple of weeks ago.

I came to this conclusion after gently braising some German-style hot dogs in the red cabbage kraut. First I gently sautéed a medium onion in canola oil (butter would work, too) until just barely starting to turn golden, then I added the red cabbage, allowing it to cook covered for about 10-15 minutes. I had an old Asian pear, slightly shriveled, sitting in the crisper, so I peeled it and grated the pulp into the cabbage. (An apple is the usual addition, but none were in the larder.) Then I added maybe a quarter cup of water (if I had an open bottle of white wine, I would have used that), a couple of the foot-long franks, covered again and simmered low for another 10-15 minutes. Delicious, especially when served with a German-style mustard.
Posted by Bob Libkind at 4:01 PM No comments: