Late season raspberries much in evidence. Best deal was at Iovine Brothers, $3.99/pint for what appear to be locally grown berries. Over at Fair Food Farmstand a half pint sold for that amount. Earl Livengood also had some. Blackberries $6/pint or $3.75/half-pint at Fair Food, $4.95/pint at Benuel Kaufman's. Lima beans, shelled or not, plentiful at Livengood's, Kaufman's and L. Halteman's. 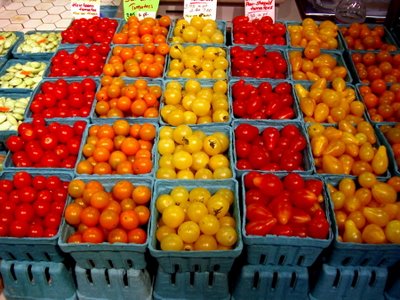 Over at L. Halteman there were all types of plums as well as peaches and pears for $1.89/pound (a dime cheaper if you buy three pounds). Also, another sign of autumn: acorn squash, 59-cents. Also, Bartlett pears and three different types of apples: ginger gold, sansa, "tydomen". The last one is actually Tydeman's Red, a crispy, juicy McIntosh type apple. Sansa is a cross between Gala and Akane, slightly more acidic than a Gala. Ginger gold is a Golden Delicious-Albermarle Pippin cross originally found on Virginia's Blue Ridge Mountains. 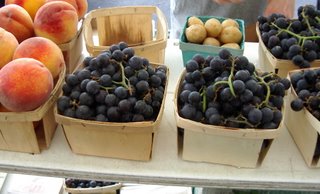 Found at this afternoon's Fairmount market: summer and fall. At Earl Livengood's concord grapes (photo right) could be found next to peaches. Also for sale, carrots and tomatoes (photo below right). Another harbinger of autumn: celery and celeriac. The celery was incredibly fragrant and sold with full roots attached with thin stalks and profuse leaves ($2.50 for a small bunch). I'll be chopping them up to go into salmon salad tomorrow. 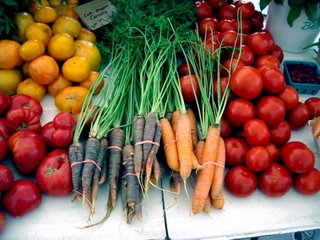 Today's Fairmount market had four different produce vendors. I also purchased corn, yellow pear tomatoes, individual fruit pies, cucumber, garlic, blackberries ($3.50/pint). I restrained myself from overbuying, because the peaches and yellow plums and brandywine tomatoes looked good, too, but I've still got some at home. I'll wait 'til I hit the RTM Saturday.
Posted by Bob Libkind at 4:43 PM No comments:

It's been a while since my last full report, so there's a bunch to catch up on:

John Lohac of Green Valley Dairy is back from three weeks in France. He spent two of the weeks on a family vacation in Provence, but the other week was in Meaux where he learned more about making brie. He'll be putting those techniques to work soon, so expect some interesting cheese to emerge. As it is John thinks his Noble, which is a cheddar, tastes like French Comte; while both cheeses are pressed, cheddar's curd is cut (cheddared). In addition to hawking his cheese on Saturdays across from Golden Seafood, Green Valley Dairy cheese can be found at the Fair Food Farmstand.

The Reading Terminal Market will inaugurate a new ad campaign next month under the theme "Make It Your Market." Samples of the campaign can be seen on the wall behind Salad Express and across from Foster's. The current campaign utilizing old-fashioned produce illustrations will be largely abandoned.

O.K. Lee Produce and Earl Livengood have cut a deal where Livengood has an acre under contract to OKL. The deal enables OKL to sell some produce under Pennsylvania's WIC Farmers' Market Nutrition Program, which provides additional food subsidies for low-income, nutritionally at risk pregnant, breast-feeding and certain postpartum women, infants and childen up to age five beyond the normal WIC program.

Stopped by the Down Home Diner for the first time in a while and enjoyed perfectly done peach and blueberry pancakes with a side of scrapple and that 200-mile coffee. Jack McDavid is easing out of the Down Home Diner operation and, for all intents and purposes, it's now being run by a young man whose name I failed to remember. But he's doing a great job. He's been tweaking the menu (Philadelphia cheesesteak omelet added), but it's the same approach and quality and largely the same staff, including in the kitchen. There are also card inserts on the tables explaining what scrapple is (and isn't) and the wonders of thick cut, high quality bacon. If you haven't been to the Down Home Diner in while, treat yourself and stop by.

Charlie Giunta is moving ahead on his natural meat store. As of last Saturday, all the old cases from the former A.A. Halteman's were gone and work was about ready to start on roughing out the space in the aisle between Iovine Brothers and L. Halteman. Also as of last weekend, work had yet to begin on moving Spataro's. The reason: continuing permitting and equipment delays for the Jewish style deli that will go into Spataro's space. Spataro won't be moving until the deli is ready to begin work.

Now, onto the pricing...

Over at Iovine's Saturday. California strawberries continued to be featured at two pounds for a buck. For a buck, I picked up a bag of shredded cabbage (white and a little red, plus some carrot) for making coleslaw. Clementines $4.99/box. Although local tomatoes are at their peak, Iovine's was selling bagged Canadian hothouse Romas for a buck a pound. Also from Canada, Ontario grapes for $4.99. Local purple eggplant 79 cents. Italian prune plums $1.49, West Coast Bing cherries $1.99. California Mission figs, $3.99 a pint. Washington State blackberries $4.99 a half-pint.

The blackberries were a better deal almost anywhere else Saturday. Over at Fair Food Farmstand organic berries were selling for $6/pint; Benuel Kaufman had conventional blackberrries for $4.99/pint. It's salsa-making season, and you could do worse than make some from the Fair Food's tomatillos, $3.50/pound. Low-spray peaches $2.50, conventional nectarines and white peaches $1.25. Organic plum tomatoes $2. Concord grapes $3.50. Small lemon cukes pricey at $1 apiece.

More redesign of vendor stalls at the Reading Terminal this past week. Fair Food Project largely completed their re-do. Now customers can pretty much walk through the stand with the register in the middle. Even self-serve out of the meat freezer. And lots more bin space for produce, though one has to wonder how it will look in the dead of winter when local produce is virtually non-existent except for some hothouse items. The Mirai corn was 50 cents an ear (or three for $1,25, iirc), which compares favorably with the other farm stands. Iovine Brothers was selling their farmer's corn at three for a buck. Fair Food also featured lemon cukes at 75-cents each.

Over at OK Lee, the cactus pears are of much better quality than just a week ago, and still priced at 79 cents apiece. The photo at right shows what they look like, before and after skinning. Cactus pears (a.k.a. prickly pears) come in a variety of colors. You want to select firm, but not hard, fruits with minimal scarring. These babies peeled easily with a sharp paring knife and were sweet all the way through. Some pulp clung to the skin, so I scraped it into my food mill along with the main body of the pulp. After going through the food mill, I took unpassed seeds and their clingy pulp and pressed them in a strainer to get every last bit of delectible edible fruit. To dense juice of the five cactus pears I added the juice of two large limes and the equivalent of 1-1/2 cups sugar, in the form of sugar syrup.

Back at Iovine Brothers, both green and black figs were available at $4.99 a half pint. Both lemons and likmes were selling for 25 cents apiece when I visited on Thursday morning

Earlygold has joined MacIntosh over at Halteman's as the first apple of the season. Benuel Kaufman had some blemish-free pears for $1.49/pound.
Posted by Bob Libkind at 1:59 PM No comments: