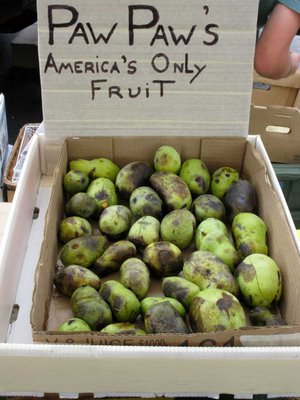 The latter, whose name I forget (other than David) is an Amishman who also sells at South Street on Tuesday afternoon. The cheese-maker is North Jersey's Valley Shepherd Creamery, which makes superlative sheep cheeses which I've previously purchased at the Fair Food Farmstand.

The paw paws were in, and they are ripe and ready, as you can see in the accompanying photo. As noted in my earlier post, you want to buy them heavily mottled. These were gathered by Sam Consylman and available at Livengood's, whose own paw paw trees have produced larger (but not quite ready yet) fruit this year, according to Dwain Livengood.

The addition of David and Valley Sheperd Creamy brings to six the number of merchants at Fairmount. Other vendors there include Bill Weller (orchard fruit and other produce), Sam Stolfus (produce, Pennsylvania Dutch baked goods), and Versailles Bakery. 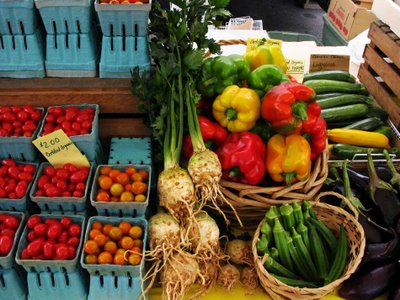 At left is a sample of some of Livengood's produce available today, including celeriac and okra. Dwain says they don't plant late corn, so the ears they are selling come from other Lancaster area farmers.

They've still got ground cherries. Audrey Livengood said she baked them in a pie that turned out very well. She pre-baked the shell, then sprinkled the bottom with sugar (brown, I think) and flour, then mixed the fruits with some additional flour (not much), sugar and a couple tablespoons of water before baking. The ground cherries don't release all that much liquid, she said. Dwain vouched for its deliciousness.

A few weeks ago I raved about Green Meadow's bacon, and said I'd also report on the nitrite-free product from Country Time. Alas, the Country Time bacon is one I won't be purchasing again. Much too salty, light in the smoke department. The saltiness is a problem I've tasted before in nitrite-free bacons. Gimme chemicals, especially natural ones like saltpeter.
Posted by Bob Libkind at 4:44 PM

PAWPAWS are spectaculare!!! Thanks for pointing these out Bob.

Squirrels or coons ate all my homegrown Pawpaws this year, dang it.