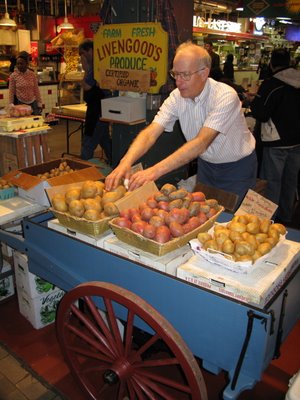 Earl Livengood this past Saturday unveiled a project he's been working on for two winters: a new cart. The steel-blue, wooden-wheeled vehicle (photo at right) displayed potatoes this week at Earl's regular Reading Terminal Market location. Although the spring crop has yet to be planted (other than seedings Earl and son Dwain have started in the greenhouse), we soon might start seeing the pokeweed Earl's friend Sam Consylman buries in sand each fall.

You will no longer regularly find baked goods from Haegele's at Dutch Country Meats. Purveyor Jake Fisher's lease specifies meat, so when one of the other vendors complained about DCM's carrying baked goods, GM Paul Steinke had no choice but to crack down. Fisher said, however, that he'll be allowed to sell a few specialty baked items at holiday time. (My wish would be for Haegele's to rent daystall space on Saturdays at the market to sell their goodies, which really have no competition in terms of specific items and quality with any of the existing the baked goods sellers at the market.

Expansion of product line beyond what's authorized in leases has been a bone of contention before. It's one of the issues which contributed to the departure of Siegfried's, the Germany specialty store whose Große Schuhe Dutch Country Meats is trying to fill. All was fine at Siggy's until his son, who managed the stall, tried to expand into serving lunch items items for on-premises consumption; that was a no-no, since the store 's lease classified it as a purveyor, not a lunch stand. 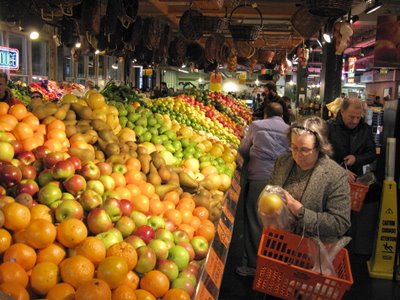 Even though it's the height of the citrus season, certain fruits have climbed in price. Over at Iovine this past weekend, a lime or lemon would have cost you 50 cents apiece. That's a far cry from summer, when either can sometimes go for a dime apiece.

Reasonably-sized navel oranges, however, can be had for 25 cents, and there are similar prices for tangelos, tangerines, etc. A relative bargain are the Chilean grapes; both red and green seedless varieties are selling for $1.99/pound. Grapefruit prices vary by size and variety, but they are pretty much as inexpensive as they get.

After a week's delay, La Cucina is open for business. In photo at right, Anna Florio leads a class Saturday. Florio offers independent classes as well as programs offered in conjunction with Temple University at the newly requipped kitchen. 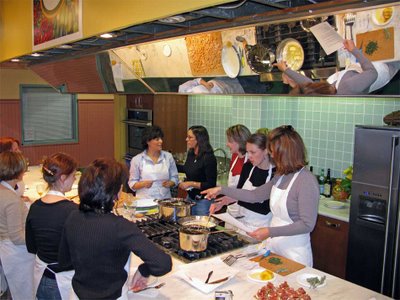 There will be a formal "grand opening" ceremony in March, when the market will recognize the donations to the new kitchen of Electrolux IKON appliances from Airs Appliances, countertop material from DuPont and installation from Unique Designs, and cabinetry from Ikea.
Posted by Bob Libkind at 11:47 AM