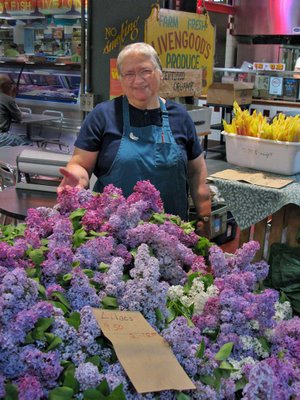 A couple of bushes worth of French and common lilacs brought a delightful fragrance to center court at the RTM yesterday, tended by Joyce Livengood (right). She was selling the French lilacs for $12 a bunch, the common lilacs for $9.50 (two for $18). Livengood's might have them available again next Saturday.

Also on sale at Livengood's this week was Earl's deep green spinach, $3.95 bag. Plenty of Sam Consylman's morels this past Saturday, too. Livengood's begins the farmers' market season this week, putting in appearances at South & Passyunk (Tuesday, 3-7 p.m.) and Fairmount & 22nd (Thursday, 3-7 p.m.) 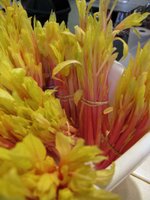 Another specialty of Sam Consylman is poke (photo left; click on any image to see a larger version), whose roots he gathers in the fall then stores in a root cellar until they develop new shoots in late winter and spring. Sam says the young shoots make mighty fine eating. This winter his production was disappointing, but spring seems to have put them back into gear. Plenty were for sale at Livengood's stand Saturday at $3.25 a bunch. 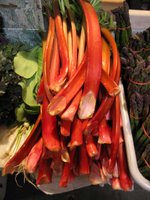 This coming week's predicted warm weather might lead to strawberries next week from some of the region's farmers. They'd go great in a pie with the rhubarb for sale at Livengood's (pictured at right), Fair Food, Kaufman's Lancaster County Produce and other produce vendors.

Both O.K. Lee and Iovine Brothers Produce offered one-pound bags of key limes yesterday. You could save a buck by buying them at OKL, $1.99 vs. $2,99. 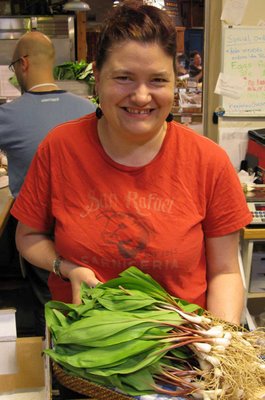 The ramps at Iovine's are considerably less expensive than those at Fair Food Farmstand, but at least judging from what was on the shelves Saturday the quality was a bit better at FFF. Prices were $3.99/bunch at Iovine's, with a bunch weighing in at about four ounces for $16/pound, vs. $27/pound at FFF. Fair Food Farmstand co-manager Sarah Cain proudly displays her bounty in photo at left.

So far 40 merchants have agreed to stay open until 7 p.m. on June 30 and July 1 and 2. No, not because the Independence Day celebrations. It's because 8,000 souls will be attending "New Awakening 2008", a meeting of JAMA, a prayer and spiritual awakening movement arising out of the Korean-American community. Another 8,000 conventioneers can be expected to munch their way through the market May 14-18 when the Oncology Nurses Association meets.

The "tenant obtained" signs are up in the vacant space formerly occupied by Natural Connections and, before that, Margerums. As previously noted, it will be occupied by upscale grocer Jonathan Best, expanding to the RTM from its Chestnut Hill shop.
Posted by Bob Libkind at 12:30 PM