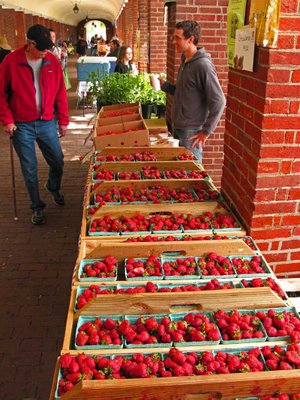 It's only 35 miles from Woodstown, in South Jersey's Salem County, to Center City Philadephia. I'm sure glad A.T. Buzby Farm made the trip to Headhouse Square this morning, especially with the load of red, ripe, sweet and flavorful early strawberries they brought along.

Although we're likely to see even more intensively flavored berries in a couple weeks, these beauties hardly lacked in strawberry-ness. I tasted a couple right after I got home with my haul, but about half the quart has been sliced and now macerating for my breakfast yogurt (maybe with some squished, ripe banana added as well). The remainder will top ice cream for dessert tonight. They were priced at $5 a quart.

At Headhouse, no merchant can sell before the market manager rings the bell, literally. So I stood next to the French radishes at Weaver's Way's stand, blocking all other potential buyers starting at three minutes to 10:00 a.m. (Last week they were gone in a flash). I got mine, as well as a bunch of pristine dandelion greens. Over at Culton Organics I picked up a couple of leeks for $6 (I forget the pound price), which will be grilled to accompany Country Time Pork's chops purchased yesterday at the RTM's Fair Food Stand.

Talula's Table brought along paté this week as well as all those sausages. The summer sausage I bought last week was spot on. No doubt abut it, Talula's is better than the summer sausages I've bought from Miesfield Meat of Sheboygan or Usinger's of Milwaukee, but it's not three times better than a quality commercial version. (Talula charges more than $20/pound vs. the $7.50 you'd pay for a good Wisconsin summer sausage from Miesfield of Sheboygan or Usinger or Milwaukee, and that price includes the shipping). And it's not that Talula's overcharges based on its raw material and production costs; it's just that the larger firms specialize and take advantage of economies of scale Talula's hand-crafted method can't match. So, if you want a six-ounce stick of summer sausage, splurge on Talula's. But if you plan on making sandwiches for a gang, order from one of the Wisconsin butchers.

Pretty much the same lineup of vendors as last week: I counted 26 when I left the market at 10:30 a.m. The only additional vendor this week was a restaurant stall: Sylvie's Crepes, right across the way from La Taquitos de la Pueblos.

Cucumber and Onions, Anyone?

Cukes and onions make a great salad to accompany cold cut sandwiches, grilled meats and lots of other dishes. Both were on sale at Iovine Brother's Produce yesterday. The Vidalia onions were a cheap 50-cents a pound, while decent regular cucumbers (though with a heavy wax coat) were selling four for a buck. Also down in price this week, after many months in the stratosphere: limes, now five for a buck. Juice oranges were 25 cents apiece, and pints of South Carolina strawberries $1. Jim Iovine was also touting the California peaches and aprocits at $1.99/pound.

This week's rains must have killed off the lilacs: Earl Livengood didn't have them this week. He did have some great looking lettuces (I picked up a head of romaine) and asparagus. I bought some of his very fresh eggs, mixed them up with gruyere, parmesan and romano cheeses, heavy cream and made a crustless quiche (inspired by Mark Bittman's Times' column last Wedneday) for dinner last night; I tweaked the dish with some lightly steamed chopped asparagus and gently fried dices of pancetta. Served with Earl's lettuce (and one of his greenhouse tomatoes, some Iovine cuke) and a baguette, it made a great dinner, especially accompanied with a crisp Riesling.

Like artichokes? O.K. Lee had gargantuan specimens for $1.69 apiece.

Local strawberries made their debut at the Fair Food Farmstand, which featured Rineers' crop, which you can also find at some of the area's farmers' markets. The stand also had a sale on some frozen meat products from a variety of vendors: it was priced for sale -- 50 percent off -- because of some packaging issues: won't hold up to long-term freezing, so thaw it now and enjoy.
Posted by Bob Libkind at 12:44 PM