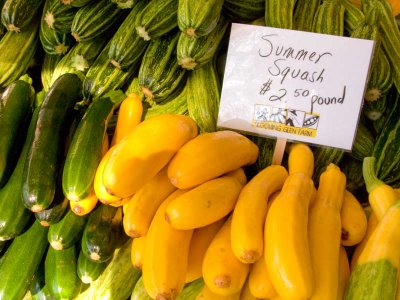 It’s difficult to resist taking photos of the produce at Blooming Glen’s stand at the Headhouse Square Farmers’ Market. They’ve got a knack for creating displays that are not merely photogenic, but allow the produce to sell itself. Piling up everything to at least eye-level helps, too. In addition to the varieties of summer squash shown here were pattypans and clamshells protecting squash blossoms, which were selling for $6 a box. Also at Blooming Glen: escarole and other greens $2.50/bunch, basil $3.

A.T. Buzby had turnips with great-looking greens attached, three for $1. Their summer squash was selling at two fruits for $1 (and the fruits looked heavy, my guess is it was the equivalent of less than $2/pound).

Tom Culton culled some fennel from his crop, to allow the remaining veggies to grow without impediment. That means he was selling the baby culled produce at his stand Sunday, $4/pound. (They were too small to place on the grill, so I dribbled oil over them in a small aluminum pan and cooked them as my spatchcocked chicken was finishing up on the Weber. What’s spatchcock? Glad you asked. Look at this video to learn how to spatchcock, which is nothing more than an improved way to butterfly a bird.) To accompany that chicken, I bought a quart of Red Norland potatoes from Tom for $5, turning them into potato salad when I got home.

Tom also had zucchinis, green and yellow, at $3/pound. Shelled peas were $5 for a half-pint, sugar snaps $5/quart, and loose beets $3/quart.

Want to grow your own mushrooms.?Happy Cat Organics were selling logs innoculated with shitake spores for $12; just place it under a bush or any other place where the sun doesn’t shine (within limits) and become your own mycological harvester.