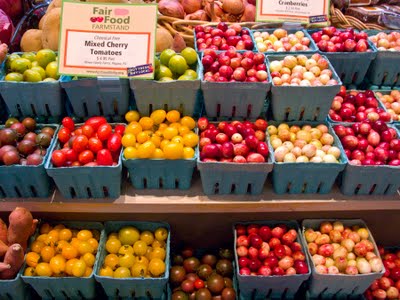 Before the grand opening ceremony for Fair Food's new stall I wandered its aisles to check out the latest offerings.

Thanksgiving may be nearly two months away, but white and red heirloom cranberries from Paradise Hill Farm in Vincentown, New Jersey are much in evidence, making a colorful display next to pints of cherry tomatoes. For those who want to learn how cranberries are grown and harvested, Fair Food is sponsoring its third annual visit to the bogs. It will be held Oct. 25. For more info, email Louisa at farmtours@fairfoodphilly.org. It's a popular tour and includes a look at the farm's antique cranberry-harvesting equipment, so sign up soon.

It's been a sad season for pumpkins, as heavy rains took their toll on the region's crop. Iovine Brother's Produce has been holding the line on price so far, but as we near Halloween expect to pay more for your jack-o-lantern than in past years.

Limes are also dear: the price went up to 50 cents apiece this week at Iovine's. Lemons were three for a buck. A relative bargain are organic green peppers, which were actually less expensive than the conventionally grown variety this week: 89 cents a pound vs 99. Conventional red peppers were $1.49, orange and yellow bells $1.99, frying and hot peppers 99 cents. Ripe Jersey tomatoes were 99 cents. Rutabagas and size of small canteloupes were 50 cents a pound. Red, Savoy and regular green cabbages were 50 cents a pound.
Posted by Bob Libkind at 3:27 PM