Food of a Younger Land 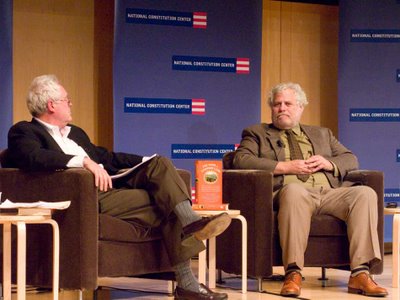 Mark Kurlansky (right) being interviewed by Rick Nichols
Food of a Younger Land is a book of articles originally conceived as a Depression-era Federal Writers Project tome, America Eats. Mark Kurlansky, author of Cod: A Biography of the Fish That Changed the World among many other books, uncovered the onion-skin manuscripts for the unpubished work in forgotten cartons at the Library of Congress, and offers introductions to many of the pieces. Authors range from unknown scribblers to Eudora Welty and Nelson Algren. Kurlansky discussed the book with Rick Nichols of the Philadelphia Inquirer before a modest crowd at the National Constitution Center Thursday evening.

I browsed a few short chapters while waiting for the program to begin and found the book fascinating, from discussions of chowder and the proper way to make a mint julep, to Nebraska Fries and Menudo soup, the articles are a joy.

The original FWP plan was to publish five regional food books as a follow up to its American guide series to every state and most major cities. Editors were named for each of the five regions; they tended to be estabished writers, while the writers of individual contributions on local foodways were mainly aspiring writers, some quite homespun. With America’s entry into World War II the project was abandoned.

CSPANN was there to record the session, so expect to see it any weekend now on the cable network’s Book TV segments.