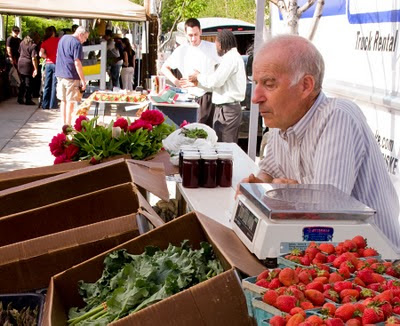 Visits to both the Fairmount and South Street farmers' markets confirm that, indeed, spring has arrived.

Earl Livengood (right) made it to Fairmount last Thursday, along with Sam Stolfus (photo below left) and Wild Flour Bakery. Bill Weller, an orchardist who sells plants for the garden in spring, was scheduled but didn't make it; he's expected either this week or next.

Among the although the strawberries weren't Earl's, which are a couple weeks away from harvest, the veggies were. Most unusual were the baby collard greens, which Earl classified as a mistake. Seems Earl didn't get around to pulling out last year's collard stalks and, what with the warm and early sprint, they started putting out new growth. So Earl harvested the young greens and has been selling them both here and, via a farm-to-chef service, to New York City restaurants where they are a big hit. (Those collards are  pictured below right.) 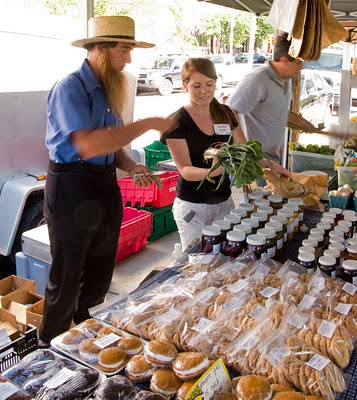 Sam Stolfus (that's Sam with the Food Trust's Melissa Immerman in the photo) started out selling baked goods at the Fairmount market, but in the last few years he's added more and more produce. He had plenty of early vegetables, but even though I arrived just an hour after the market opened, he had already sold out of beets.

Instead, I picked up some storage beets at today's South & Passyunk market at Livengood's stand there, manned by son Dwain Livengood, friend Sam Consylman (who supplied the beets from his cellar), and farmhand John, recently back from his honeymoon. (It's the first time Ive seen Dwain since late 2008. He and wife Audrey spent all of last year on a Mennonite mission in Honduras, where Audrey taught and Dwain established a vegetable garden for a school.) 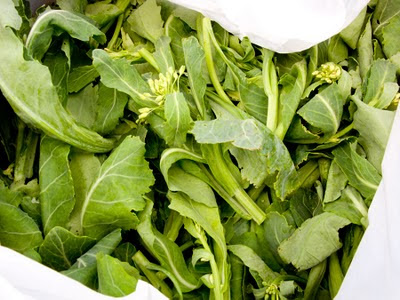 Normally this time of year Sam calls me to say he's got some morels. He went looking, but few were to be had. He kept all he gathered (hardly half a pound's worth) for himself.

The only other vendors at South Street today were Big Sky Bakery and Taproots Farm, a new produce vendor, who had great looking tat soi greens; I bought baby asian turnips, with greens. They'll accompany carbonnade flammande for dinner.
Posted by Bob Libkind at 5:56 PM