More new fishies for the season today, including octopus. Also, over at John Yi's there were fillets marked "Black Cod (Pollock)" for $3.99/pound. Now, if this were truly black cod, a.k.a. sablefish, that would be a bargain, since sable goes for three or four times that price. But this wasn't Black Cod, which isn't a cod at all. It might have been one of two cod-type fishes, however: Alaskan Cod or Alaskan Pollock, the latter being a different variety from North Atlantic Pollack. In any event, the price was hard to resist, so it will be dinner tonight, broiled with a brush of soy (as if it were sable) and served with sauteed bell peppers (a bag of five medium sized mixed colored peppers from O.K. Lee purchased for the grand sum of ninety-nine cents) and tiny sauteed fingerling potatoes from Earl Livengood.

Discount parking rates will go up on or about Jan. 15 at the Parkway garage across 12th street from the market. Instead of $2 for two hours, it will be $3. As noted here in my Oct. 15 post, the fee per car charged to the RTM Merchants Association by Parkway will increase to $5.50 from $5.25; the merchants decided they couldn't eat the increase and wanted to cut the size of their subsidy somewhat. Market Manager Paul Steinke, looking to the bright side, observed that other than the RTM there isn't a single other multi-vendor shopping venue in the city that offers discount parking. Even with the increase, though, the parking discount is substantial versus what lot/garage rates usually are in Center City. However, it's no longer at a par with street meters. As I've cautioned before, don't overstay the two-hours or you'll face the normal exorbitant fees.
Posted by Bob Libkind at 4:27 PM No comments:

Email ThisBlogThis!Share to TwitterShare to FacebookShare to Pinterest
On Friday I made a round of some of the many old-fashioned neighborhood bakeries in The Great Northeast (of Philadelphia). First stop: Haegele's in the heart of a Mayfair residential area: 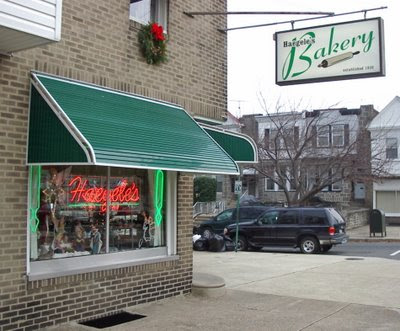 If I lived in Haegele's neighborhood, my blood sugars would be even higher! I restrained myself (knowing I was going to hit a number of other bakeries), however, and departed Haegele's with merely a pound of Christmas cookies and a small bag of springerle. The springerle (to be found in all of the German bakeries I visited) were intensely anise; hard to eat one of these without a strong cup of coffee in hand.

Next stop was Mayfair Bakery on Frankford. Okay place, but not among the winners.

Geiger's, a few blocks up Frankford and across the street, was very much into cakes with illustrations (as is Mayfair). Picked up another pound of Christmas butter cookies.

Now I cut over to Castor and the first of two stops at kosher bakeries. At Weiss I went bananas. Well, no bananas, but good looking challah (I picked up a small raisin challah for french toast later this weekend). And seven layer cake! My favorite! I bought slices of both the yellow and mocha versions. Taste tests later tonight. Strictly in the name of science.

Further up Frankford is Hesh's Eclair Bake Shoppe. More of the same as at Weiss, but they also had onion board. A big piece of this poppy-encrusted, oniony flatbread became my lunch. And a very good lunch indeed. At both Hesh's and Weiss I also restrained myself by not picking up any sweet munn (poppyseed) pastry rolls.

Onward toward Fox Chase. First stop there was Shenk's Family Bakery on Verree Road just south of Rhawn. Limited myself to half a pound of cookies. The hammentaschen looked good here, too.

Past Oxford Avenue I hit Danish Bakers, which is a bit of a misnomer. It's not owned by Danes and I didn't spy any of the real Danish baked goods you'd find in Aarhus or, for that matter, Racine, Wisconsin (the clerk didn't know what kringle was!), but they had a nice selection of various cakes and pastries nonetheless. I left with a cylinder of cinnamon bread (sliced).

My final stop had nothing to do with sweet baked goods, but it was a pantheon to pork: Rieker's, the German butcher-deli. Here I let loose a bit, purchasing a bunch of different sausages to cook in their wine kraut tonight, a smoked pork butt for Saturday or Sunday, and a buckling, a style of smoked herring.

All in all, a most rewarding visit to the Great Northeast, with lots more to cover in the future. It's a polyglot area with cuisines to match. Lots more to explore, including the Russian, Brazilian and Asian neighborhoods, among others.
Posted by Bob Libkind at 3:35 PM No comments:

The Reading Terminal Market Corporation board yesterday voted to extend the trial of Sunday openings through the end of the first quarter 2007, according to Paul Steinke, market manager.

This will definitely be a test, since the first quarter is a slow time at the market: few "feasting" holidays, little in the way of local produce, bad weather. Results from this fall, however, have been very encouraging.
Posted by Bob Libkind at 12:38 PM No comments:

It's beginning to look a lot like Christmas at the RTM's fish stores. This past weekend Golden offered whole sardines at $3.99, John Yi spearlings at $1.99. Expect to see greater variety as we approach Christmas.

The capon I purchased from Giunta's Prime Shop ($3.79/pound iirc) was absolutely delicious: this big bird, which tipped the scale at over 10 pounds, cooked up incredibly juicy after a less than two hour visit to the oven (first 20 or 30 minutes breast down at 450, remaining time breast up at 375; basically you roast until internal temp at thickest part of the thigh hits 165). Minimal basting with olive oil, thyme, black pepper, salt mix over first 30-40 minutes; after that the bird renders plenty of its own fat to keep it moist. It was an Eberly-branded bird. Served with a potato-celeriac puree from veggies sourced at Earl Livengood's.

Glad to see Fair Food has added Valley Shepherd Creamy cheeses from Long Valley NJ. I've been meaning to get up there to buy some; now I don't have to.

Surveys of merchants show overwhelming support for the Sunday hours. Here are a few of the results from the survey of merchants who have been open one or more Sundays during this evaluation period:

Asked whether or not it's been worth it to be open on Sundays, nearly 92% of the merchants said yes.

When asked their druthers on continuing Sunday openings, more than 60 percent responded with an unqualified yes; 27 percent wanted only a limited extension of Sunday hours; the remainder opposed Sunday hours.

The results of shoppers surveyed were also overwhelmingly positive.
Posted by Bob Libkind at 3:10 PM No comments: