Enjoying the fruit of the South

I'm in Savannah this week, so no Philadelphia-centric market report until after my return.

There's nothing even resembling a public market here. The one place called that, City Market, is an attempt to bring back the days when there was a central gathering place for grocers, produce sellers, etc., and it's a fine place to meander into the souvenir and candy shops, but a public market it ain't.

There was a sure sign of spring in a produce market around the corner from my accommodations: local strawberries. Well, nearly. They came from Metter, about 65 miles west along I-16. Red color nearly all the way through, good strawberry flavor and a touch of sweetness, nothing a minimal addition of sugar couldn't help along. And a $2.50 a pint, not exorbitant. Not peak season berries, just a tad early.

I have been eating a lot of shrimp, even if the local shrimping season doesn't begin for another month with the blessing of the fleet; in the meantime, there's nothing wrong with frozen local shrimp. Tuesday was shrimp, greens and grits (in the form of a fried cake) at a tourst restaurant at City Market, and done very nicely. Yesterday on a trip to Tybee Island, a family beach community about 15 miles west of downtown Savannah, I indulged in a Low Country Shrimp Boil: half a pound of shrimp, half an ear of (frozen) corn on the cob, a couple of red new potatoes, and thick slices of a kielbasa-like sausage (along with a beer). Fun meal to eat by the bay; each table at the restaurant (The Crab Shack) had a hole in the center above a trash can so you could dispose of the shrimp shells.

I've visited three local bakeries with mixed success. The first, Harris Baking, is just a short walk from the flat we're renting in the historic district. Excellent croissants, as good as any I've had in Philadelphia. Very buttery. Good strong coffee, too. Other than the croissants and savory breakfast tarts, though, Harris Baking concentrated on sweets, with the accent on pastries rather than cakes. The concentration on sweets was the case at the two other bakeries visited. Though the Back In The Day Bakery makes an excellent baguette, their bread offerings are limited to just two or three varieties a day (they also had a sourdough round when I stopped by, and would be putting out ciabatta a bit later). Cupcakes, however, are another matter: a rotating variety as well as everyday standards. She Who Must Be Obeyed complained that the Chocolate Dream cupcake (which appears every day) was a bit on the dry side, though the crumb was tender and the frosting rich. Back in the Day also featured plenty of cakes. The third bakery, Baker's Pride, was not worth the visit: again, 90 percent of the items were sweet, and overly sweet at that: it was hard to find an item that wasn't over-sugared, over-glazed and over-frosted.

I occasionally make greens at home and or order them out (at Fran DeBreaux's, for example), but they sure do know how to make them hereabouts. The collards served with my shrimp and grit cakes were as tender as could be and tasty with that decided hint of pork fat. Another restaurant, Sweet Potatoes, showed a lighter touch with the Southland's favorite green vegetable, using lemon to perk them up, but apparently omitting the pork for a lighter touch, which was true in all the dishes we tried there, including the eponymous salad (just like regular potato salad, but lighter and better) and the sweet potato-apple mash. And, this being Georgia, the bbq sauce served on SWMBO's chicken and my meat loaf were both peach-based.
Posted by Bob Libkind at 6:33 AM No comments: 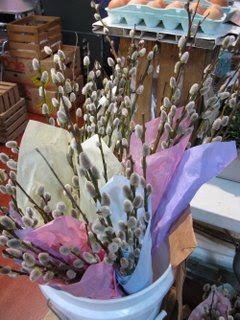 It's officially spring. No, I don't mean the movement of the tilt of the Earth on its axis to create the vernal equinox.

No, the true sign of spring can be found at Earl Livengood's stand at the Reading Terminal Market. To eat, he offered young, tender dandelion greens this morning; to enjoy visually (or tactually) you could purchase pussy willows. 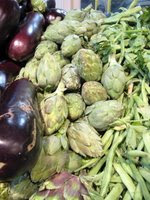 Over at Iovine Brothers, Brother Jim explained how they manage to sell organic green seedless grapes ($1 a bag for a bag that, by my estimate, weighed a pound and a half) for less than the conventional variety ($1.99/pound): A Walmart or other big buyer "kicks" a lot, sticking it to the distributor who has to find another buyer. When a distributor has produce that just has to move, they've got the speed dialer on their phone set to Iovine's. (As always, click on a photo to see a larger version.)

Other relative bargains at Iovine's this morning: bags of California clementines for $3.99 and one-pound clamshells of Florida strawberries for $1.99. Not such a bargain, but still a welcome seasonal addition, were the baby artichokes, $3.99/pound. Lemons and lines still exorbitant at 50 cents each. 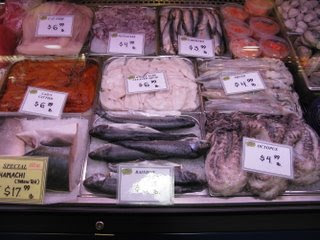 The price of the gutted, headless sardines at Wan's seafood went up to $3.99/pound, but the price of whole sardines at John Yi fell to $2.99. The latter's refrigerator case of cephalopods, fresh water salmonids, and clupea harengus looked particularly attractive today.

Young's Flowers has given up its Saturday daystall in the market due to insurance costs. They are still expected to sell when the Headhouse market gears up later this spring.

Market management is near a deal to fill the vacant space most recently occupied by the natural food store and, before that, Margerum's. The new vendor will sell a range of packaged grocery items (trending to the gourmet/high priced side), so if you need that canned broth or ketchup to complete your recipe you won't have to make a second stop elsewhere. This will be the vendor's first expansion beyond his current single store in another section of the city. 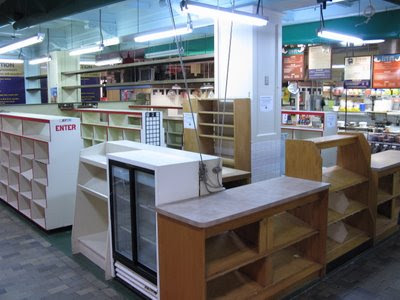 It's not spring yet

A couple of interesting veggies popped up in Iovine Brothers' bins this week.

First, asparation. No, not as in a small burst of air, or the entry of secretion into the lungs. That's aspiration. I'm talking about asparation, which is the trademark name for broccolini, a cross between broccoli and Chinese kale. Didn't see a price, but given that it's a trademarked-veggie, I would expect it not to be cheap. But it did look interesting: a stalky broccoli, but of daintier proportions than broccoli rabe.

In the same bin could be found cardoon, a southern European winter vegetable. At first glance it looked like a giant, dull bunch of celery stalks, but botanically it's closer to the artichoke, as it is a kind of thistle. That means it takes a bit to prepare properly: trimming and de-ribbing, cutting and dipping in acidulated water to prevent browning before braising. It's $1.99 a bunch, which looks like it would be enough for four or five servings as an appetizer or side. Bet it would be good in a cream sauce after preliminary cooking.

The Mexican avocado crop has arrived, and that means lower prices. Iovine had medium-sized ones at 50-cents apiece. Limes, alas, are the same price. Outside of the various greens (I picked up some escarole to braise with raisins, capers, pine nuts and olives this week), one of the better veggie values was the frying peppers, $1.49/pound.

With enough daylight at dinner time to fire up the grill, I picked up some beef (chuck with some short rib) ground to order at Harry Ochs yesterday, but when I passed Wan's Seafood I couldn't resist the sardines. They had already been headed and gutted and were selling for $2.99/pound. I was a tad wary, because other fish mongers were selling them whole for a buck more, but these were firm and smelled fine. They cooked up even better. I had a few right off the grill yesterday as an appetizer, but ate most the rest for dinner tonight after concocting a curry sauce for them to bathe in, trying to duplicate a curried pickled herring I tasted at Aquavit. It tasted delicious but, because of the textural delicacy of the grilled sardines, turned into a spread. Next time I'll also add some beet for color, because when sardines get mashed up, they are decidedly gray. I'll also start with pickled herring: the flesh is firmer and doesn't break up as easily.

I've gotten so used to microwave popcorn that I've forgotten how easy it is to make the old fashioned kind; the pot cleans up easily enough. Ben Kaufman has a couple of different varieties; the "red" popcorn I bought last week popped up fluffy white, with just a speck of red left in the nearly hulless hull.

According to a new video, 16 of the 73 shops at the Reading Terminal Market are owned by immigrants. That's the crucial fact behind the message of a video produced by the U.S. State Department aimed at foreign viewers. Featured are the owners of Nanee's Kitchen, Profi's Creperie, De' Village, and Tokyo Sushi Bar. You can find the two-minute video here.

Want an egg broken over your head? It will bring you good luck and go to a good cause. It's the cascarones tradition, which has been growing in popularity in the Mexican community, especially at Easter. The hollow eggs are filled with confetti then "cracked" over your noggin by a friend. The cascarones decorated by local children will be sold at the market March 19-22 to benefit the Cascarones Por La Vida Art Fund, which benefits children with HIV/AIDS. The project is led by local artist Marta Sanchez.

RTM General Manager Paul Steinke will be co-host with Sonny DiCrecchio of the Philadelphia Regional Produce Market when the National Association of Produce Market Managers holds its annual meeting at the Loew's hotel at the end of the month. Members of the 60-year-old association come from not just public markets and year-round farmers' markets, but wholesale markets, too. Among the speakers will be David O'Neil, who as RTM manager under the Reading Company helped plan its revitalization, and April White of Philadelphia Magazine.

Kelly Novak, the RTM's marketing and event coordinator, is leaving at the end of the month, so the search is on for a replacement. If you're interested in the job, check out the market's website for details.
Posted by Bob Libkind at 12:35 AM 2 comments: