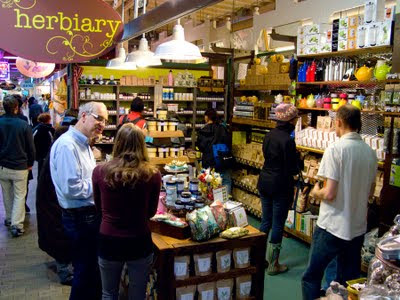 The Herbiary opened for business Wednesday at the Reading Terminal Market, just in time for the Flower Show. They specialize in medicinal herbs, tinctures, essential oils, dietary supplements and other plant, and nature-based remedies. The Herbiary is located adjacent to Contessa's French Linens, across from the Cookbook Stall.
Posted by Bob Libkind at 1:57 PM No comments:

Email ThisBlogThis!Share to TwitterShare to FacebookShare to Pinterest
Labels: herbiary, rtm
A Hake is a Whiting is a Mountain Trout?

For years I've been looking at "Mountain Trout" displayed as filets at the Reading Terminal Markets' fishmongers, knowing full well they weren't trout, but not quite sure what they were. Down in Baltimore they call this "Lake Trout".

Today I noticed (at Golden Fish) a sign which identified them, parenthetically, as hake, which is a member of the cod family, as is its very close cousin, the Whiting, which is usually found hereabouts as Silver Whiting, but sometimes called Silver Hake, as if things aren't confusing enough.

All the varieties are interchangeable, as least as far as culinary purposes are concerned. All are suitable for frying, steaming, poaching and baking, though broiling or grilling would be too extreme for these delicate and very mild-tasting fishies. Hake are the most popular fresh fish in Spain, and take particularly well to parsley and potatoes.

In other seafood news, Golden Fish is carrying a new item, head-on shrimp, $7.99/pound. You could probably save a bit by walking over to Chinatown, since that's where Golden procures these formerly frozen farm-raised crustaceans from China.

In the event you're wondering, the King salmon at John Yi (and just abou anywhere else) is farm-raised from British Columbia. Like it's Atlantic cousin, it gets its color from feed.

Cucumbers galore at O.K. Lee, including two seedless (or nearly so) varieties: Japanese and English. The former are a buck for what appears to be a one-pound bag with about six of the five or six-inch cukes. The latter are two 16-inches for a buck.

OKL also has bags of green seedless grapes for a buck (a tad more expensive if on trays) and Hass avocados at 49-cents apiece (essentially the same price as Iovine's where they're two for a buck).

Another cucumber-like item normally found in Chinatown made its way to the RTM today: Iovine Brother's had Bitter Melon sitting next to the bell peppers, $2.99/pound.
Posted by Bob Libkind at 1:39 PM No comments:

In early December at the Headhouse Square Farmers' Market Beechwood Orchards featured Newtown Pippin apples, a variety that dates to the early 1700s, first found in what is now the New York City borough of Queens.

It is regarded as one of the great storage apples, i.e., it improves with age. And February is regarded as the peak month for its eating. So the other day I pulled one out of the fruit bin of my fridge (stored in a plastic bag with plenty of air holes).

It was superb, and a contradiction of complex flavors: sweet and tart, crisp and tender. It's an apple with depth. Much superior to when I tasted it immediately after purchase. And it stored beautifully, with no soft spots or blemishes beyond those present when picked.

I'll be sure to lay in a supply again next December.
Posted by Bob Libkind at 7:54 PM No comments:

The bargain of the week at Iovine Brother's Produce at the Reading Terminal Market appears to be lettuce.

Displayed front and center today were four varieties, each priced at two heads for a buck: Romaine, Green Leaf, Red Leaf, and Iceberg.

Although there's nothing wrong with a nice green salad, or a wedge of Iceberg with freshly made blue cheese dressing, it seems a good time of year to consider making Lettuce Soup. Cooked with some potato, one of more members of the allium family, and herbs, pureed and finished with a wee bit of butter, it's a fitting dish for winter, but a relief from root vegetables.

The Chilean grape harvest is approaching peak, and prices have dropped accordingly at Iovine's. One-pound clamshells of white seedless were available for a buck, tray-packed bunches for $1.49. Iovine's also had a variety labeled "Tomcat", but at $5.99/pound I passed them by. They are a variety of Muscat, one of the original grape varieties, and are sweeter than the norm.

It might be a good week for making guacamole. Iovine's also featured ripe and ready avocados (don't store them for long!) at 50 cents apiece. Limes were a reasonable four for a buck.

Over to the fishmongers. I haven't done a taste comparison, but Golden Fish has been selling "dry" scallops for $13.99, a considerable savings versus John Yi, where they sell for $17.99. Golden also has something I haven't seen at the other stalls: unagi, Japanese barbecued eel, $6.99 a pack.
Posted by Bob Libkind at 7:41 PM No comments:

This being the winter doldrums, at least as far as fresh produce is concerned, my posts normally decline in quantity this time of year. This winter of near-blizzards is no exception, but the weekend before last caused me to alter my opinion, slightly, about a root vegetable I've regularly slighted: the humble rutabaga, a.k.a. Swede, a.k.a. Yellow Turnip.

The cause of my conversion is the delicately-flavored smallish specimens which have been on sale at the Reading Terminal Market's Fair Food Farmstand since the onset of winter. They hail from Vermont's Deep Root Organics. a cold storage coop on the northern climes of the Green Mountain State.

Along with parsnips from the same coop and supermarket "baby" carrots, they became the vegetable component of a Valentine's Day dinner I composed for my Valentine, who has always held the rutabaga in high esteem (must be her Scandinavian heritage). I cut the veggies into half-inch dice, tossed with a minimum coating of olive oil, along with a little thyme, salt, pepper, a scant teaspoon of sugar (to encourage browning) and roasted them in the oven.

To my amazement, the rutabaga actually tasted good! Maybe it was the sugar, maybe it was the roasting, since my previous encounters with rutabagas had always been simply mashed with butter. But these roasted rutabagas had a more subtle countenance than the mash, so that the flavor note I previously found offensive became appealing. Will wonders never cease?

The veggies accompanied filet mignon, a cut she enjoys but I rarely prepare for myself because of its lack of flavor compared to other cuts of steaks, though its tenderness is always to be admired. This beef came from Harry Ochs, and the combination of high quality beef and the method of preparation made it a hit, even with me. I simply seared it in a pan, three minutes on a side over medium high heat to get a nice char (not disturbing the meat except once, to turn turn it), then finished it off in a 450F oven for another four minutes for medium, my Valentine's preferred doneness. While it rested on a warm platter under foil, I made a pan reduction with cream sherry finishing with a small knob of butter. Although I prefer my steaks rarer, this retained just enough pinkness to remind it came from a living thing, and had great flavor.

Dessert was a sampling of truffles from Neuchatel Chocolates of Oxford, Pennsylvania, every bit as good as any truffle we've had. The creations from Swiss chocolatier Albert Lauber can be had at the Pennsylvania General Store.
Posted by Bob Libkind at 7:22 PM No comments: