Now online. Here are the links:

All cold storage has moved to the basement as work begins on two family bathrooms under the market's mezzanine management office. Once the new lavs are ready, temporary access changes to the men's room will be made so that work can begin on the new home for La Cucina at the Market.

Meanwhile work is underway at DiNic 's new center court location in the former Harry Ochs space; owner Tom Nicolosi hopes for a late November opening. L. Halteman, which will shift west to take over the former flower vendor space, has positioned a new refrigerated display case there in anticipation of its move later this fall.

One casualty of the renovations has been the market's free wi-fi service, which had to be temporarily shut when work started on its remodeled mezzanine offices. When the new office opens about mid-November a new and improved wi-fi system will be installed.

Posted by Bob Libkind at 4:18 PM No comments:

The only detail to be resolved is whether customers can take beer into center court to enjoy with items bought from other market vendors. Jim Iovine told me their license allows them to sell beer for consumption in market seating areas, but they have yet to present their request to market management, which must also approve any such plan.

Paul Steinke, the RTM's general manager, told me today that when the Iovines get around to making a formal request "it's a policy matter we have to deal with." Beyond operational issues, liability will be a key question, i.e., who's the responsible party for an alcohol-related incident outside of Molly Molloy's but within the market? Until that's resolved, you'll have to enjoy the craft beers offered by Molly Molloy's within the confines of the gastropub.

Although beer sales are strictly on-premises for now, there is a take-out counter for food. I tried it for a late breakfast this morning and found chef Bobby Fisher's French toast with berry sauce quite good, accompanied by a sagey scrapple. While I was enjoying that at a center court table, Tom Nicolosi of DiNic's had an early lunch of something else with French in its name: onion soup; he noted with approval that it was made from homemade stock, not an institutional salt-based broth.

No menu has been posted at the restaurant's website yet, but Menupages has one, even if they misspell its name.  Hot sandwiches include braised oxtail, pork belly, rib  eye, pulled chicken, and burgers. Irish beef stew, fish and chips, short ribs and chicken pot pies are among the entrees. And since the bar's focus is beer, there are wings.

There isn't a lot of overlap on the menu with what's offered by other RTM lunch vendors, but of all the others the one most likely to be concerned would be the Down Home Diner, which also offers a large seating area independent of center court and similar foodie aspirations. My guess is that Molly Molloy's won't so much take away business from the Down Home Diner as grow its own volume. And if it gets permission to sell beer in plastic cups for travel to center court, it can only help other sandwich vendors (though their profitable soft drink sales may suffer). 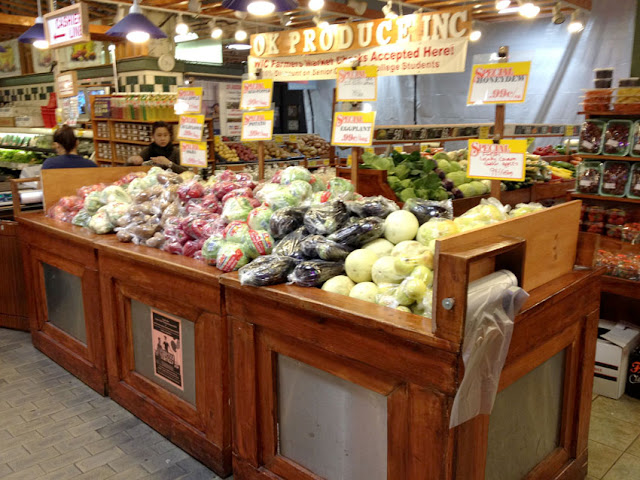 Produce vendor O.K. Lee has gotten into the spirit of the Reading Terminal Market's renovations by replacing its display tables. The finished wood displays are a significant visual improvement over the more rustic displays they replaced.
Posted by Bob Libkind at 2:29 PM No comments: 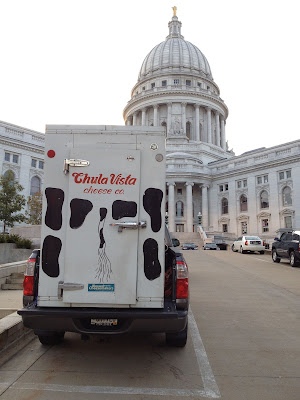 Back in Dane County

The stars are shining bright when I arrive shortly after the official 6 a.m. Saturday opening of the Dane County Farrmers Market in Madison, Wisconsin. This is America's Dairyland (the auto license plates say so), even under the state capitol dome, as the Chula Vista cheese truck attests.

After my initial walk around Capitol Square, where about a hundred vendors are setting up shop, and a leisurely cup of coffee in the Starbucks, dawn breaks and I repeat my farmers market circuit, this time going counter-clockwise around the big block, which is the required direction; go clockwise and you'll get polite stares from the other early shoppers.

All my previous visits to this market (probably the nation's largest true farmers market; you can't sell here unless you grow, raise or make it yourself) have been in early spring when meats, cheeses and baked goods predominate with only a scatteing of early spring crops. Today, however, boasted the last of summer and hearty fall fare. Four or five vendors offered late season raspberries, many others had tomatoes (some, though, finished under hoop houses), but there were plenty of winter squashes and apples, too. 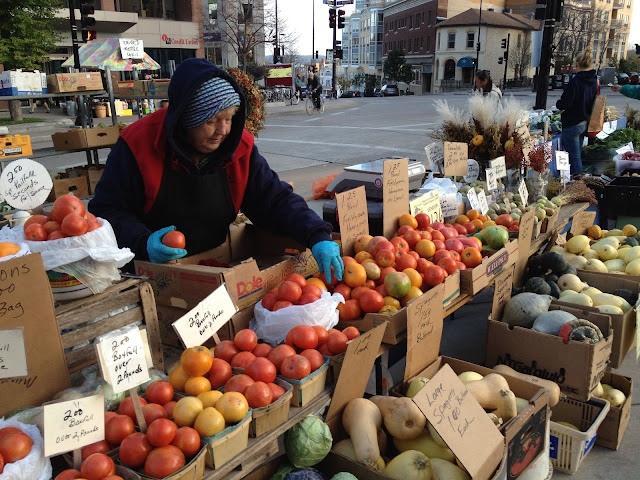 The grower pictured above was selling a great variety of tomatoes, including heirlooms, all grown in the field without benefit of hoop houses. At less than a dollar a pound these beauties were bargains.

Apples, however were my main area of interest, since they were one of the few products I could bring back to the hotel and maybe even back home to Philadelphia.

For those with any interest in learning about these or any other variety, I commend the Cox Orange Pippin website, which hardly limits itself to my favorite variety.

My words can hardly do justice to the variety of produce I discovered this morning, so pictures (annotated with a just a little verbiage) follow. As always, click on a photo for an enlarged version.

PorcSalt's Nitrate-Nitrite Screed
A welcome riposte to the food police

For centuries, according to Matthew Ridgway of PorcSalt (Headhouse Square's newest vendor, selling some awesome, though necessarily pricey, charcuterie), meats were cured with salt and saltpeter, a.k.a. sodium nitrate, which when in contact with natural bacteria in meats is converted to nitrite. Today, pure nitrite, or in combination with nitrite, is used in exceedingly small quantities by commercial bacon, ham and other commercial cured meat manufacturers.

At his Headhouse stall today, amid the bacon, guanciale, and foie gras, Matthew had copies of a "white paper" on his table entitled "The Truth About the Dreaded Nitrate..." In it, Matthew recounts the misleading nitrate cancer-scare of the 1970s and exposes the sham of the "no-added nitrate" products sold by Whole Foods and other purveyors.

By using dried celery juice in the cures, these "no-added nitrate" products have considerably more nitrate-nitrite than commercial products. The fact that these nitrates are derived from vegetables rather than natural minerals is irrelevant: nitrate is nitrate, nitrite is nitrite, no matter the source -- it's the same molecule.

Now, this doesn't mean that the added dried celery juice (or mineral nitrate) is a bad thing. It's made "natural" hot dogs and hams much more palatable (the truly nitrate/nitrite-free versions are awful) and considerably safer than they would be without them.

Unfortunately, the U.S. Department of Agriculture prohibits meats cured with pure nitrate or nitrate from being labelled "organic" or "natural", Matthew writes. So the marketers go out of their way to use the vegetable-based nitrates, even though celery has 400 times the nitrites of a slice of commercial bacon, according to the cured meat maven. You'd get considerably more nitrites from a serving of spinach than commercial bacon.

As Matthew concludes, "Numerous scientific panels have evaluated sodium nitrite safety and the conclusions have essentially been the same: sodium nitrite is not only safe, it's an essential public health tool because it has a proven track record of preventing botulism."

No wonder Dr. Brown's Cel-ray Tonic (my favorite quaff with a pastrami sandwich, cured with nitrate/nitrite) was originally marketed as a health food.

Stop by Matthew's PorcSalt stall at either Headhouse or the Saturday Rittenhouse market to pick up the white paper slong with some of his tasty charcuterie.
Posted by Bob Libkind at 4:35 PM No comments:

More vendors sold their goods at the Headhouse Square Farmers Market today than any other Sunday so far this season. Katy Wich, who manages the market for The Food Trust, said 34 different vendors showed up today, including one new one, PorcSalt, which has been an occasional vendor at the Rittenhouse Saturday market this year.

With produce tables groaning under the weight of apples, squashes, potatoes and other harvest goodies, it's my favorite time of year to wander farmers' markets.

Because the larder's rather well-stocked at home, my purchases were minimal. The only "must" item on my list was apples.

And what a selection! Three Springs, Beechwood and North Star all offered great variety, most priced at $2 to $2.50 a pound -- more than what you'd pay at the supermarket, but all fresh-picked off the tree.

My big score was an Espopus Spitzenberg. This apple holds a special place in my heart, but not merely because it tastes so good (definitely on the tart side, but enough sugar to balance it out, plus a crisp, dense flesh). No, it's among my favorites because its named for the creek (Esopus) where I used to swim -- or at least get into the icy cold water -- during family vacations in the northern Catskills, in the Big Indian-Oliveria valley. This apple, great for out-of-hand eating or baking, was available today from North Star. Of all the apples offered by North Star this week, it's the one true antique. It was reputed to be one of Thomas Jefferson's favorite.

Over at Beechwood Orchards, Dave Garrettson offered another American antique, the Northern Spy. Although it can be enjoyed as a dessert apple, i.e., eaten out-of-hand, and is an excellent storage variety, it's highest use is in pies. Since my available kitchen time this week is extremely limited, I reluctantly passed these beauties by.

Instead, I picked up some Macouns, Winesaps and the latter's even tastier offspring, Stayman, all from Beechwood.

Of course, if you're stocking apples for plain eating, you've got to get some cheese as an accompaniment. For that part of the equation I stopped by Sue Miller's Birchrun Hills Farm stall where I picked up her Red Cat. This is a washed-rind cheese, slightly pungent (most washed rind cheeses are stinkier) and creamy.

The main course for tonight's dinner also came from Sue: bockwurst, a traditional German sausage traditionally all-veal or mostly veal with a bit of pork. I'll cook it tonight with sauerkraut braised in unpasteurized apple cider mixed with mustard, maybe throwing in some carraway seeds. Which reminds me, gotta put some beer in the fridge. Although mashed potatoes would be the ideal side, I picked up some rye bread from Ric's.
Posted by Bob Libkind at 3:23 PM 1 comment:

The Reading Terminal Market's annual Harvest Festival will be held Saturday from 10 a.m. to 5 p.m. As usual it will feature hayrides around the block pulled by a farm tractor, caramel apples, freshly made donuts, cider, and a cornucopia of autumnal produce.

Posted by Bob Libkind at 1:58 PM No comments: 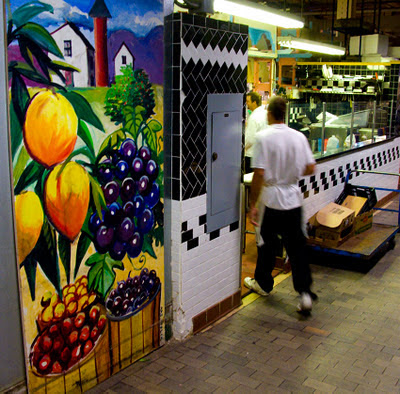 When Iovine Brother's Produce expanded its prep area few years back, the walls came tumbling down and, with them, the rustic, primitive farm scenes painted on them opposite L. Halteman Family Country Foods.

Maybe I missed it earlier, but one of those painted panels remains (pictured here). It's located on the aisle behind Halteman's opposite what will soon become Molly Molloy's, formerly The Beer Garden.

Posted by Bob Libkind at 1:47 PM No comments: