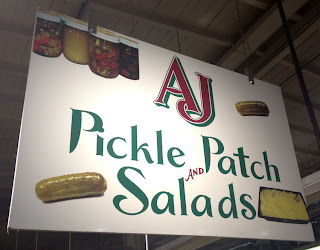 The Reading Terminal Market has needed a full-time donut stand for years, as I've regularly reminded market management at every opportunity since before starting writing this blog. The only time fresh donuts have been available has been during the Pennsylvania Dutch festival and other special events.

In few weeks I'll be getting my donuts. The Bieler family, which operates both Bieler's Bakery and AJ Pickle Patch, is reconfiguring the latter to add the fried treats. To make room, Alvin Bieler will be dropping the packaged, jarred and canned items now sold at AJ. The salads and barrel pickles will remain, and the stall will be renamed Bieler's Donuts and Salads.

Saturday was the last day for AJ. In coming week's the Bieler's will be reconfiguring the space and installing donut-making equipment and display cases.

To clear out the stock, on Saturday AJ was selling the canned and jarred items at $2 apiece: a nice savings considering they retail for $4-$6. I picked up some some pickled vegetables, tomato jam, grape jelly and red currant jelly.

I wouldn''t expect the Bielers to emulate Federal Donuts' exotic flavors. Plain and sugared, perhaps glazed or frosted, with cider donuts in season. Maybe some jelly or creme filled donuts, too. But if you want chicken, you'll have to settle for the rotisserie birds up the aisle at Dienner's -- or visit one of Federal's two shops.

Although Bieler's will no longer sell the canned and jarred items, a similar stock is carried by Kauffman's Lancaster County Produce. Another seller of similar goods (though tending to be international in origin rather than Lancaster Countian) at the market is Jonathan Best.
Posted by Bob Libkind at 11:38 AM 1 comment: 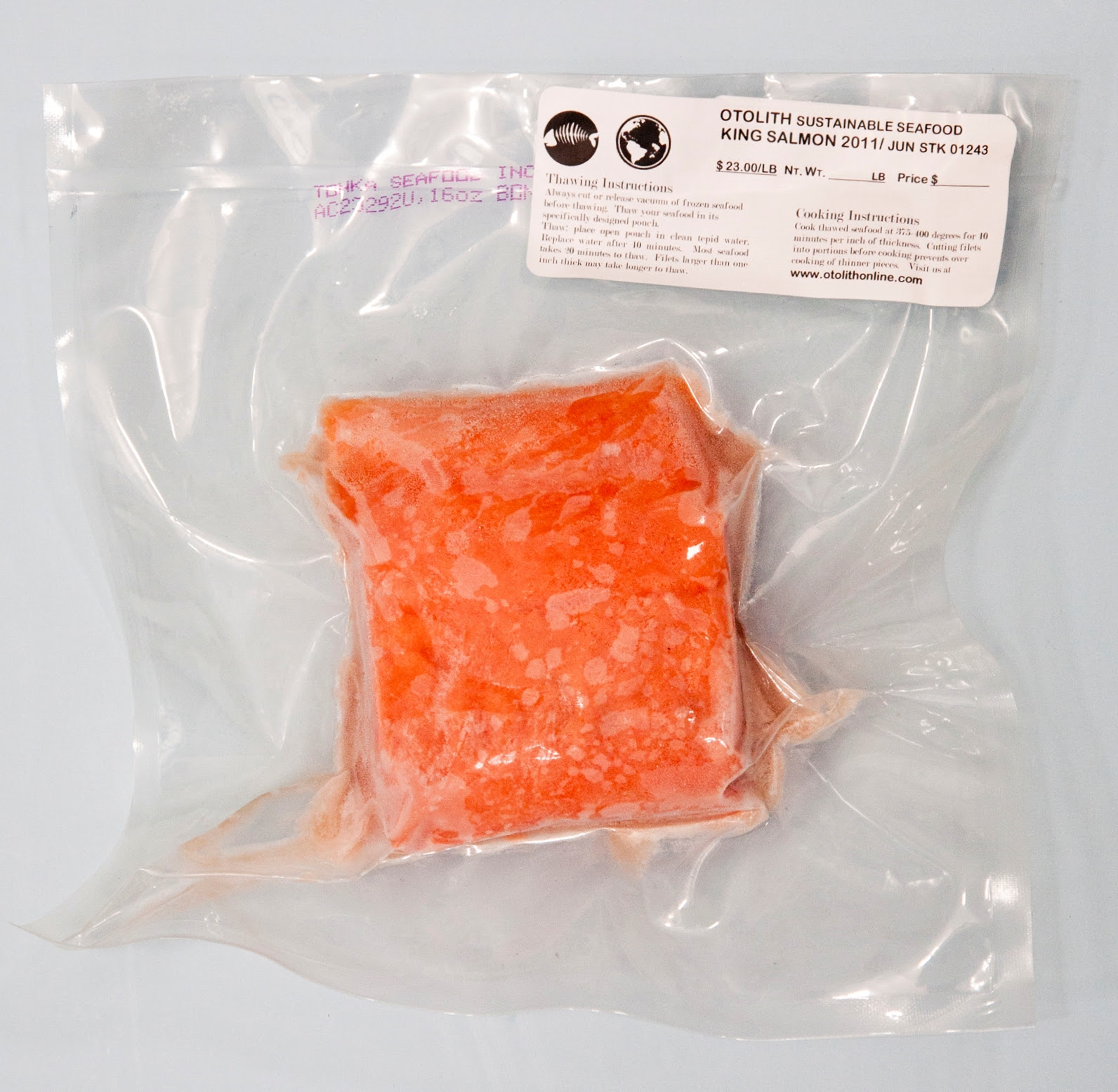 It's not from the Gorton's fisherman, thank heavens. The frozen fish sold at some Philadelphia farmers' markets by Otolith Sustainable Seafood is among the finest fish -- fresh, frozen, dried, cured, whatever -- I've tasted.

This past Saturday I quick thawed (according to package instructions) a filet of King (a.k.a. Chinook) salmon purchased in early November from Otolith's stall at the Headhouse Square Farmers' Market. I cooked it about as simply as you can: hot cast iron pan, maybe a tablespoon or two of neutral vegetable oil (expensive olive oil would be wasted in this application), just salt and pepper as seasoning. The filet (which I cut into two six ounce portions) was a tad over an inch thick, so over the medium high flame with a hot pan it just took a little over 10 minutes to cook. I served it alongside a rice pilaf studded with raisins, pine nuts, gently sautéd onions and par-cooked diced carrot, seasoned with half a teaspoon each fresh ground cumin and cardamom seeds and a teaspoon of ground cinnamon, plus salt and pepper.

The fish turned out succulent, beautifully colored with a deep salmon flavor. The leftover oil in the pan smelled fishy, but the fish didn't. She Who Must Be Obeyed, who detests "fishy" fish, devoured her portion. The crispy skin was a real treat: you could package this stuff and sell it next to the pork rinds at Wawa. If tuna is chicken of the sea, a good salmon is heritage pork.

Although some of the credit goes to the variety of salmon (Chinook is my favorite, closely followed by sockeye) the real reason for its deliciousness goes to the way it was caught, handled, frozen, shipped and stored.

Based on what I could divine from Otolith's website, it appears this fish was caught out of Sitka in Southeast Alaska in September. My guess is the fish was caught by trolling, in which the salmon are hooked and handled individually, rather than gathered with a seine or gillnet. The fish are headed and gutted onboard, iced, then brought ashore where they are quick frozen.

The care in handling is why frozen fish frequently can be better than fresh. That was certainly the case with the Chinook I ate this weekend: it was as good as any salmon I've ever had, including some meals in Alaska and the Pacific Northwest!

This is not a fish for the parsimonious. If I recall correctly, the filets are $23/pound. Still, that's a competitive price: it's what you'd pay for fresh Pacific Northwest Chinook at any qualify fishmonger in season.

Otolith sells most Saturdays throughout the year at the Rittenhouse Square Farmers' Market.. I expect they'll be at Headhouse when it reopens the first Sunday in May. A few retailers also carry Otolith frozen seafoods, including Green Aisle Grocery in South Philly, and, in West Philly, Milk and Honey Market and Mariposa Coop.
Posted by Bob Libkind at 5:47 PM 1 comment:

Doesn't the rabbit on this point-of-sale display look like a low-life drug pusher? 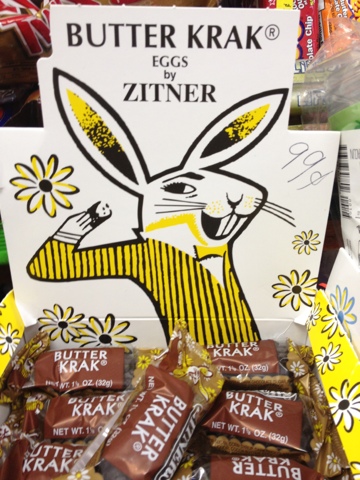 Of Donuts, Hoagies and Cold Cuts 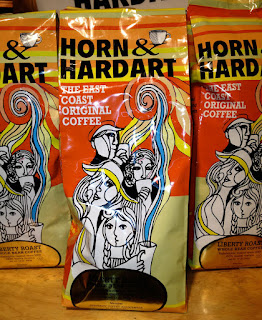 A long time ago in a galaxy far away, before Starbucks and before Dunkin' Donuts, you could get a cup of coffee at the Horn & Hardart automats in Philadelphia and New York City. The last automat closed more than 20 years ago, and the once common high-tech eatery (for the times) has since been the subject of at least one museum show.

But you can still get the coffee.

Even though there are plenty of good hoagies in this town, one of my favorites remains those made by Salumeria, the cheese monger/Italian grocer at the RTM. Especially when I augment their house dressing with marinated artichokes on my prosciuitto or Italian hoagie.

Now, I can get them beyond lunch time. Earlier this year Salumeria extended its hours for hoagie-making until 5:30 p.m. Monday-Saturday, and 5 p.m. Sunday. Now, if only they would start making them before 11 a.m., I could eat one for breakfast.

In addition to sausages the new Wursthaus Schmitz has a nice selection of German style cold cuts. Most come from from Rieker's, the wurstgeschaft in the Far Northeast. I'm a sucker for the olive bologna or veal loaf. Also nice is the suelze, select bits of tongue and other "lesser" cuts suspended in aspic with piquant pickled carrots. If you'd like a purer rendition of tongue, walk over to L. Halteman; although there's still a little gelatine to hold it together, it's more tongue-meaty.
Posted by Bob Libkind at 3:00 PM No comments:

Greengrocer OK Produce (formerly known as O.K. Lee) will expand into the space recently made available when Nanee's Kitchen moved within the Reading Terminal Market.

Although it will remain smaller than the market's behemoth produce vendor, Iovine Brothers,  the additional square footage will make OK's operation more efficient, as well as creating additional selling space

The agreement for OK to take over Nanee's old spot fills in the last remaining leaseable space at the market, according to Paul Steinke, the RTM's general manager. "It's a nice position to be in," he acknowledged.

More space could open up, however, if Downtown Cheese succeeds in lining up financing for a move it's been considering to the market's Piano Court, opposite Metropolitan Bakery and Golden Fish Market. Under that plan, Downtown Cheese would take over most, but not all, of the Piano Court seating area.

Of course, if Downtown Cheese stays put, it's not beyond the realm of possibility that Steinke would turn some of the Piano Court into vendor space.

Border Springs Farm has won the market's approval for the design of its stall, to be located in the former Basic 4 space across from Godshall's and Franks-A-Lot. Owner Craig Rogers, who still has to obtain various city approvals, hopes to be open in six to eight weeks. Too bad the lamb purveyor won't be open in time for Easter.
Posted by Bob Libkind at 2:59 PM No comments:

Besides my own personal inertia, one reason this blog hasn't been updated regularly has been the lack of excitement in what's available at the produce markets. It is, after all, late winter, with no local produce (except for what's coming out of hydroponic growers), and the opening of farmers' markets is about two months away.

Even the citrus fruit offerings haven't been inspiring.

And while I like greens, there's a limit to how much kale I want to eat. (Has anyone else notice what a "hot" food item kale as become this year?)

Still there is some interesting produce out there, so long as you're willing to open up your wallet and let the food miles pile up, especially for items coming in from Mexico and South America.

Iovine's Produce, for example, had some asparagus today. And the bagged red and green seedless grapes are nice and reasonably priced at $2.99 for a two-pound bag. Fresh chickpeas (garbanzos) in the shell remain on Iovine's shelves for $3.99/pound. Alas, frying peppers, which for the last three weeks have been priced at a bargain 79 cents a pound, have nearly doubled to $1.49. Green bell peppers, though, were 99 cents today.

Any decent sized orange will set you back 50 cents, though smaller ones can be had at three for a buck. Florida juicers are 4/$1. A dollar's worth of lemons (3) can probably be squeezed enough to generate enough juice for a lemon meringue pie (it did for me a few weeks ago).

I'm not a big egg eater, but the difference between what supermarkets sell and what's available at the Fair Food Farmstand is amazing. Fair Food's are considerably fresher, with deep orange yolks that hold their shape. Yes, they are pricier -- even Fair Food's non-organic eggs are $3.50/dozen -- but when you've got eggs this fresh and good available it's worth the premium. They made a rich lemon curd and pristine meringue for that pie.

Though still a bit dear, the price of broccoli rabe has eased a tad, much to the relief of Joey Nicolosi of Tommy DiNic's. Joey experimented with other greens, and especially liked the way Swiss chard worked with the sandwiches, but he's sticking with rabe and spinach as the offered greens.
Posted by Bob Libkind at 2:57 PM No comments:

Rick Olivieri is trying a third new location for his Rick's Steaks business after flailing at two others following eviction from the Reading Terminal Market,

A Chester County newspaper reports that In April Olivieri is due to open at a new market/food court in suburban Kennett Square close to the mushroom farms that some non-purists like to put atop their cheesesteaks.

Initially Rick landed at the food court at the Bellevue. When that didn't work out he moved to Liberty Place. That, too, came to an end.

Will the third attempt at reestablishing his brand work?

Here's the story from the Daily Local News.
Posted by Bob Libkind at 6:23 PM No comments: