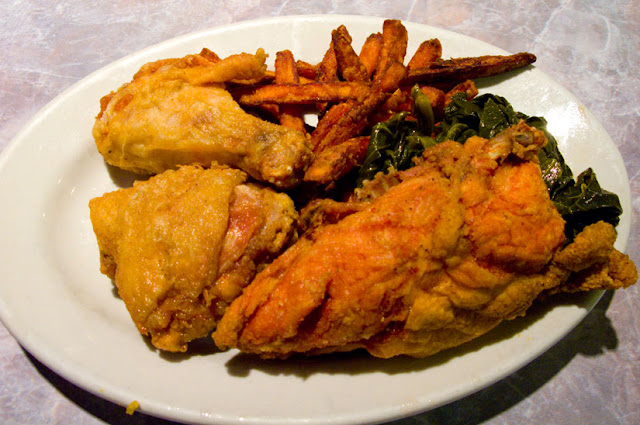 The Down Home Diner, on the Filbert Street side of the Reading Terminal Market, is open until 10 p.m. When the market is closed, enter via Filbert Street, a.k.a. Harry Ochs Way.
Posted by Bob Libkind at 10:22 AM No comments: 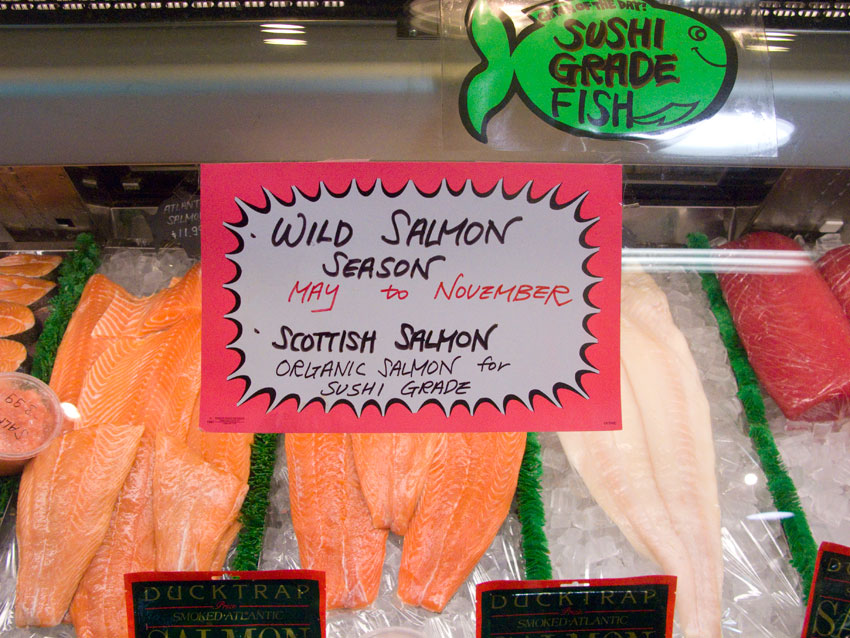 Golden Fish Market's sign makes it clear, if only by implication: it's all farmed salmon right now. Also spied today at Golden, skate at $6.99/pound. Previously, only Wan's Seafood handled skate.
Posted by Bob Libkind at 10:46 AM No comments:

Jack McDavid hopes to be serving alcoholic beverages in a few weeks at the Down Home Diner. With his restaurant now open until 10 p.m., that's got to be good for business. Although he won't have a bar serving freshly mixed drinks, do expect wine and and beer along with some bottled mixes.

McDavid reopened a rehabbed Down Home Diner last fall, giving up some seating in return for a larger kitchen and a take-out counter. The take-out business has been growing, though not as fast as McDavid would like. Although much of what he sells at the counter is for bringing back home, he also does a lunch business for those who would prefer to eat in center court (or bring back to the office). Among the items added are cheese steaks, which he has cut by Charles Giunta of Giunta's Prime Shop from top round.

Much of what Jack buys comes from market vendors. You can frequently see him chatting his produce suppliers, Vinnie and Jimmy Iovine. He's also been buying some meat from L. Halteman. And he's used Giunta's brother Martin for sausage since he opened the original Down Home Diner where Amy's Kitchen and La Cucina now stand.
Posted by Bob Libkind at 12:01 PM No comments:

If it's from California, Arizona or Northern Mexico it's expensive.

Any produce shopper would have difficulty not noticing high prices of fruits and veggies from California and the Southwest.

Lettuce in particular has been hard-hit. Three weeks ago I paid $1 for a head at Iovine Brothers Produce. Today it was $3.99. A trade publication, The Produce News, said production "continues to be hampered" by weather problems": cold, wet and rainy weather in December  combined with more rain and cold temperatures over the past several weeks. Other lettuces and vegetables grown in the area are similarly afflicted.

The price pressure extended to South America: seedless green and black grapes which last week sold for $1.99/pound are now $2.49 and $2.99. Limes, from Mexico, are 99 cents apiece.

Some California crops are only minimally affected by the weather, including strawberries and oranges, though Florida production is more trouble-free and less pricey.
Posted by Bob Libkind at 11:44 AM No comments:

We're still a few weeks away from ramps, but another sign of spring appeared at one of the fish markets this week. Golden Fish was selling Spanish mackerel for $3.99/pound (the same price as sardines). Odds are they were from North Carolina or thereabout. When Boston mackerel show up, then I'll really know it's spring.
Posted by Bob Libkind at 11:20 AM No comments:

Valentine To The Market

An event that's been among the missing for 15 years was renewed Saturday night, the Valentine to the Market gala. About 400 guests attended the festivities, which raised cash for the Reading Terminal Market Preservation Fund.

Tasty tidbits were supplied by many of the market's merchants. Martin's Quality Meats & Sausage doled out juicy portions from a whole roast pig. Tommy DiNic's offered pulled pork with an exceptionally garlicky broccoli rabe. Mini-reubens could be had at Hershel's East Side Deli.

One of my fav offerings came from Iovine Brothers Produce, which put together a beautiful colorful display of produce-based treats. Chef Bobby Fisher, who will handle the kitchen duties when the Iovines reopen the Beer Garden as Molly Molloy's, had a hit with his almond gazpacho; he also made a fruit terrine by gelatinizing prosecco, the slightly sweet bubbly from Italy.

At the pre-party, Reading Terminal Market General Manager Paul Steinke announced that the new multi-purpose room to be built near center court, will be named after Rick Nichols, who is retiring from his columnist duties at the Philadelphia Inquirer.
Posted by Bob Libkind at 11:46 AM No comments: