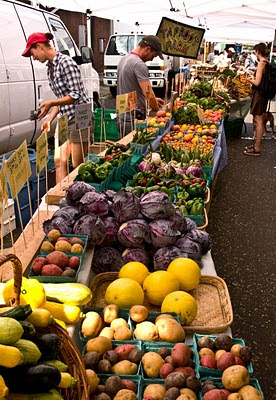 Summer in Swing
at South Street

Taproot Farm (photo left), Beechwood Orchard (below) and Livengood's offered just about anything you'd want, from tomatoes to tree fruit to root veggies.

Hakurei turnips are an early variety, and a reminder that summer doesn't last forever. Taproot was selling bunches for $2 apiece of these small, white veggies. Small red beets were the same price. Taproot's field tomatoes were $5/quart, while Sungolds were $4/pint, mixed color and size tomatoes $6/quart.

Over at Earl Livengood's I picked up a pint of blackberries ($3.95 and both Brandywine ($4.50/pound) and red cherry tomatoes ($2.50 for a half-pint). Earl's corn was four ears for $2.50, and both yellow and green stringbeans were $3.95/quart (about a pound). Next week, expect Sam Consylman to sell his Raritan Rose peaches at Earl's stall. 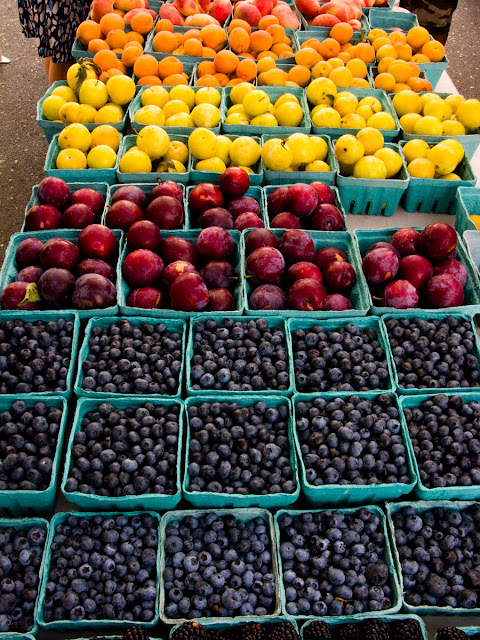 See yesterday's Headhouse post for the Beechwood Orchard details. The baker at South Street, as always, was Big Sky.
Posted by Bob Libkind at 4:37 PM 1 comment: 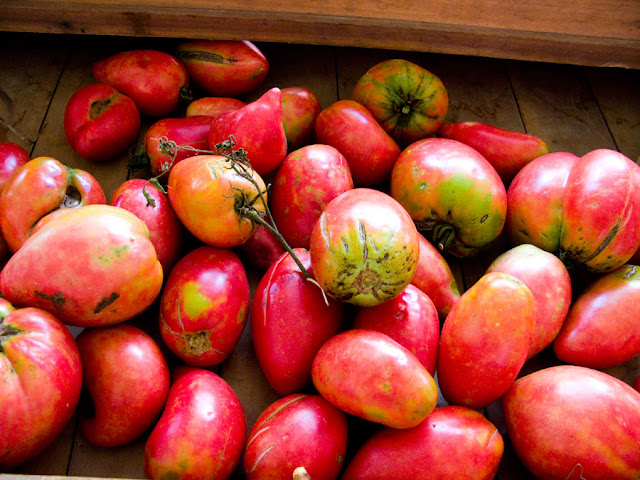 I thought the only food item for which Sheboygan, Wisconsin could claim fame was bratwurst. Seems they've got some tomatoes, too. Blackbird Heritage Farms featured them for $5/pound at today's Headhouse Square Farmers Market. At that price, however, too expensive for sauce making. According to Blackbird these large paste tomatos were brought to Sheboygan by Lithuanian immigrants. 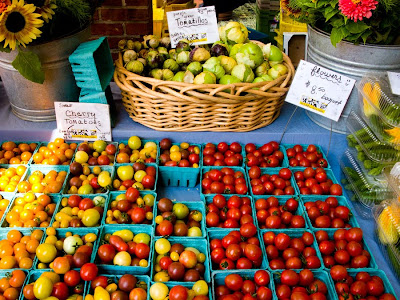 The pepper season has begun in earnest, too. Blooming Glen had sweet frryers for $3.50/pound. At Buzby's the peppers were priced per fruit: cubans 2/$1, green bells 2/$1.50. Tom Culton's sweet heirloom peppers were $4/pound. Celery has also made its appearance, $2.50 for each thin but incredibly fresh bunch at Blooming Glen. Corn, of course, could be obtained at Buzby, 75-cents near or $6/dozen. Their musk melons were $3.50 apiece. Culton also offered Laratte fingerling potatoes at $5/pound, haricot vert (string beans) at $5, and tiny Italian artichokes for $7. Savoie Farm had a couple varieties of potatoes at varying prices. Limas in the pod were $2.50 at Queen's Farm. 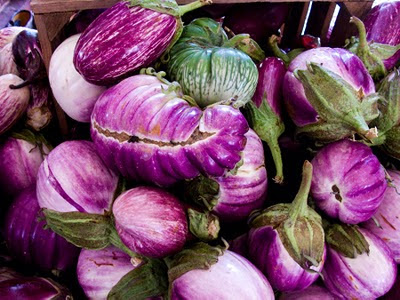 And of course there is a profusion of eggplant. Culton's heirloom varieities, pictured here, are $3.50/pound. Most of Blooming Glen's varieties (Italian, Asian, pink) were $2/pound, but Rosa Biancas were selling for $3.50. Buzby's deep purple variety was $1.50 per fruit, which probably weighed in just shy of a pound.

Over at Three Springs Fruit Farm, peaches were $2.49;pound, apricots $4.50/pint, donut peaches $5/pint. Their blueberries and blackberries were $4 a half-pint, raspberries $5. They and Beechwood Orchards had Lodi apples (the latter also had Jersey Macs); Three Springs' pples were $1.99/pound, Beechwood's $2.50. 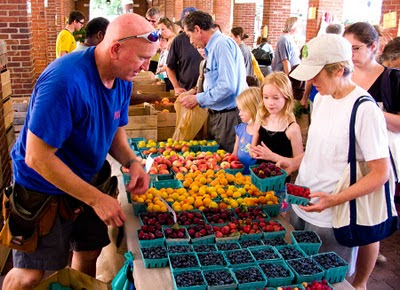 Beechwood's Dave Garretson (left) had the better deals on some of the fruit, tthough peaches were essentially the same at $2.50/pound with nectarines the same price. Plums (two or three varieties), donut peaches and apricots were all $3.50/pint or $6/quart, blueberries $4.50 for a full pint, blackberries $4, raspberries $4 a half-pint. Margarum's blueberries were even cheaper, $3.50/pint.
Posted by Bob Libkind at 2:56 PM No comments: 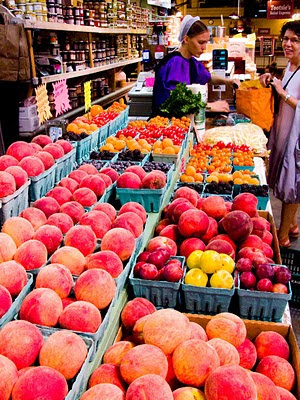 Getting My RTM Fix

I visited the Reading Terminal Market today for the first time in more than a month, arriving just after they opened the doors so I could avoid the crush later for the Ultimate Ice Cream Festival.

My first stop (photo at left) was to check out the status of summer produce at Kauffman's Lancaster County Produce, where proprietor Benuel complained about how hot it's been. (Why should he be different than anyone else?)

The mid-summer stone fruits were greatly in evidence: sugar and yellow plums for $2/pint, yellow peaches for $2.49/pound, pinks for $2.99, apricots $2.95/pint. Despite reading elsewhere the the blueberry season would be abbreviated this year, Ben had plenty, though pricey at $4.95/pint. Silver King corn was 50 cents an ear. Tomatos: beefstakes $3.49/pound, cherries $4.95/pint, Sun Golds $3/pint, heirlooms $4.99/pound 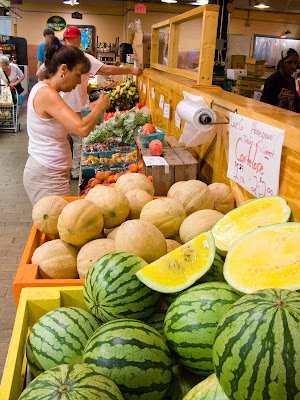 Since I'm just back from Norway I had to check the fish at John Hi, where dry scallops were quite high at $18.99/pound. Among the salmons, farm-raised Norwegian was about $10/pound while wild Alaskan King and Sockeye were $17.99 and $14.99, respectively. There was also New Zealand "wild" king, $15.99, but it's undoubtedly farm-raised despite the sign.
Posted by Bob Libkind at 12:28 PM No comments: 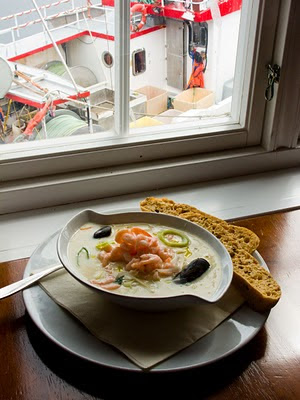 As noted in previous post, I'm back from Norway. The month-long trip was full of great vistas, people and food, like the fiskesuppe (right) I enjoyed at Sorvågen in the Lofoten Islands.

If you're interested, I've created a blog about the trip, including entries on the the foods I bought, cooked and ate during the visit, much of it spent north of the Arctic Circle.

I'm still catching up on adding blog entries from the last week of the trip, but there's plenty there now to read.

http://norwaysaga2010.blogspot.com
Posted by Bob Libkind at 12:47 PM No comments: 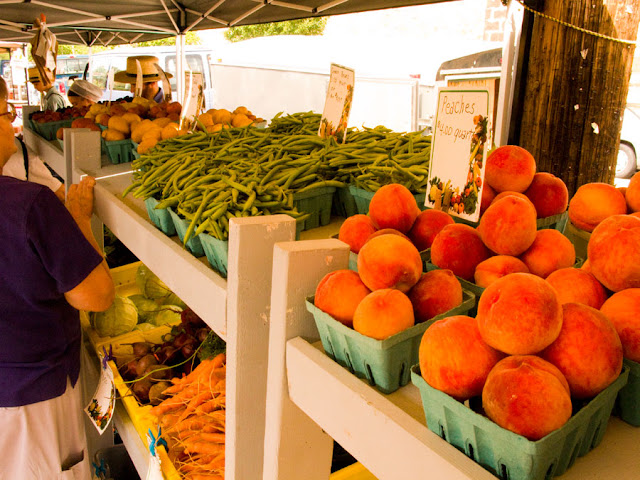 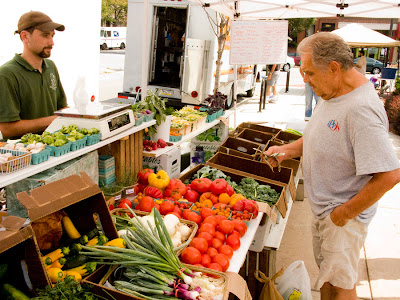 Like a siren, my neighborhood farmers' market called on our first day back in Philadelphia after the Norway sojourn. It took great restraint to limit my purchases to some blueberries from Bill Weller and carrots, Brandywine tomatoes, and endive from Earl Livengood's stall (left). Especially since corn is in season. But that will wait until the weekend.

Sam Stolfus, as seen in photo, had plenty of stone fruit: apricots and peaches in addition to a full assortment of veggies. The produce vendors also offered musk melons, blackberries, a variety of lettuces, fresh onions, scallions, potatoes, a variety of string and pole beans.

Had I been in the mood for more pølse (see Norway blog) I would have indulged in the encased goodies provided by Renaissance Sausage, which started frequenting the Fairmount market after my mid-June departure to Scandinavi. Other vendors at Fairmount yesterday included Wild Flour Bakery and Country Meadow Meats.
Posted by Bob Libkind at 9:47 AM No comments: