Won't You Be My Melon-craving Baby? 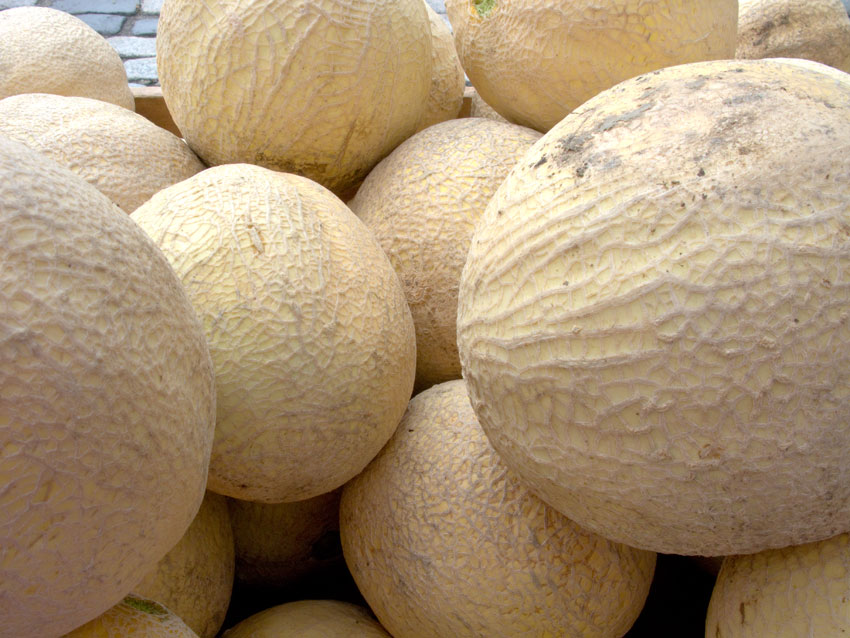 The same variety of local melon has been available on and off for the last week or so at Iovine's Urban Produce at the Reading Terminal market at half the price for a similar-sized melon. I purchased one of Iovine's a few days ago: good flavor, moderate sweetness with a sea-salt tang, all-in-all, an enjoyable melon to eat.

Although I'm not a stickler for washing produce, I always scrub melons in the sink: they're more apt than most other fruits to pick up pathogens in the soil. A quick, warm, slightly soapy scrub to the exterior before cutting does wonders. If you don't wash melons, any baddies on the surface will work their way inside when you slice it open.
Posted by Bob Libkind at 1:41 PM No comments: 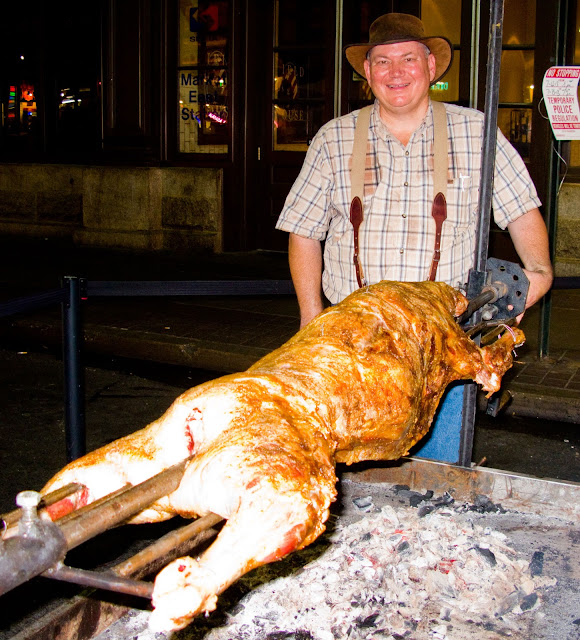 Shepherd Craig Rogers, proprietor of Border Springs Farm, works the spit with a 52-pound lamb roasting for today's Sidewalk Sizzle and Ice Cream Freeze at the Reading Terminal Market. Although they started serving lamb tacos from previously cooked lamb about 10 a.m. today, Rogers didn't expect to be able to carve from this carcass until about 1:30 p.m., after cooking for about six hours.
Posted by Bob Libkind at 11:48 AM No comments:


Time to shift to peach pie from cherry.

With the sour cherry season essentially over (you might find a few quarts this weekend if you're lucky) peaches have taken over the fresh produce stalls at area farmers markets. Local peaches can even be found at Iovine's Urban Produce at the Reading Terminal Market, where Jersey peaches were selling for 99 cents a pound recently.

Ben Wenk of Three Springs Fruit Farm had them at his family's stall last Sunday at Headhouse Square, and all the other orchardists are likely to show off their whites and yellows this weekend. Nectarines won't be far behind, and apricots have already made their appearance. Plums of various persuasions (and perhaps even early apples, like Lodi) will show up in the stalls over the next few weeks.

Posted by Bob Libkind at 3:30 PM No comments: 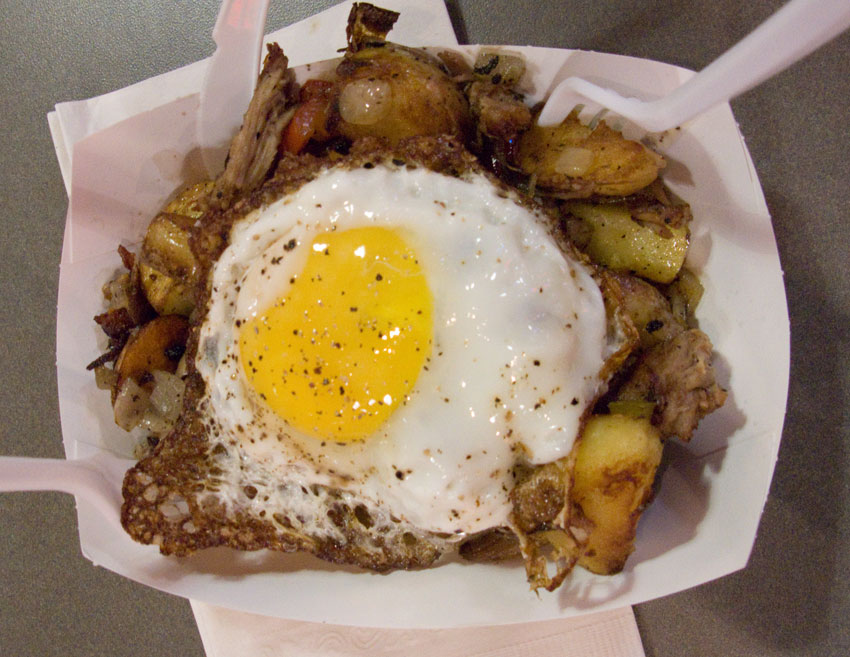 Why settle for plain hash, when you can get lamb thrown into the bargain. The lamb hash, oniony with a touch of pepper heat and topped with a fried egg, is a popular breakfast item at the Border Springs Lamb Farm stall at the Reading Terminal Market. An even bigger seller is their lamb taco for lunch; they'll be serving it from a whole animal they'll roast at tomorrow's Sidewalk Sizzle and Ice Cream Freeze along Filbert Street.
Posted by Bob Libkind at 3:17 PM No comments:


From The Belly of Paris, by Émile Zola:


The cherries, ranged one by one, resembled the short lips of smiling Chinese girls; the Montmorencies suggested the dumpy mouths of buxom women; the English ones were longer and graver-looking; the common black ones seemed as though they had been bruised and crushed by kisses; while the white- hearts, with their patches of rose and white, appeared to smile with mingled merriment and vexation.

In the meantime, I've gone through many half pints of black raspberries making one of my favorite ice creams. Here's how it's done:

Take two half-pints of black raspberries (about 3 to 4 cups) and place them in a bowl with half a cup of granulated white sugar. Toss and crush, then let them sit for two hours of so.

After two hours, place berries and rendered juice in fine mesh strainer over a bowl, and press with a stiff spatula or other device of your choosing to render out the rest of the juice, leaving behind (and discarding) the seeds and the pulp that clings to it and just won't go through the mesh. Transfer juice to small pot and reduce slightly.

Meanwhile, heat a cup of cream (pasteurized, but not ultra-pasteurized: you can find it Lancaster County Dairy at the Reading Terminal or Whole Foods; Trader Joe's might have it, also) gently with a cup of sugar, stirring until sugar is dissolved. If you have it, stir in a couple tablespoons of plain -- not high fructose -- corn syrup. (I use Karo Light, as opposed to Karo Lite, which I do not recommend.) Combine the cream/sugar mix and raspberry juice, stirring in a tablespoon of vodka. If you have it, use a raspberry eau die vie (Framboise) instead. The addition of the corn syrup helps prevent the finished ice cream from forming large ice crystals. The alcohol lowers the freezing point of the mix, helping keep it scoopable.

Let the mix sit overnight in the refrigerator. Then prepare in your ice cream maker according to the manufacturer's directions. When done, pack into containers, lightly press plastic wrap into the ice cream (it will be pretty soft), cover and let ripen in the freezer for four hours before serving.

For a real treat, mix in a half- to three-quarters cup of mini chocolate chips or the smallest chunks you can find during the last few minutes in the ice cream machine.

At Headhouse and other farmers markets, black raspberries have been selling for about $4.50 a half-pint. Cherries, sweet or sour, are anywhere from $7 to $9 a quart. Blueberries, which have also started to appear, sell for $3 a half-pint or $5 a pint, making them a berry bargain: they'll be my next ice cream or sorbet, and they make the best cobbler. Prices are about the same at Kauffman's Lancaster County Produce at the Reading Terminal Market though, as usual, L. Halteman Family undersells just about everyone: black raspberries were $3.99 a half-pint there last week, cherries $6.49/quart. I used their black raspberries for my first batch of ice cream, and they were superb.

Posted by Bob Libkind at 5:43 PM No comments:

From the last two Sundays at Headhouse: 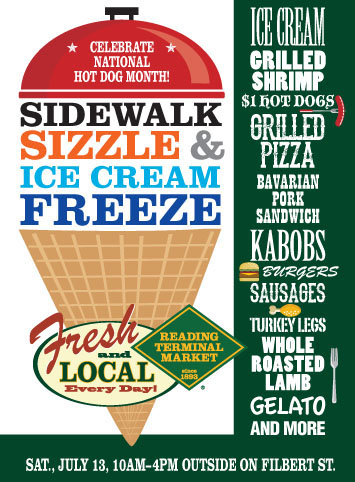 For the past few years the Reading Terminal Market has devoted a mid-July Saturday to an ice cream festival. Before that the market sponsored a Sidewalk Sizzle with meats on grills.This year they've been combined into a -- surprise -- "Sidewalk Sizzle and Ice Cream Freeze", to be held July 13 on Filbert Street, a.k.a. Harry Ochs Way.

The annual Pennsylvania Dutch Festival is scheduled for Aug. 8-10, the Harvest Festival Oct. 12 and Scrapple Fest Nov. 12.
Posted by Bob Libkind at 5:15 PM No comments: