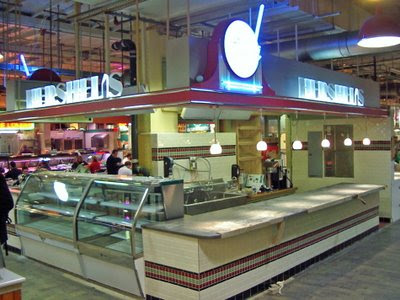 Hershel's East Side Deli is nearing completion at the RTM, as seen in this photo.

They hope to be in business in time for the weekend of February 10. The menu will be pretty basic. Corned beef, pastrami, brisket, turkey, chopped liver, chicken salad, tuna salad, egg salad and whitefish salads in various sandwich and platter permutations, hot dogs (Hebrew National; I wish they would have used a more interesting kosher style dog, like Best Provisions or Sabrett); soups; latkes, kugel, and kasha varnishke (buckwheat groats and bow tie pasta); and knishes. They also will serve breakfast, including challah French toast. Lox will also be available. On the beverage front, egg creams and various Dr. Brown's sodas, including Cel-Ray.

I'm going to have to try lunch at one of the fish vendors. Golden offers oysters and clams on the halfshell, at $5.50 and $3.50 for a half dozen, respectively, served with lemon and sauce (that's cocktail sauce; no mignonette sauce, alas). At least for the oysters that's just about the best price in town, save the happy hour oysters at Sansom Street. Another market purveyor, Coastal Cave has oysters at $6.95 and clams at $3.75 per half dozen.

This seems to be the time of the year when fish is at its most expensive. Prices for halibut ranged as high as $17, and cod fillets were nearly $9. The best deals were in whole fish, mackeral ($1.99-$2.49) and spanish mackeral ($2.99); buck shad could also be had for $2.99 if you like to deal with its intricate bone structure. Golden is still selling whole sardines (herring) at $2.99/pound. The least expensive mild white fillets from wild-caught fish were for scrod at $6.99 at John Yi's.

Super Bowl Sunday is coming up, and one traditional food serve to is guacamole. Today at Iovine Brothers Hass avocadoes were selling at the very low price of two for a buck; however, they were drop dead ripe and need to be prepared and eaten today or tomorrow at the latest. If they are still offering avocados at this price Friday or Saturday, and they haven't gone over the hill into battery acid territory, buy them.

Signs of that California freeze are clear in the citrus section: three smallish navel oranges for $1, lemons also three for a buck. Clementines, no matter what their source, are up to $7.99/box. Best buy in citrus are Florida tangelos and temples; the latter were posted at 25-cents apiece today. The one-pound clamshell packed Florida strawberries, $1.99, smelled good. Green seedless grapes from Chile, 99-cents; black seedless $3.49. Red and green bagged peppers, $1. The South American peach crop is in; I've never found them to my liking for in-hand eating, but I suppose they'd be fine cooked or baked in some fashion.

Jimmy Iovine says the brothers are contemplating moving all their prep and packaging operations to the RTM's basement. That would open up a fair amount of additional spelling space they would devote to a wider range of items, expanding Iovine's into more of a grocery store, according to Jimmy.

Seems to me this would build on the success of Sunday openings in making the RTM more attractive for residents of Center City and nearby areas who actually shop there. Such an Iovine's expansion no doubt will help them compete when Whole Foods eventually moves closer to the RTM when it opens the 16th & Vine location.
Posted by Bob Libkind at 2:22 PM No comments:

Email ThisBlogThis!Share to TwitterShare to FacebookShare to Pinterest
Some musical chairs in vendor locations noticed this weekend. Terralynn has abandoned the center court cart. Instead, Terralyn's soaps and skin care products will be sold in the stand where Young's Flowers has been recently. That stand actually had been Spataro's prior to the RTM's mid-1980s renovation and you can still see the Spataro's "Drink Buttermilk" signs atop the stand. Young's moves to a cart in center court opposite Mezze.

Right across from the Young's cart work is proceeding apace for Hershel's Deli. Counter tops were due to be delivered today (Monday, Jan. 22), and the store could be open in two or three weeks.

Earl Livengood was selling potatoes, turnips, rutabagas, winter squashes, carrots, kale, and the last of his leeks and scallions Saturday. Earl will make occasional appearances on Saturdays when has produce to sell, but otherwise he won't be making regular appearances until early spring when the first green things start to pop out of the ground. For the time being, it's almost exclusively root vegetables.

Rather than roots, the RTM goes to the heart of the matter three days earlier, on Valentine's Day, Feb. 14. That's when Judge Jeffrey P. Mineheart will marry six couples in Center Court at 11 a.m.

Valentine's Day brings to mind chocolate, of course. The Pennsylvania General Store has been selling John & Kira's chocolates for six or seven months, but you wouldn't know it unless you asked. Now proprietor Mike Holahan has put up a sign to let you know about them.

Over at Fair Food Farmstand you can get white spelt hot dog buns to go with your uncured frankfurters.

Even though spring is still two months away, it's been imported from Florida: shad. John Yi is selling whole buck shad for $2.99; they are also packaging shad row and red snapper filets together in a single package. Mackeral is available as either whole fish ($1.99) or filet ($2.99). Wild striped bass (a.k.a. rockfish) is selling for $4.99 whole.
Posted by Bob Libkind at 2:20 PM No comments: