Bill Beck has doubled the availability of beignets at Beck's Cajun Café at the Reading Terminal Market. They're now available (while they last) on Mondays, Wednesdays, Fridays and Sundays.

Until about a month ago they could only be had on Wednesdays and Sundays.

The beignets are cooked to order and served very hot, topped with confectioners sugar. If you're ordering them to take to seating elsewhere in the market, don't let Beck's counter server put a lid on top; they're so hot the escaping steam will transform these delights into a heavy, soggy mess. Besides, these are best consumed hot out of the fryer, with a cup of coffee.

They are best ordered as early as possible in the morning. Beck's Reading Terminal Market outpost has only one deep fryer, and by lunchtime it's being used for fried seafood. 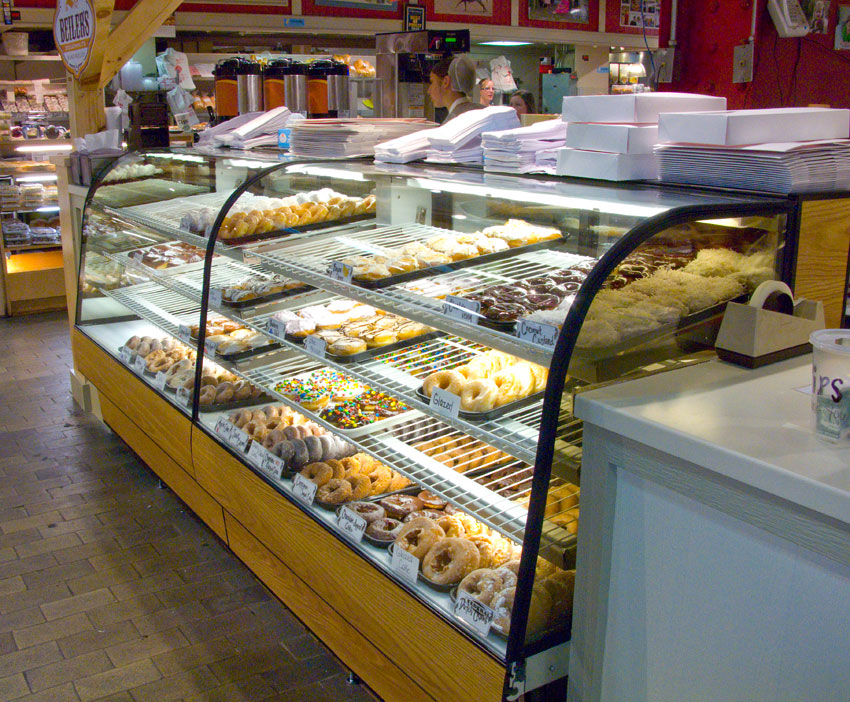 Bieler's Doughnuts & Salads opened Friday in the spot formerly known as AJ's Pickle Patch at the Reading Terminal Market. Proprietor Alvin Bieler, who also owns the eponymous bakery across the market's "11th Avenue" aisle, kept all of his AJ's products except packaged goods, so you can still get barrel pickles, sauerkraut and salads.
Posted by Bob Libkind at 10:09 AM 2 comments:

My visit to the Philly Farm and Food Fest Sunday resulted not only in renewing acquaintances with farmers and fellow foodies not seen since the seasonal farmers' markets closed last fall, but a big score in ramps.

Wild foods gatherer David Siller posted himself and his collection of ramps, fiddleheads and other early spring edibles with Cobblestone Krautery at the Convention Center conclave of hungry people. I couldn't resist leaving without buying two pounds of ramps at the bargain price of $14/pound. Considering that a single bunch weighing maybe two ounce goes for $3.99 at Iovine Brothers Produce at the Reading Terminal Market, that was a savings of about 60 percent! I also picked up a considerably lesser quantity of fiddleheads.

Of course, David's ramps had a fair amount of soil still clinging to them, but it still took me only about 10 minutes to separate the roots from the bulbs and the bulbs from the leaves, then another 10 minutes to go through the leaves to discard about 20 percent because they were a bit too fibrous and rinse off the bulbs.

The bulbs are now sitting in a glass jar in the fridge in my slightly sweet pickling liquid -- they should be ready to accompany some grilled meat or fish by next weekend, and they'll last at least a month.

The leaves required a bit further cleaning to dislodge larger particles of dirt. I set aside about a dozen leaves which will go into pilaf tonight. But yesterday, after a triple wash through my salad spinner, I concocted some ramp pesto.

A perusal of recipes on the web found a number of recommendations to blanch the leaves first to inhibit browning. After shocking the blanched ramp leaves in a bowl of iced water, I laid them in a kitchen towel, pressed as much excess water out as I could, then repeated in paper toweling. Once dry, I roughly chopped them.

After pulsing about a cup and a half of grated parmesan and about a cup of chopped walnuts with a little table salt and a teaspoon or so of dried oregano in the food processor, I added the leaves and pulsed a bit more. Then I drizzled in extra virgin olive oil until I reached my desired consistency, stopping the process once to scrape down the sides of the bowl. I didn't measure but I'd guess the pesto took about a cup of oil. (I would have used less oil if I wanted a spread rather than a pasta sauce.)

I served some over penne rigate last night and froze the rest for future use.

The resulting pesto was quite herbal rather than oniony. Had I included half a dozen or so chopped ramp bulbs it would have had more kick. But it was delicious as prepared.

Posted by Bob Libkind at 4:41 PM No comments:

Alvin Bieler says he'll be offering 40 varieties of doughnuts when AJ's Pickle Patch reopens -- perhaps as early as next weekend -- As Bieler's Doughnuts.

By yesterday some of the equipment had been rolled in, but there are still cases to install and plenty of finishing work to accomplish.

Bieler said the variety will be achieved through a variety of toppings and fillings.

He also said he's learned some of the finer points of doughnut making recently from a master of the trade, and says his product won't quickly go stale when it's stored properly in a sealed container.

As previously reported, the stall will continue to sell prepared salads and pickles when it reopens under the new name.
Posted by Bob Libkind at 10:22 AM No comments:

Although gone for 30 years from the Reading Terminal Market, Joseph W. Srode Jr. was remembered as the owner of one of the market's original stalls. Strode, who died April 8 at age 83, was the third generation partner in Strode's Sausage & Scrapple, the West Chester family business that started in 1875

When the Strodes first started selling their products at the Reading Terminal in 1893, they were one of the few suppliers of pork products in the Philadelphia region and as a result had one of the earliest USDA inspection numbers — 71. Much of the popularity of scrapple in the Philadelphia region beyond the Pennsylvania German community can be attributed to the Strodes. They sold the West Chester business to the Daniel Weaver Company of Lebanon, which in turn was acquired by Godshall Quality Meats of Telford. (Not the same Godshall's at the RTM poultry vendor.)
Posted by Bob Libkind at 10:13 AM No comments: 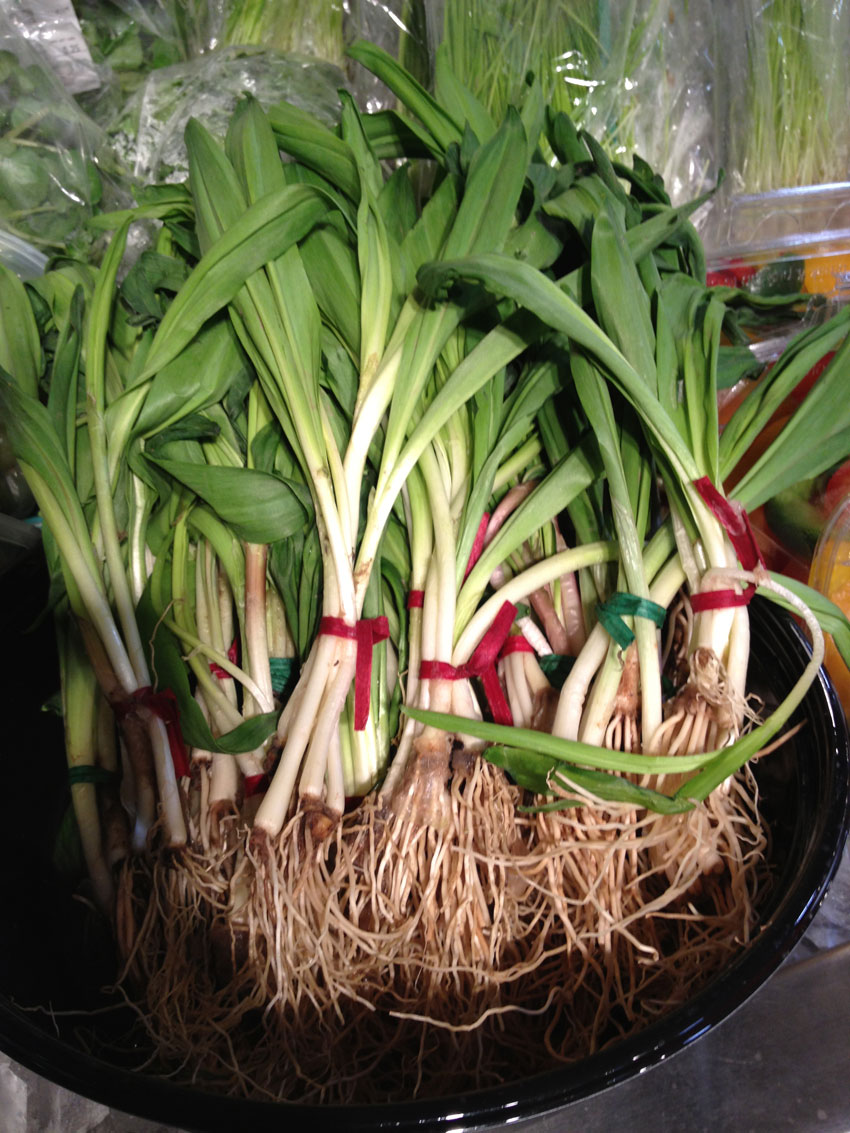 About five thin stalks of ramps will set you back $3.99. This sure sign of spring was prominently displayed in front of the checkout lines at Iovine Brothers Produce, Reading Terminal Market.