Sumer Is Icumen In

If you're into English medieval music, you'll recognize the title Sumer Is Icumen In as a little ditty probably dating to about 1260. You might even recall Alan Hale's Little John whistling it in the 1938 Errol Flynn classic Robin Hood.

Translated from Middle English it pretty much means what you think: Summer Has Arrived. Nowhere can that be seen more clearly that at local markets.

The produce of spring -- strawberries, asparagus -- are still around but fading fast. Instead, cherries made their first local appearance this past week, with more to come over the next few weeks. Jersey blueberries will be plentiful soon, and it won't be long until we see apricots, raspberries and other summer sweet fruits.

Here's a sampling of what I've found recently:

Steve Bowes, the organic farmer who occupied space in the piano court for the past few years, has left the Reading Terminal Market. Instead he's concentrating on wholesaling to local restaurants and his Community Supported Agriculture (CSA) program. Among his wholesale customers, and headquarters for his CSA in Philadelphia, is Russet Restaurant on Spruce Street.

Bowes started out at the market three years ago when it briefly, and unsuccessfully, partnered with Farm to City to operate a traditional farmers' market across 12th Street. After that effort failed, Bowes elected to sell directly inside the market, using day tables set up in the piano court opposite Metropolitan Bakery. Bowes filled a gap in the market's offerings when Livengood Family left center court.

Paul Steinke, general manager of the Reading Terminal Market, said there's no active search for a replacement. Instead, market shoppers will have to rely on local produce sold by eisting produce vendors:

The Livengood Family Farm won't be selling their produce within Philadelphia's city limits this season.

The Livengoods -- Earl and Joyce and their son Dwain -- were mainstays at Reading Terminal Market's Center Court until 2010. At that time they continued to sell their certified organic produce at the South & Passyunk, Fairmount and Clark Park farmers markets until this year. Now they're limiting their presence to the Bala Cynwyd and East Goshen markets on Thursdays, and the Saturday markets at Artisans Exchange in West Chester, Upper Merion, and Bryn Mawr.

Dwain Livengood hopes to continue at the Saturday Clark Park winter after Thanksgiving.

The South & Passyunk market, by the way, has switched from Tuesdays to Saturdays. It's the oldest of the current farmers markets in the city. 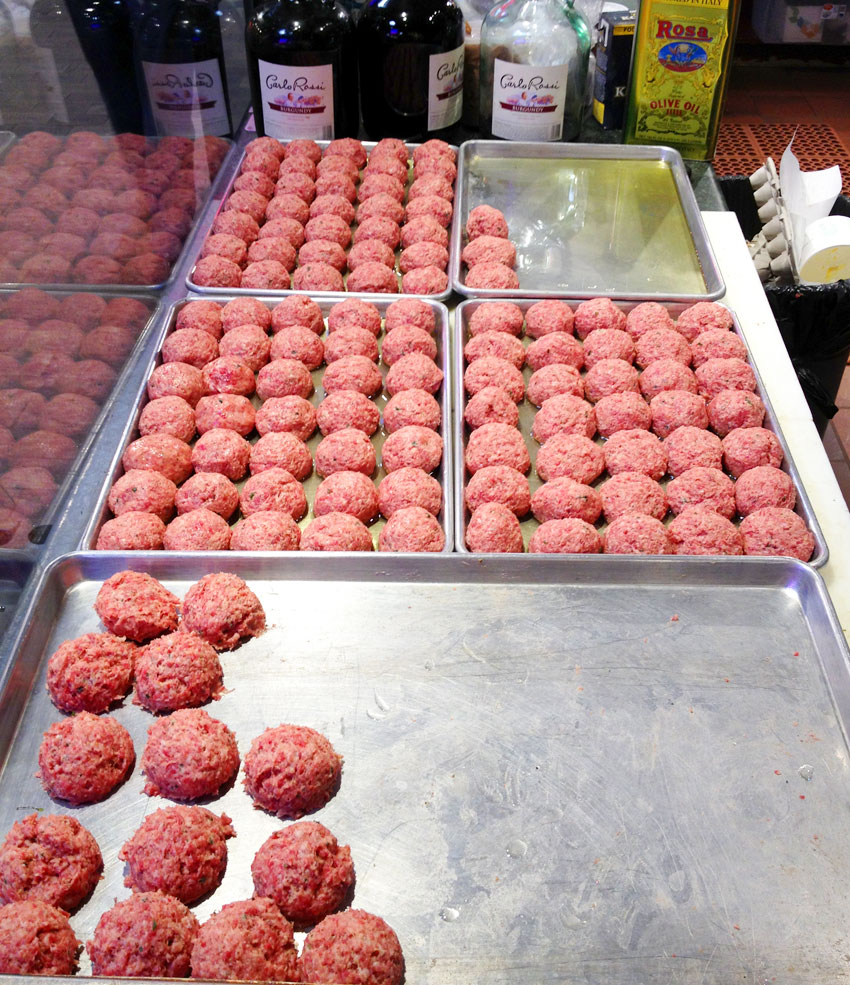 The trays of meatballs are almost ready for the oven at Tommy DiNic's at the Reading Terminal Market. DiNic's makes them from a lean cut of beef round augmented with just the right amount of of fatty pork trimmings.
Posted by Bob Libkind at 3:21 PM 1 comment:

Those riblets from Border Springs Lamb Farm I wrote about two weeks ago were every bit as good as hoped. Meaty but still enough tasty fat. They were among the hits of the Memorial Day block party. I simmered them in plenty of salted water for about half an hour then drained and stuck them in the 'fridge until the next day when I charred them over the fire, constantly basting with a glaze and turning until nicely browned but not burned. The glaze was a cup of orange marmalade, half a cup of Dijoin mustard, two tablespoons of red wine vinegar (apple cider would work, but I wouldn't use an expensive balsamic or sherry vinegar on this), and two teaspoons of whole cumin seeds which I then ground after toasting.

Border Springs now has its kitchen up and (mostly) running. I haven't tried any of the lunch dishes, and whether or not they serve breakfast was still a bit hit-and-miss as of yesterday. But the taste of biscuit with gravy and sausage Aaron offered last Saturday was superb, almost like a cream of lamb sausage soup. The only off-note was a too heavy hand with the black pepper, which Aaron said he'd be lightening up. This version of Rich Man's Gravy needs black pepper, it was just a tad too much when I tasted it.

At least one of the market's other butchers has already responded to Border Springs by lowering its price on shoulder chops. Martin's, which until recently charged $6.99/pound, was selling them for $4.99 last weekend, vs. $7.50-$8 at Border Springs, depending on the particular section of shoulder used. Martin's Brother Charles Giunta (Giunta's Prime Shop) was selling them for $6.99, while BJ's Warehouse had them for $5.99. Martin also dropped his price on ground lamb. Border Springs' loin chops are priced at $15, about two bucks more a pound than at Martin's and Giunta's.

Posted by Bob Libkind at 2:46 PM No comments: