Thirty Years of Amish at RTM

The Amish haven't always been at the Reading Terminal Market, though it might seem that way. They've certainly been there since I started shopping there in 1982. In fact, they only arrived two years prior.

How the Amish set up shop underneath the Reading Railroad's hub was retold by Steve Algott at today's market event commemorating the 30th anniversary of Amish merchants at the Reading Terminal Market. Algott was assigned the task of managing the property when the Reading Company's real estate arm reasserted control with the ending of the master lease held by Center City landlord Sam Rappaport.

Algott found Amish tenants to occupy the northwest corner of the market, where most of the evicted tenants were located, at Booth's Corner Market, a conglomeration of Amish merchants in Chester County that's been around for 80 years. On the spot he met with Sam Fisher who agreed to bring his and other businesses to the Reading Terminal on a handshake deal.

As Algott tells the story, he immediately told Fisher he'd return to the city and draw up the lease papers. To which Fisher responded Algott would have to rely on the handshake: the Amish wouldn't sign leases. Algott went back to his Reading Company superiors with his "good news" (I've got tenants) and "bad news" (they won't sign a lease). But the Reading Company took the chance, and the Amish came, bringing their familes to start businesses in downtown Philadelphia. The rest, as they say, is history.

In addition to Algott, other speakers at the noontime ceremony in the seating area behind Miller's Twist's pretzel stand included David Esh, one of the first Amish tenants and operator of Hatfield Deli. Among the original Pennsylvania Dutch who remain are Dienner's Bar-B-Q, Sweet as Fudge Candy Shoppe (formerly Fisher's), and Esh.

Also in attendance were Steve Park, the first general manager of the RTM for the Reading Company, and his successor, David K. O'Neill, under whose tenure the market attracted scores of additional vendors and undertook the modernization program concurrent with the building of the Pennsylvania Convention Center.

To O'Neil, the presence of the Amish reflect one of the keys to a market's success: a gathering place where people can come together.
Posted by Bob Libkind at 3:51 PM No comments:

You have have noticed some new flavors at Bassetts Ice Cream stall in the Reading Terminal Market, including Mango, Green Tea and Macadamia Nut.

Those flavors, which sell respectably in Philadelphia, are big hits in China, where Bassetts has sold its ice cream for the past two years. Michael Strange, proprietor of Bassetts, says he's shipped hundreds of tons since starting in May 2008.

The 40-foot containers are trucked to Port Newark-Elizabeth on a regular basis for export from Bassett's contract plant near Johnstown, Galliker Dairy Co. The ice cream is distributed in the Beijing area.

Strange said he had had inquiries in the past to sell abroad, but the deals always fell apart. The Chinese deal, however, has taken off like hotcakes, er, ice cream on a summer day
Posted by Bob Libkind at 3:43 PM No comments: 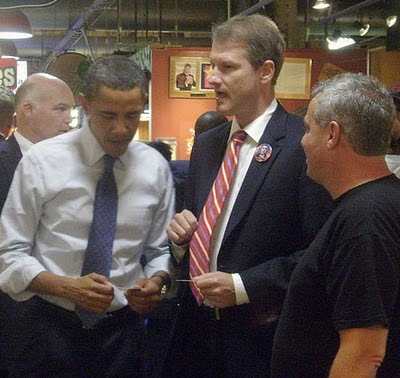 Posted by Bob Libkind at 4:23 PM No comments:

Elizabeth Halen, who's been blogging about baking and other food topics over at Foodaphilia, can't resist the urge to turn avocation to vocation. So she's bought the Reading Terminal Market outpost of Flying Monkey Patisserie.

Halen doesn't officially take over until Oct. 1, but she can frequently be found at the center court stall now. She plans to expand beyond the cupcakes, brownies and bar cookies in the current offerings. You might want to check out the recipe list on her blog to get an idea of the possibilities.
Posted by Bob Libkind at 2:58 PM No comments: