Elizabeth Halen, the new proprietor of Flying Monkey Patisserie at the Reading Terminal Market, has been getting plenty of ink (and electronic coverage) with her Pumpple Cake, including Monday on the fourth hour of the Today Show. The combination of pumpkin cake and appie pie sells for $8 a slice (though one slice can serve three).

A bit more manageable are Elizabeth's pumpkin Whoopie pies. It's a simple treat: buttercream filling in a hamburger-sized pumpkin cake bun. The cake is gently spiced and the buttercream rich but not overwhelming. At $2.50 apiece, a delightful splurge. And a tad less caloric than Elizabeth's Pumple Cake or Elvis Cake (banana-flavored butter cake, chocolate chips, peanut butter buttercream).

I saw lots of chocolate Whoopie pies during my recent trip to Maine where they are as much a part of the culinary landscape as lobsters.
Posted by Bob Libkind at 3:36 PM No comments:

What were they thinking? 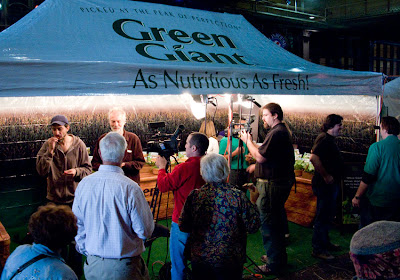 Go to the Reading Terminal Market's website and you'll find the market's logo proclaiming "Fresh & Local Every Day". The same phrase appears in many of the market's promotions and advertisements as it positions itself as the region's premier source of local foods.

So what was the market thinking allowing agro-industry giant General Mills to promote its Green Giant line of frozen produce at today's Harvest Festival? Green Giant even emblazoned its stall with the catchphrase "As Nutritious As Fresh!" (photo) directly across the hay-strewn asphalt of Harry Ochs Way (Filbert Street) from Iovine Brothers Produce's Harvest Festival display.

The RTM's general manager, Paul Steinke, was not available to provide an explanation. He was in Milan participating in this year's Terra Madre, the annual international event dedicated to local, fresh, sustainable artisinal foods sponsored by Slow Food International. That explanatory task was left to Sarah Levitsky, the RTM's marketing coordinator.

Basically, it was for the money. The Green Giant division approached the market looking for an opportunity to do an educational promotion extolling the nutritional value of its frozen vegetables. Although Levitsky didn't volunteer the dollar value she indicated that the fee helped underwrite the market's costs in staging the festival.

Now, I don't question the value and nutrition of frozen vegetables. Petite peas, for example, are a staple in my freezer. (BTW, canned petite peas were one of Green Giant's big hits in the early 20th century, when it was still the independent Minnesota Valley Canning Company based in LeSeur, Minnesota. The company was acquired by Pillsbury in 1979, which itself was gobbled up by General Mills in 2001.)

But if the market is going to promote itself as the year-round source of "Fresh & Local" foods, succumbing to General Mills' cash was regrettable. Especially so in light of the market's proposed acquisition of Farm to City, one of the region's major sponsors of farmers' markets.

One can't help but wonder what Fair Food, Iovine Brothers, O.K. Lee, L. Halteman Family, or Kauffman's Lancaster County Produce (all of which sell local produce) thought of the promotion. Even if they gave their assent, it just had to be grudgingly.
Posted by Bob Libkind at 1:40 PM No comments: 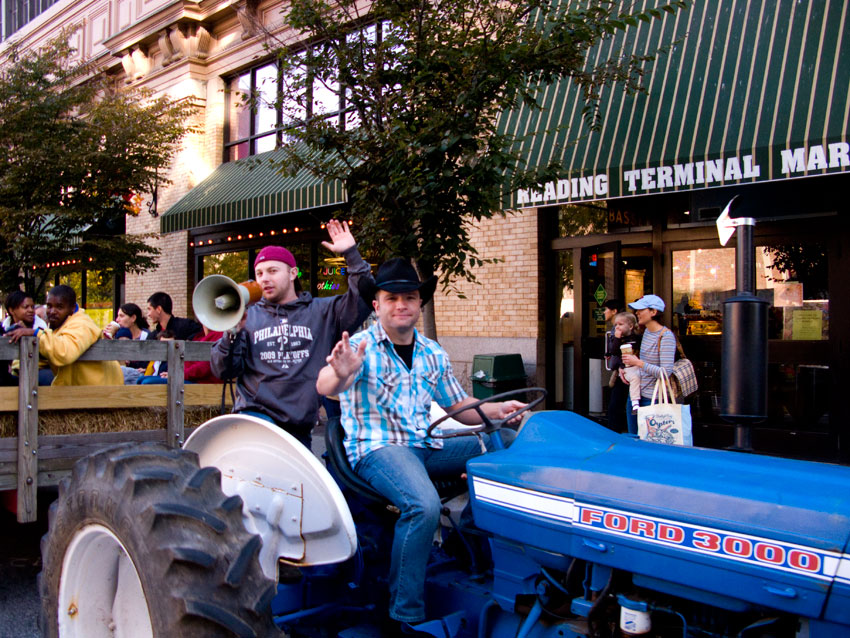 Harry Ochs Way, a.k.a. Filbert Street, was closed off to street traffic and spread with hay. At least half a dozen RTM merchants set up outdoor shop for the day. I sampled cinnamon doughnuts hot from the fryer featured at Bieler's stand. I left too early to get some meat off Jack McDavid's Down Home Diner portable barbeque truck. One of the funniest offerings was the "Harvest Platter" offered by one of the Chinese food vendors: skewered chicken, rice? Delicious, I'm sure, but not one of the first foods I conjure up when thinking "harvest" with hay at my feet.
Posted by Bob Libkind at 12:57 PM No comments: 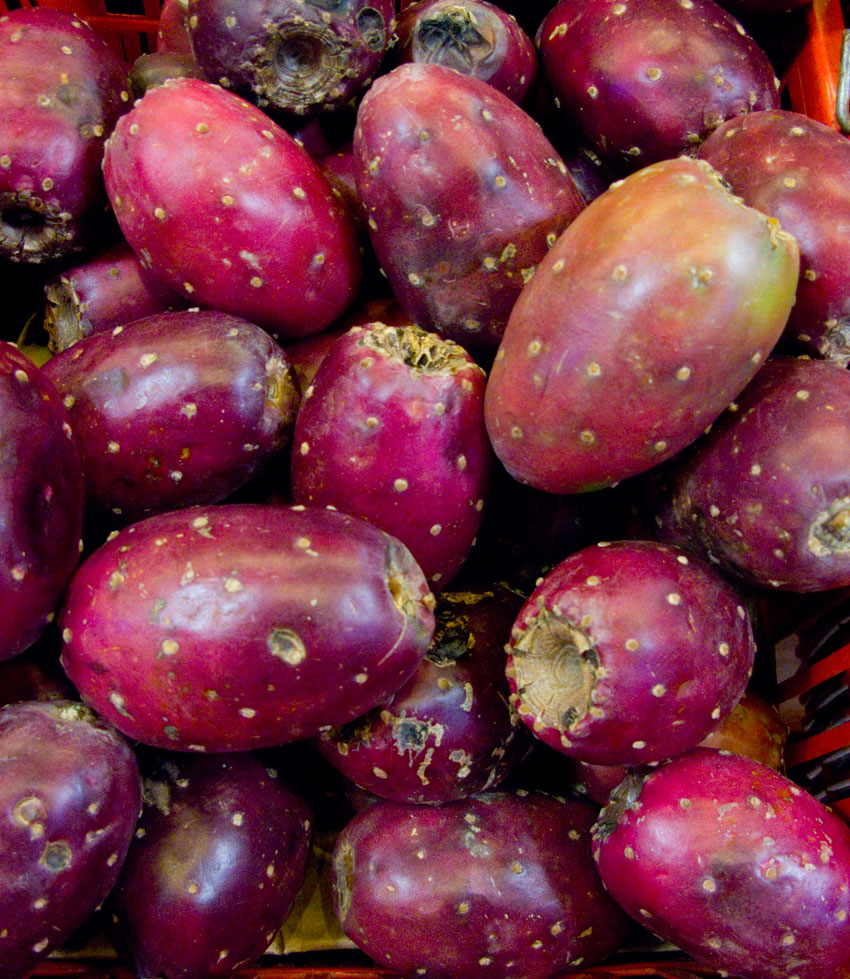 O.K. Lee had some gorgeous cactus pears today at a bargain two for a buck. I've used them for sorbet, and also in margaritas, though I'd imagine they would work in other cocktails, including mojitos. The color of the juice is intense, making any beverage made from it a great showpiece. Four fruits should yield about a cup of juice.

You can find an illustrated guide to peeling and prepping these beauties (not at all hard) here.

Quick thought for another use: make a sugar syrup with it and drizzle atop vanilla ice cream.
Posted by Bob Libkind at 12:38 PM No comments: 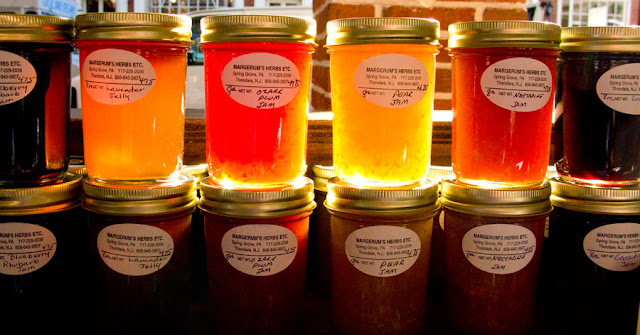 Nothing demarcates the seasons quite as much travelling afar and returning home.

After a sojourn to the rocky coast of Down East Maine for much of the first half of October, I returned to Philadelphia this past week. At both the Reading Terminal Market Friday and the Headhouse Square farmers' market today I was innundated by the foods (and colors, like those of Margerum's preserves at Headhouse) or fall produce. Herewith, some photos and thoughts.

Autumn is prime time for cruciferious vegetables, which get their name from a resemblance, somewhere in their visible anatomical structure, to a cross. Most of the cruciferous veggies we see in the markets are brassicas (the few that aren't brassicas include wasabi, horseradish, radishes, arugula and the various cresses). 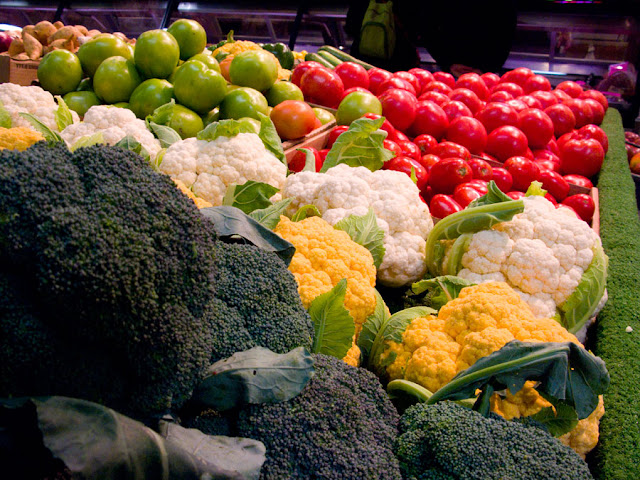 Broccoli and cauliflower, whatever the color, as well as the pointy romanesco, are all variations of brassica oleracea. These specimens were found at Benuel Kauffman's Lancaster County Produce at the Reading Terminal Market Friday. 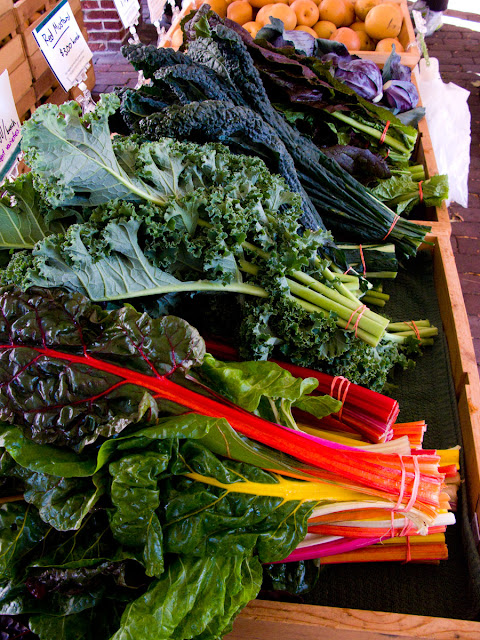 Kale and collards (though not the chard in the foreground) are also cruciferous veggies. These could be purchased today at the North Star stall at the Headhouse market. 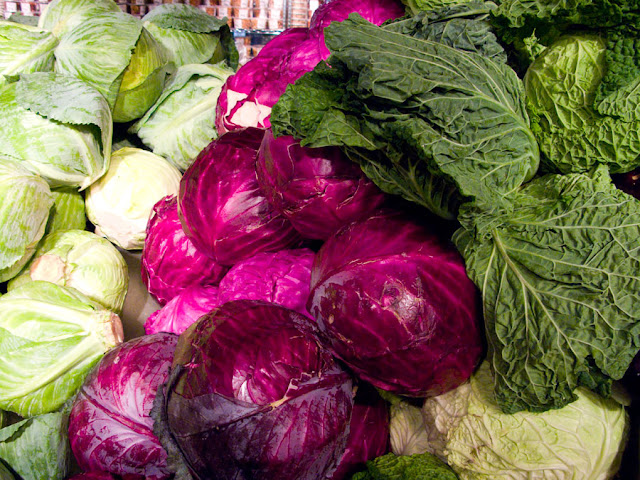 Cabbages galore at Iovine Brother's Produce Friday at the RTM. The plain green cabbage, at left, was selling for 50 cents a pound while the red and savoy were priced at 69 cents. All were from local farms in South Jersey.

Peppers Are Better In October 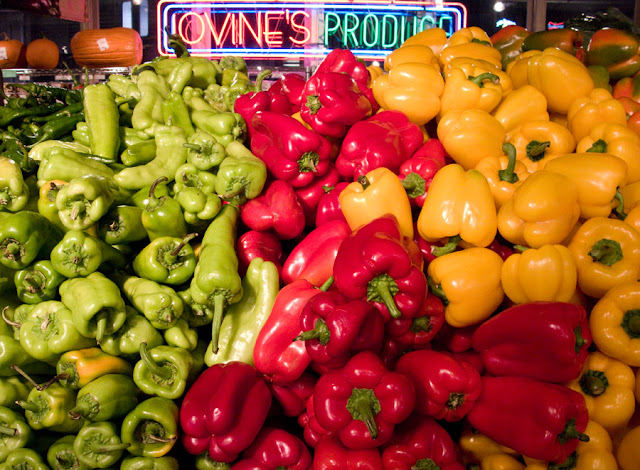 I think of peppers as a summer vegetable, even if they are, like tomatoes, technically fruits. Yet, the peppers I've tasted both in Maine and since returning are sweeter and more flavorful than those I sampled in August and September. Maybe it's those extra days in the sun.  The green frying peppers (left) and red varities pictured above at Iovine's all hail from South Jersey farms. 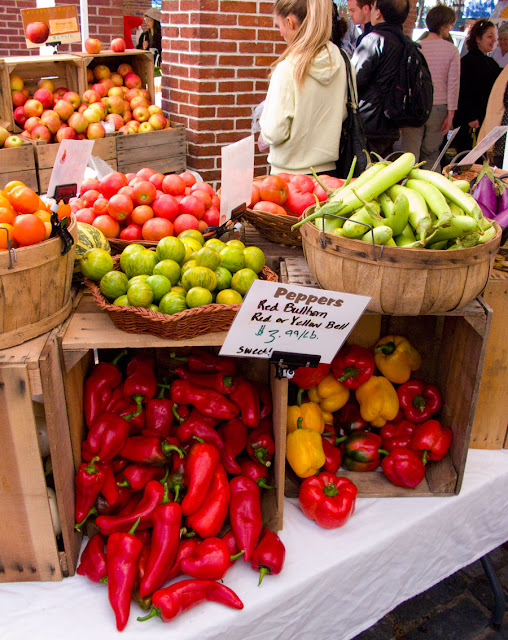 These peppers (as well as eggplants and tomatoes) filled the Three Springs Fruit Farm stall at Headhouse, along with lots of apples. Farmer Ben Wenk thinks the cooler weather of fall may cut down on the rate of water absorption by produce, making them sweeter ans more intense. He thinks its definitely true of the peaches, and probably for the eggplant and peppers as well.

That may have been the reason why the plum tomatoes I purchased at the Bar Harbor farmers' market two weeks were the best I've had all year: the naturally cooler climate of Maine coupled with long days of sun. Those tomatoes made the best pasta sauce I've prepared all season long. 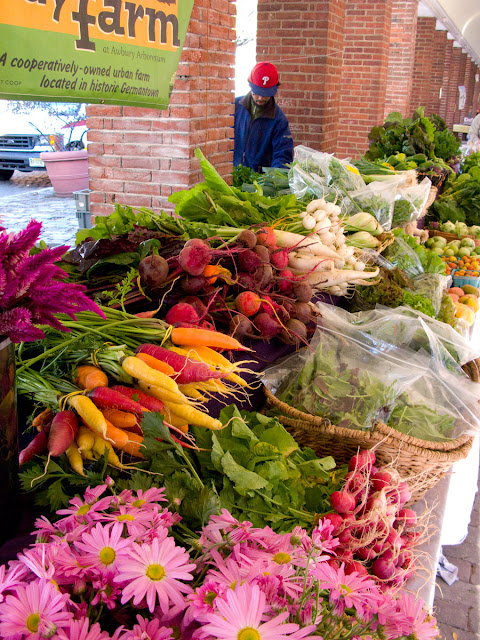 Weaver's Way, with some floral help, provided a colorful display of carrots and beets today at Headhouse. The carrots I bought at Bar Harbor also seemed particularly sweet and flavorful, again, perhaps due to the cooler climate and longer days of sunlight in more northerly climes. 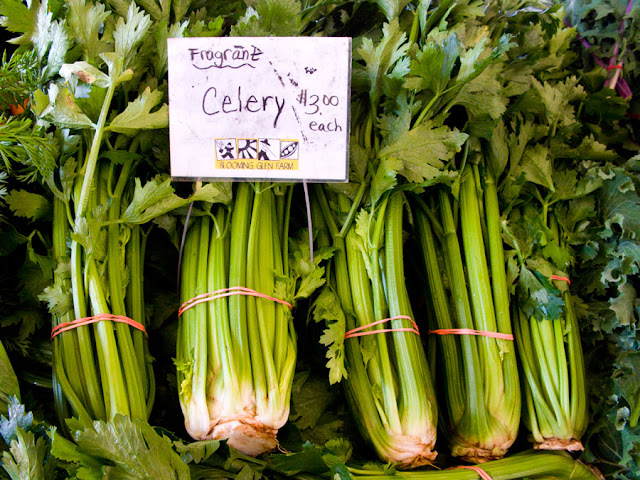 Blooming Glen Farm displayed these tender stalks of flavorful today, and I was quick up a bunch, both for the leaves and the ribs. I can't think of making tuna salad without copious amount of finely diced celery rib with added leaves. But tonight I may braise some stalks to accompany grilled chicken. Celery is a vegetable we don't usually think of cooking with, other than in soups or stews, but it's superb as a standalone side dish. 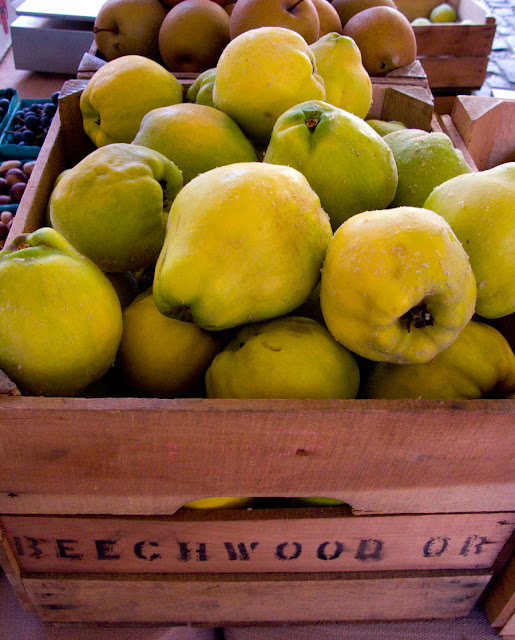 The things you learn on Wikipedia! Quince (here displayed in the case at Beechwood Orchard's stall at Headhouse) is called Marmelo in Portoguese, hence, the jam made from it was called marmalade. Quince is a great addition to apple pies, providing even more pectin as well as a slightly different type of tartness. Quince marmalade is a traditional accompaniment to sharp cheeses.
Posted by Bob Libkind at 12:51 PM No comments: