I've got a new gig as lead writer of the Jewish Exponent's new food blog and occasional contributor to the Philadelphia weekly newspaper's print and digital editions.

That means my postings here on Robert's Market Report will be less frequent than in the past, which for this blog dates back to June 2006.

Although my posts here at Robert's Market Report will be considerably less frequent, I'll do my best to keep you informed on major doings at local farmers' markets and the Reading Terminal Market through my Twitter feed: @robertsmarket.

When the subject demands more than Twitter's 140-character limit, I'll Tweet a link to a longer post here.

In the meantime, take a look my first effort for the Jewish Exponent. Although it's scheduled for publication in next week's print edition, it's available on-line now: a preview of Michael Solomonov's latest restaurant, Abe Fisher:

Posted by Bob Libkind at 5:20 PM No comments:

When is the summer produce peak? Right now. Mid-August is when tomatos and corn are at their best, peaches are bountiful and beautiful, summer squash vines droop under the weight of fruit, and farmers harvest peppers by the truckload. Plus, we've still got some blueberries, blackberries are in full flavor, and late summer apples are ready for picking.

The irony is that on a mid-August Sunday, fewer people are in town to take advantage of the bonanza at farmers market like the one today at Headhouse Square. Certainly the market wasn't empty, but the crowds are thinner than in June or even early July. Everyone's at the shore or the Poconos or standing on line waiting to get into the Louvre.

But that's okay. That means there's more for you and me to gather on our weekly trip to the farmers' market.

Making its seasonal debut today at Headhouse was North Star Orchards, which specializes in apples and pears, but had plenty of vegetables, too, including gargantuan red and orange beets. Plus three varieties of apples.

Here are some more photos of finds at today's Headhouse Farmers' Market: 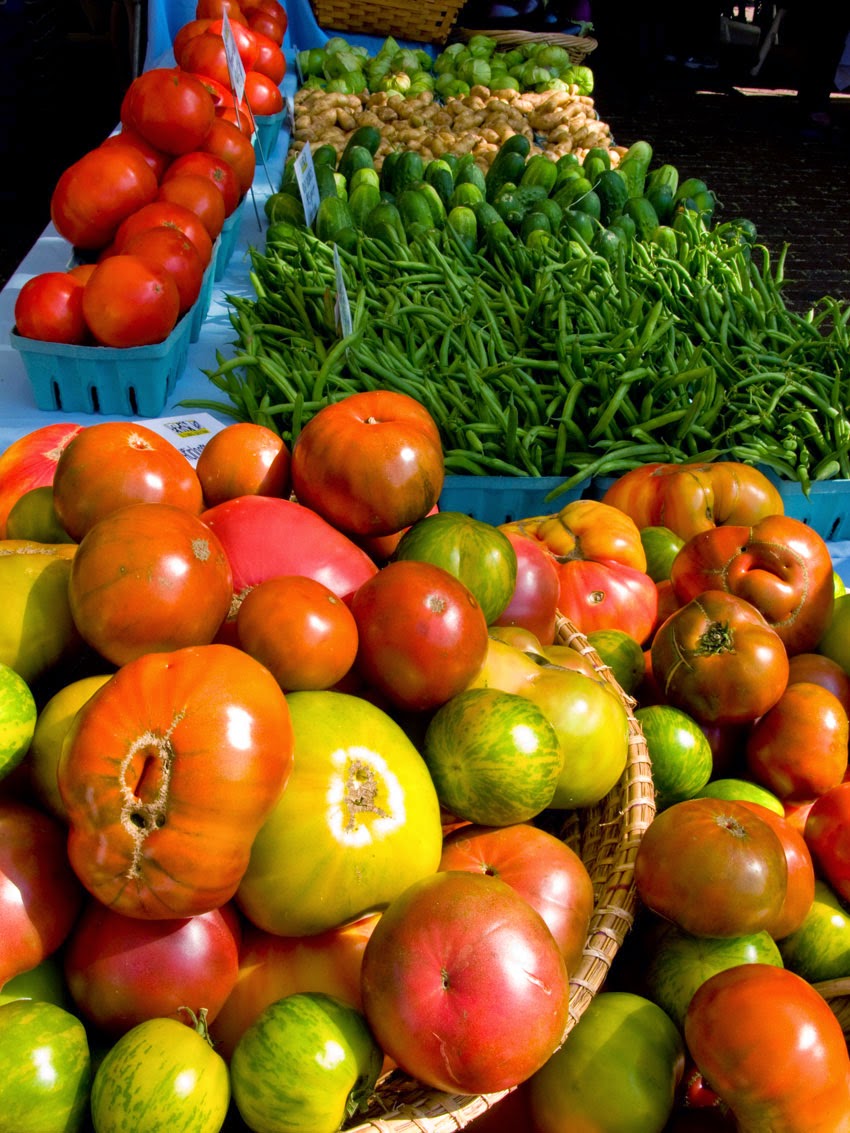 If tomatoes are abundant, it must be summer. Here's a basket of beauties from Blooming Glen at Sunday's Headhouse Square Farmers' Market.
Posted by Bob Libkind at 10:30 AM No comments: 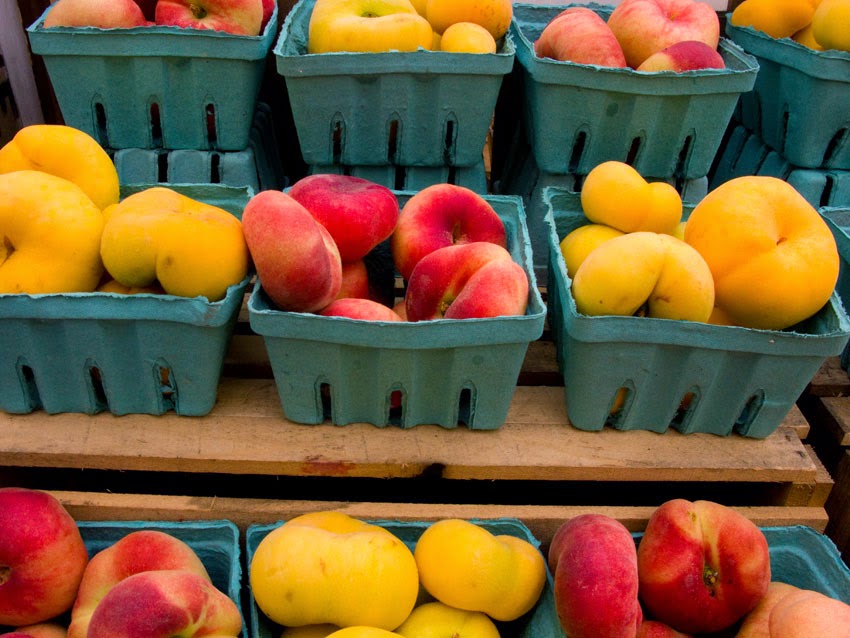 Saturn peaches, a.k.a. donut peaches, area in season along with the standard varieties. These were being sold Sunday for $5/quart by Three Springs Fruit Farm at the Headhouse Farmers' Market.
Posted by Bob Libkind at 10:22 AM No comments:

Peppers in all their tasty and colorful variety are flooding farmers markets. Whether sweet bells or frying, long hots, cubanelles, poblanos or jalapenos, there's a lot of ways to use them in the kitchen.
Poblanos are the go-to pepper for chile relleños, even if you bake the cheese-stuffed peppers rather than batter and deep-fry, a messy (though worthwhile) proposition.

For scallop or any other ceviche, dice a jalapeño or two as a garnish. I served it yesterday accopanied by slices of avocado and dusted with cilantro.

Sweet bell peppers of any color take well to roasting or grilling. And they're great in gazpacho.

Got a steak on the grill? Fry up some sweet frying peppers with garlic and/or onion to go on top.

More Than Cupcakes at Flying Monkey 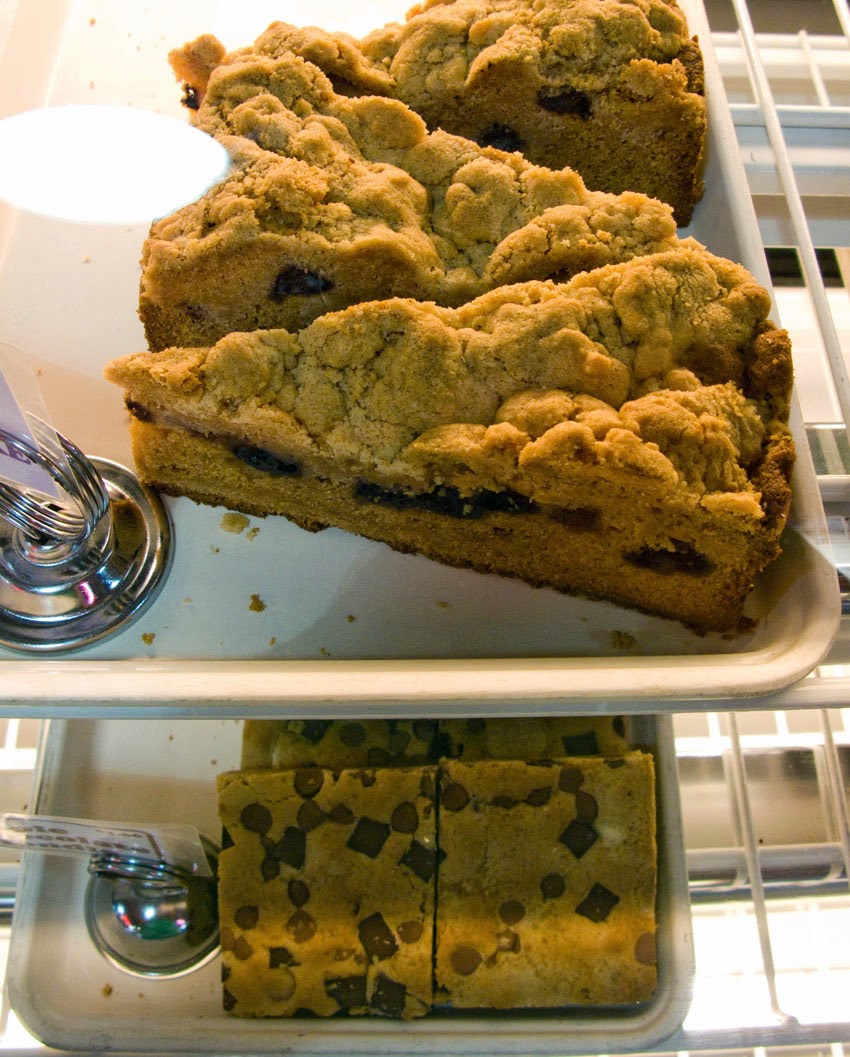 When Elizabeth Halen took over Flying Monkey Bakery at the Reading Terminal Market nearly four years ago, the stall was most known for its cupcakes.

Cupcakes remain a fad, if a bit fading, and Flying Monkey still sells a bunch of them. But the Center Court patisserie offers a whole lot more.

In addition to whoopie pies in various flavors, bar cookies and brownies, I'm an easy mark for the crumb cakes Elizabeth makes, particularly the fruit-accented versions, like the blackberry one pictured here. With its sour cream tang, this cake is an "adult" dessert.

Much more sweet and decadent, though, is Elizabeth's riff on the classic German buttercake, a.k.a. butterkuchen. Though there's certainly plenty of sugar it's considerably less off-putting than the St. Louis version, which is lovingly referred to by denizens of that city as "gooey" buttercake. The Philadelphia version, and Elizabeth's, is another "adiult" dessert.
Posted by Bob Libkind at 9:52 AM No comments: