Eight vendors showed up for the last day of the 2008 season at the Food Trust's Headhouse Square Farmers Market.

Amazingly, those vendors included one produce seller: Queen's Farm. It helps that much of the Yin family's output is in the form of shitaki and varieties of oyster mushrooms, but they also had some tatsoi to sell yesterday. Others who showed up included meat and poultry vendors, bakers, cheesemongers, and plant sellers.

One of those Headhouse bakeries will be selling outdoors all winter long at Fairmount & 22nd, home of the Fairmount market which closed for the season at Thanksgiving. Versailles, with its baguettes, boules and pastries, will be out there both Thursdays and Saturdays from 10 a.m. to 2 p.m.

The Clark Park and Fitler Square markets on Saturdays will continue year-round with a handful of vendors. Earl Livengood showed up at Clark Park this past Saturday and is considering being a regular there.

(So that's where Earl disappeared to while I was sipping coffee Saturday morning at the Reading Terminal Market's center court! Shortly after he brought in the produce with son Dwain and helper John, he left for Clark Park while they remained to sell at the RTM.)
Posted by Bob Libkind at 10:34 AM No comments:

Much of the funding is in place for the Fair Food Farmstand's move to the 12th Street side of the Reading Terminal Market, according to RTM GM Paul Steinke.

In addition to the previously reported grant from the U.S. Department of Agriculture, the SVF Foundation of Newport, R.I., is kicking in a substantial proportion of the needed funds. The SVF foundation is largely the creation of Campbell Soup heiress Dodo Hamilton. Its primary mission is to help protect the world's food supply by preserving rare and endangered breeds of livestock, and it sees Fair Food's mission as complementing its goals. The SVF Foundation has a history of supporting efforts of the White Dog Foundation (Fair Food's parent organization) furthering the marketing of heritage breed farm animals. SVF is based at Swiss Village Farm in Newport, where Hamilton maintains a home. Much of SVF's breed preservation work is done in conjunction with the Tufts University veterinary medicine school.

Steinke said about 75 percent of Fair Food's moving costs appear to be covered through these and other grants. Much of the remainder will probably come in the form of a low-interest loan from the Reading Terminal Market Corporation, the non-profit organization which runs the market. Similar loans have been made to other vendors at the market for improvements.
Posted by Bob Libkind at 12:08 PM No comments:

Email ThisBlogThis!Share to TwitterShare to FacebookShare to Pinterest
Christmas Fish

John Yi, the center court fishmonger at the Reading Terminal Market, has added a fine array of swimmable food for Feast of the Seven Fishes celebrations. Although baccala could not be found, there was plenty of fresh cod, octopus, squid (whole as well as cleaned and separated), as well as herrings ($3.99/pound for either large for smaller sardine-sized specimens), smelt ($4.99) and spearling ($3.99).

Giant oranges are traditional holiday fare, too. The Fair Food Farmstand was selling organic varieties from Florida for $1.50 apiece; the prices for similar conventionally-grown large oranges were only slightly less dear at Iovine Brothers where tangelos seemed the best deal in orange-type fruits, at six for $1. Juice oranges and small navels were twice that price.

Also at Iovine, Hass avocados from Mexico were down to 89-cents apiece; alas, if you want to make guacamole, the limes (and lemons) remain pricey at three for a buck. Iovines was selling organic Granny Smith applies for 99-cents a pound, the same as for many conventional varieties, including Grannies, Staymans, Red Delicious, etc.

Back at Fair Food, a split open sample of watermelon radish was drawing attention from passersby who had never seen them before. As always there was an interesting collection of winter squashes, varyingly priced about $1.50-$2.00 a pound, including Blue Hubbard and Turban.

Dwain Livengood was back at his family's Saturday stall helping out before he and his wife Audrey leave for a year in Honduras volunteering at a Christian home for children. They spent this past week in Florida at a training course, where Dwain learned the wonders of the Moringa tree, which can grow in subtropical climates with poor soils and can be used as food (its leaves offer complete protein), animal feed and fuel; its powdered seeds (in the form of defatted meal) can be placed into a container of turbid water and will remove 99 percent of the sediment and organic impurities. Alas, it can't withstand Lancaster County winters, so don't expect to see Moringa tree products at the Livengood farm stand.
Posted by Bob Libkind at 11:26 AM No comments:

Headhouse Square vendors didn't outnumber customers this morning, but it was close.

Five produce vendors displayed their product: Beechwood Orchards, Blooming Glen Farm, Margerum's, Queen Farm, and Weaver's Way. Among the other vendors present were Mountain View Poultry, Griggstown Quail Farm, and Versailles Bakery, among others. David Garretson of Beechwood Orchards said he'll keep showing up until the last day for Headhouse, scheduled for the Sunday before Christmas, unless foul weather prevents him from making the long drive from Biglerville in York County.

Although all but two of the city's other outdoor farmers' markets have closed for the 2008 season (the exceptions being Clark Park and Fitler Square, which are open Saturdays year-round), Versailles Bakery intends to keep showing up at the site of the Fairmount market (Fairmount and 22nd) as long as there are customers. Although that market had its last day the day before Thanksgiving, Versailles was doing a brisk business in brisk weather this past Thursday, setting up just before lunchtime.

Back in September I reported that Reading Terminal Market GM Paul Steinke would like to relocate the Fair Food Farmstand to the space since vacated by Rick's Steaks. It's looking more likely, as the market and the Farmstand are now working on the details of such a move. Steinke said Fair Food could pop up along 12th Street as soon as early 2009.

From the RTM's perspective, having a produce purveyor located behind a broad expanse of windows on the market's busiest pedestrian perimeter cements its image as a place to buy food for home preparation and consumption rather than as a mere food court.

For the Fair Food Farmstand, the move would further its educational mission by dramatically increasing its visibility while providing needed expansion space.

It's no secret that the Fair Food Farmstand has been seeking to expand since it has outgrown its current space, acknowledged Ann Karlen, the White Dog Foundation's director of Fair Food programs, including the farmstand. Initially the FFF considered enlarging its existing stall into some of the adjacent seating area. Those plans were placed on hold while Karlen and her colleagues considered the future direction of the non-profit operation and funding possibilities.

The move won't come cheaply. Karlen, however, believes much of the funding can be secured through a grant from the U.S. Department of Agriculture, based on preliminary discussions with officials in charge of disbursing grants for programs like Fair Foods'.

"We've outgrown our space and were planning on expanding even if we didn't move," Karlen said. The new location "is the perfect size, more than double what we have now. It's a premier location on a busy corridor with window frontage. We're a non-profit, and a big part of our mission is promoting local food, so it gives us more visibility, furthering our educational mission while allowing us to expand the business."

Steinke told me Fair Food might first take over the kitchen area of the former cheesesteakery and expand, as needed, into the stall's seating area on a seasonal basis when they've got more produce to sell. A Fair Food Farmstand café, serving soups, sandwiches and other items prepared from locally producted agricultural products could also be part of the future.

Besides obtaining funding, one of the more difficult aspects of any move will be refrigeration. Like many other purveyors, all of the Fair Food Farmstand's refrigerated storage space is located in the rear of the market (others have their storage space in the basement). Stand volunteers will have long a long way to haul those boxes of produce every morning when they relocate. 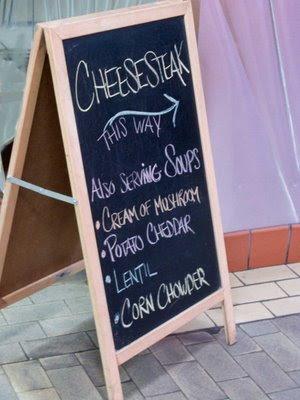 The Down Home Diner put cheese steaks back on the menu and is touting that fact with their blackboard.

Cheese steaks are also on the menu now at the Dutch Eating Place as well as Spataro's, which added them when they relocated to center court more than a year ago.

But that's not all.

The market recently gave permission to Carmen's and By George to augment their existing menus with cheese steaks, beginning in the New Year.

GM Steinke says any number of existing cheese steak sellers from outside the RTM have filed applications to become vendors. He said those application will be considered if a suitable space becomes available. Steinke's point of view is that the demand for cheese steaks is big enough to profitably support multiple vendors.

One suitable space could be the vacant stall opposite Tootsie's Salad Express, which formerly housed Everyday Gourmet and, before that, Andros. The space already has a heavy-duty exhaust system installed, which is necessary for any sort of grill operation.

In the adjacent space, temporarily being used by Kauffman's Lancaster County Produce, the paperwork is moving along for a new pork purveyor to replace Dutch Country Meats, which gave up the ghost earlier this year. A draft lease is now being reviewed by prospective butcher.
Posted by Bob Libkind at 12:00 PM No comments:

The Reading Terminal Market's day stall space on Saturdays is nearly at capacity, with the addition of two new vendors.

Lindendale Farm of Lancaster County, operated by Andrew Mellinger and his family, is selling various goat cheeses and goat cheese cake made of milk from their herd. Also new is the "Applesauce Lady" who claims to sell an applesauce that "tastes like apple pie". both are located near Fisher's Pretzels.
Posted by Bob Libkind at 11:50 AM No comments: