Face of the Market

For about a year, one aspect of the Reading Terminal Market's advertising and marketing campaign has focused on photos of regular market shoppers. This year, the market is seeking your photos to determine who will be featured in the next campaign.

It's called Face of the Market, and requires you to submit a photo of yourself at the market along with a brief explanation of why you love the market. Winners must be available to pose for a professional photographer August 20.

Details can be found here.
Posted by Bob Libkind at 3:41 PM No comments:

Two festivals are coming up at the Reading Terminal Market this summer, one a relative newcomer, the other one that's been going strong for more than two decades.

The relative newcomer (it's only been held for three or four years, iirc) is the Ultimate Philadelphia Ice Cream Festival. This year it will celebrate the 150th anniversary of Bassetts Ice Cream, one of the market's original tenants. It will be held in Center Court next Saturday,

In addition to Bassetts, Philadelphia's finest ice creams will be represented by Miller's Twist (which features Kreider Farm's product), Franklin Fountain, Uncle Dave's, Capogiro and Bredenbeck's Bakery and Ice Cream Parlor of Chestnut Hill. Uncle Dave's is based at Shady Brook Farm in Bucks County, which supplies some of the local fruits and vegetables (including corn) sold at Iovine Brothers Produce. The Berley Brothers of Franklin Fountain, located on Market Street between Front and Second, were prominently featured in an article about ice cream sodas in last Wednesday's New York Times.

The event also features arts and crafts for the kids, live music, games, and more.

For 22 years (with a one-year hiatus) the Reading Terminal Market has celebrated the commonwealth's food heritage with its annual Pennsylvania Dutch Festival. This year it will be held August 11, 12, and 13 from 8 a.m. to 5 p.m. each day.

The three-day festival will take place in the Center Court seating area and will feature handmade crafts and traditional foods. On Saturday, the festival also moves outdoors on Arch Street to create a country fair in the city. Amish buggy rides and horse drawn wagon rides around the market, a farm animal petting zoo, and live bluegrass music round out the entertainment.
Posted by Bob Libkind at 3:29 PM No comments: 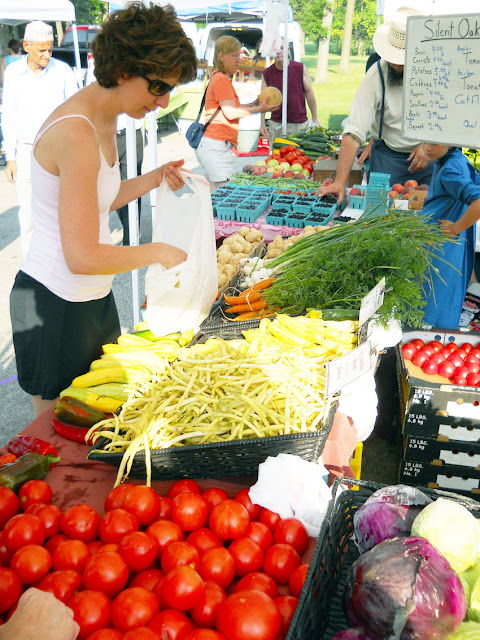 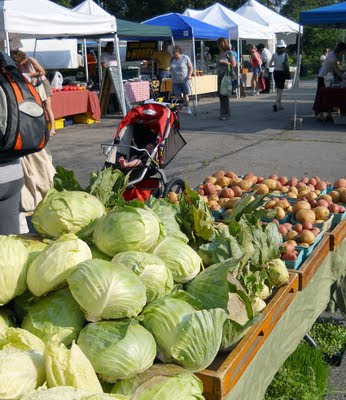 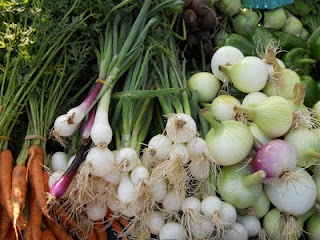 Posted by Bob Libkind at 1:24 PM No comments:

Back from a one-week visit to St. Louis, one of a number I've made since my sister moved there almost 30 years ago.

I managed to consume only one of the city's three iconic foods. That would be toasted ravioli, which is not toasted but deep fried. When not overly greasy from poorly executed deep-frying, these morsels make a fun appetizer when dipped in the accompanying tomato sauce.

The populace of St. Louis having a gigantic collective sweet tooth, the remaining food icons are the Ted Drewes "concrete", a super thick shake made from real custard at the Ted Drewes custard stand, and Gooey Butter Cake. The latter is descended from German butter cake, a fine example of which is produced by Haegele's in Mayfair in Northeast Philadelphia. St. Louisans muck it up, however, by putting super gooety, corn-syrupy, fruit and/or nut toppings over it. A dentist's dream.

You can, however, skip the toppings by ordering Deep Butter Cake, which skips the gloppy, gooey topping. Although not quite as rich as Haegel's version, this is a fine cake, at least the version I picked up at Federhofer's Bakery in South St. Louis, home to much of the region's remaining German population. Their Deep Butter Cake was finely crumbed and tasted like a lighter version of a pound cake. A very nice cake, indeed, perfect with coffee. Federhofer's was a complete bakery, with breads and rolls in addition to a nice variety of cakes, pastries and cookies. We took home a rye bread, softer than a Jewish rye but with clear rye flavor and maintaining a nice  chew.

Earlier in the week in search of Deep Butter Cake I visited The Hill, St. Louis's Italian neighborhood, where two of baseball's great catchers grew up together: Yogi Berra and Joe Gargiaola. There I stopped by Missouri Baking Company; alas, no Deep Butter Cake because they were using only their small oven last week, having taking down the big oven which is being replaced by a new one this week. Instead I purchased some excellent assorted cookies, light and crumbly, biscotti (which was a tad moist rather than dry) some small, round seeded sandwich rolls which tasted not unlike Sarcone's, and sfogliatelle, slightly cakier than Isgro's or Termini's and dusted with confectioner's sugar, but tasty and with the absolutely necessary crackly clamshell exterior.

Down the block I was drawn to Volpi's, a mid-sized business whose salamis, mortadelli, and other cured meat products can be found nationwide. At least a few Philadelphia establishments use and/or sell their products, including DiBruno's and Salumeria.

The Hill has a couple other bakeries and grocery stores full of Italian imports, as well a bocce club and numerous restaurants, good, bad and middling, and coffee houses. There was also a nice restaurant/kitchen supply store. What I didn't spy, however, was an Italian ice establishment. Gelato, yes. Lemon ice, no. Seem like a business opportunity, especially during the city's hot, humid summers.
Posted by Bob Libkind at 12:55 PM No comments: