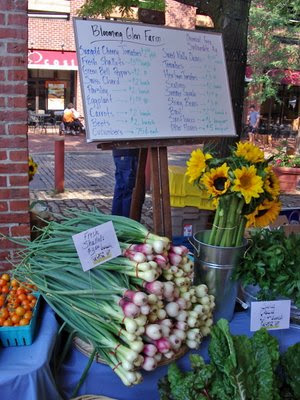 Today was the second week for the Headhouse Square Farmers' Market and I was there.

Over at North Star Orchards, field grown tomatos were much in evidence, $2.50/pound. I purchased three hefty specimens; they aren't pretty, due to skin cracking, but based on the one I enjoyed with lunch, they are superior in flavor. Real tomatoes have arrived!

I purchased a fresh chicken from Mountain View Poultry Farm (they sell fresh and frozen chicken and turkey, as well as grassfed meats, organic produce and organic eggs) which I'll cut up and put on the grill tonight. I'm looking forward to tasting the chicken.

Pictured on the right are some fresh shallots and flowers at the Blooming Glen Farm stall, immediately found upon entering on the Lombard Street side.

The number of merchants seemed about the same as last week, but like then, there were a number of spots that were posted as space for a particular vendor, but no one was there. Perhaps I arrived too early (10 a.m., the market's opening hour) or perhaps they were no-shows.

Since everyone was talking about the daise on egullet.org last week, I bought a bunch from Queen Farm to mix in with the red butter lettuce from Wimer Organics.

Over at A.T. Buzby, they said the canteloupe was a couple of weeks early -- they started picking last weekend. Based on the wonderful melon aroma that wafted throughout my car by the time I got back home to Fairmount, I'd say it's a good melon. We'll crack it open tonight after it's chilled.