Earlier this week I wrote of Dutch Country Meats' de-emphasis of fresh pork products in favor of German-style deli goods and other prepared foods, including a nice selection from Rieker's, the sausage and deli emporium in the Far Northest. The shop has taken another big step away from fresh pork with the addition of this week of baked goods from Haegele's, a superior bakery in another Northeast neighborhood, Tacony.

Today they featured six of Haegele's product seen below: butter kuchen (butter cake), bienenstich kuchen (bee sting cake, with a custardy filling, and a sugar or honey almond topping), Wien kuchen (Vienna cake, which appears to be chocolate with a filling I couldn't identify just by looking at it -- a taste test is in order!), hamantaschen, apple strudel, and jelly stiche (jelly stings?). 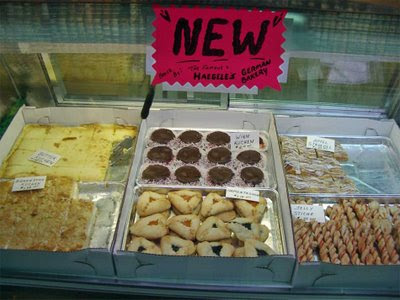 Across the aisle, at Kauffman's Lancaster County Produce, Benuel Kauffman is now selling unpasteurized cup cheese, made by a neighbor from his two Jersey cows. Ben explained that it's used as a spread, usually on bread of crackers with some jam or preserves. I've checked recipes to find out exactly what it is, but the ones I googled were quite different, though many involve heating milk, adding butter and egg and finishing with cream. The consistency is more liquid than sour cream, hence it is served in cups. I tried a sample from Ben on a cracker with jam, and it was quite pleasant. He's selling it for about $4 a container (I didn't check the per pound price). 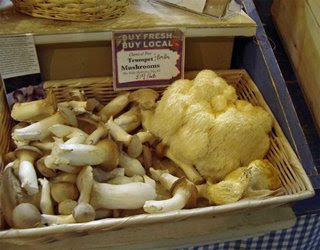 A mushroom I've only occasionally seen in stores made an appearance today at the Fair Food Farmstand. It's the "pom pom" pictured here from Oley Valley Mushroom Farm. Pom pom is just one of the names this fungus goes by. It's scientific name is Hericium erinaceus. Less marketable names (hence the use of "pom pom" in retail settings) this delicate fungus goes by include lion's mane, monkey's head, elf abalone, Bear's Head, Old Man's Beard, and Satyr's Beard. I've enjoyed this choice mushroom sliced and sauteed, and I wouldn't argue with those who think its taste suggests mild seafood, like lobster or scallop. It was available today for $14/pound.

Oley Valley Mushrooms was among the winners at this year's Pennsylvania Farm Show, as was the Livengood Family Farm, which sells at its own center court stand on Saturdays.

Joyce Livengood bested competitors in four vegetable sub-categories to win the Grand Champion Vegetable Market Basket, repeating her victory of last year. Her Grand Champion entry was in the subcategory for eight-piece displays of in- and out-of-season vegetables. She aslo took home second place for her entry in the sub-category for five-item, in-season, Pennsylvania grown vegetables.

Fair Food Farmstand can't find room for the boxes used by farmers to deliver their goods (photo below), so they're stacked along the perimeter of the stall. Seems now that winter is here, the farmers haven't been around to pick up their wooden containers. Co-manager Sarah Cain says visitors to the Home Show have sought to purchase them. Just make her an offer and see if she'll bite. 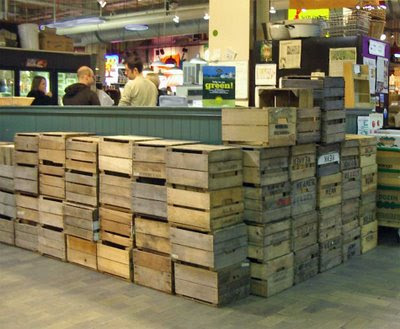 Fair Food's space problems aren't limited to storing wooden boxes. They'd love more refrigerated storage space and additional selling space. Expansion into the adjacent seating area or a move within the market is within the realm of possibility (though by no means a certainty) by the peak of the 2008 season growing.

La Cuchina expects Electrolux to install the new kitchen appliances within the next two weeks, and will open its cooking class schedule shortly thereafter.
Posted by Bob Libkind at 11:51 AM