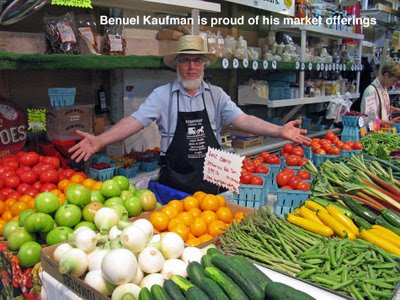 Trickle to rivulet to torrent

The trickle of summer fruits I wrote about before the summer solstice is turning into a rivulet. Soon we'll have a raging torrent.

Over at the Fairmount & 22nd Market today, Sam Stoltzfus offered black raspberries at $3.95/pint; Earl Livengood had his organic raspberries for a little bit more. Bill Weller was selling what may be the season's last strawberries, $4.50/quart, along with blueberries and dark, sweet cherries, the best I've had so far this season: big, plump with juice, flavor and sweetness. Livengood also had the first Lancaster County corn I've seen this season (not his own but from another Lancaster County farmer). The fourth vendor at Fairmount today was Versailles Bakery.

At last Sunday's Headhouse Square market, Culton Organics featured haricots vert, pricey at $7 but delectable looking. Sweet cherries at Beechwood Orchards were $6.50/quart or $3.75/pint, with blueberries at $4.50/$2.75 and strawberries $3.50/quart. Margerum's was selling blues for $3.50/pint, Buoni Amici for $3, with cherries priced at $5/quart or $3/pint. Every vendor's lettuces and greens looked inviting.

Over at the Reading Terminal Market, Benuel Kauffman's Lancaster County Produce offered sweet cherries (and a few sour pie cherries, too) at $3.95/pint. We should start to see more pie cherries this weekend; the pie cherry season is short, usually no more than two or three weeks. Ben also has red and yellow pear tomatoes ($3.95/pint) and sun golds ($4.95).

A couple weeks ago I mentioned the wild Alaskan king salmon selling at John Yi's for $22.95/pound. I should have waited a few days. Since early last week it's been $19.95. And for you shrimp 'n grits lovers out there, John Yi has some outrageously sized extra jumbos from the U.S. South Atlantic coast (that means South Carolina or Georgia, folks) for $22.99; they come in at four to six to a pound. Actually, these big shrimp look ideal for the grill. Now that spring is officially over, the price of mackeral surged a bit to $3.99 from $2.45-$2.99. Wild and farm-raised striped bass (the latter are actually a cross of striped bass and white bass) selling for an identicial $5.99 for whole fish; a very similar marine bass, farmed European Branzino, is $8.99.
Posted by Bob Libkind at 5:30 PM