Street Signs at the Market 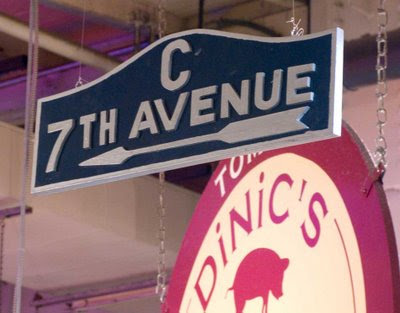 Staff and merchants know that the aisles of the Reading Terminal Market have names. But few others do.

That may change with the reinstallation of street signs.

The broad north-south aisles between Arch and Filbert are the letter-demarcated “avenues”, the east-west aisles running from 12th Street to the market’s loading alley are the “streets”. Until the early 1990s wooden signs marked each intersections.

The sign have been rescued fromn the market’s basement and cleaned up and are now being installed at the intersections, like the one pictured above.

The market started the reinstallation just in time for the annual dinner this past Saturday held by the Reading Terminal Market Merchants Association, which included an 11-minute video which included photos of the signs in days past.

Now, if only the map of the aisles on the market’s web site included the street and avenue designations. (The PDF version downloadable from the website does indicate streets and avenues.)