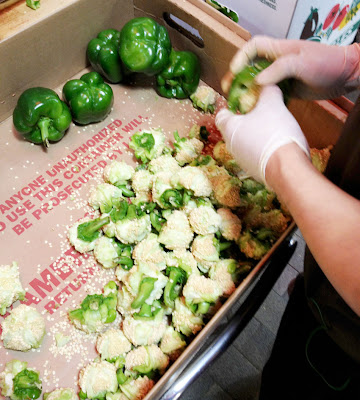 Before those sweet bell peppers top your roast pork sandwich at DiNic's in the Reading Terminal Market, they've got to be prepped. Every morning Jun snaps out the cores before the peppers go into the oven with a light dressing of olive oil.

Earlier this week I had a hankering for one of Tommy's sandwiches and managed to order something other than the roast pork. Instead I opted for the brisket, which you should try. Tender and flavorful it's like beef done as pulled pork -- but even more succulent. I kept it simply topped with roasted hot peppers.

Tommy's partner and son, Joe Nicolosi, says they won't be rushing to open their new location in the former Harry Ochs stall, because they want to make sure they do it right. They're aiming for mid-January, so they can have some shake-down time before the auto show crowds descend.
Posted by Bob Libkind at 3:21 PM