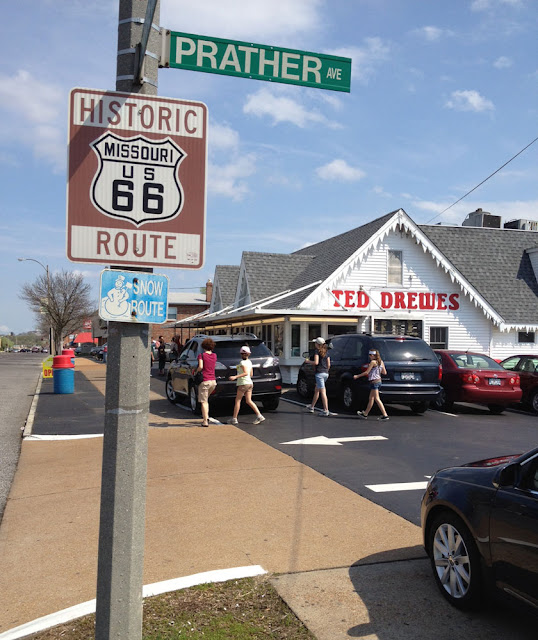 My week in St. Louis ended this past Wednesday, but not before a visit Ted Drewes, the landmark custard stand in the city's south side on Chippewaw Avenue, a.k.a. Route 66.

Since the temperatures were in the low 80s, the frozen dessert hit the spot. Only one flavor, vanilla, but you can have it mixed with a couple of dozen different flavors, or build various sundaes. Along with gooey butter cake and "toasted" ravioli, Ted Drewes is one of the Gateway City's great contributions to the American culinary tradition. (Wisconsin is big on frozen custard, too, and I'll try that late next month.)

The other culinary high points of my visit: chicken feet at dim sum at Lulu's (as good as any I've had in Philadelphia's or Vancouver's Chinatowns) and a lamb burger at the Schlafly Tap Room, a brewpub downtown, which makes a far better brew than its larger St. Louis competitor.

A decided miss was the pastrami served by Lester's Sports Bar & Grill. I was sent there by a local who original hails from central New Jersey. He claimed Lester's pastrami was better than Carnegie Deli's. I doubted that, but I still should have known better. Even though the restaurant is owned by a Brooklyn-born octagenarian millionaire, the pastrami was a royal flop. The flavor wasn't terrible but the meat was all wrong. Where Carnegie, Katz's and our own Herschel's and Famous use beef navel, Lester uses brisket. Good for corned beef. Wrong for pastrami.
Posted by Bob Libkind at 3:25 PM