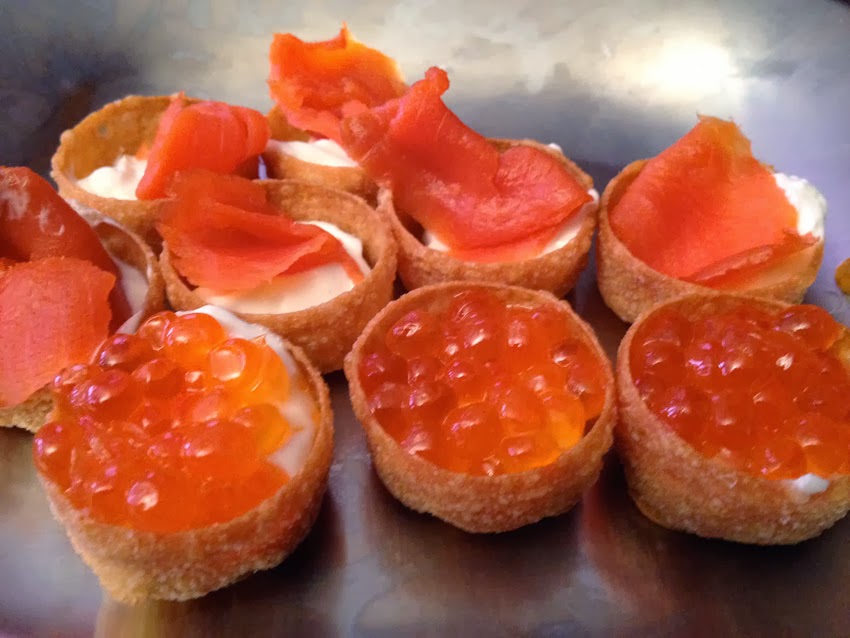 For New Year's Day football-watching (and Superbowl Sunday as well) She Who Must Be Obeyed and I set up a variety of small bites for noshing through the day and night. In years past Pigs in the Blanket have been the star attraction, but we also indulge in appetizers from the frozen aisle at Trader Joe's and other emporiums: phyllo-wrapped savory treats, dips and chips (including guacamole) and similar high-calorie, high-fat fare.

This year I wanted to replace the worst offenders with something less enlarging to the gut, or at least not quite as unhealthy. I still went with the guac (homemade). But instead of oversalted tortilla chips I swapped them out with pita chips.

Still, I wanted something special and a little out of the ordinary.

Coming to the rescue was Otolith Sustainable Seafood, a small Philadelphia purveyor which does some of its own fishing in Alaska and also buys seafood from other small fishing operations in the Sitka and Petersburg areas. Almost everything is individually quick frozen and everything I've tried so far has been absolutely delicious. In fact, the king (chinook) salmon is the best I've ever had, including during a two-week visit to the 49th state.

To serve them I used mini-pastry shells (about the diameter of a quarter) purchased from the South Philly Ikea's Swedish Food Mart. Into each went a dollop of non-fat Greek yogurt, then a heaping spoonful of roe. To finish out my plate I filled the remaining pastry shells with more yogurt, then a curl of smoked salmon.

Next time Otolith offers salmon roe, I won't wait for New Year's to indulge. Otolith sells its seafood at local farmers' markets (including Rittenhouse and Headhouse) as well as through some natural food stores in the area. They'll also deliver to your door.
Posted by Bob Libkind at 5:24 PM