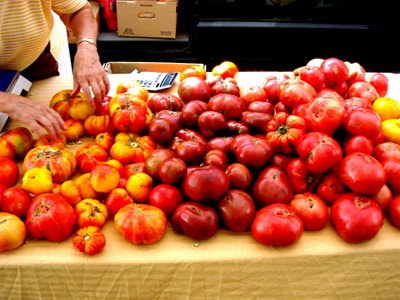 Blackberries (the fruit, not the e-mail device) have started to show up at stands other than Livengood's. Fair Food had some last Saturday at the Reading Terminal. MIssing from all the farm stands, however, were apricots. The season for this subtle stone fruits was more normal in length, unlike last year when they seemed to last from late spring through late summer. Over at Iovine's lemons improved in price (slightly) to a quarter apiece.

The Best Chef of Southeastern Pennsylvania competition at the RTM Saturday accentuated a market boondoggle: the kitchen located in Foster's. That kitchen was originally built, under the auspices of a prior market manager, as a "public" kitchen where demonstrations and cooking classes could be held in front of a large seating area. The demonstrations and classes were reasonably successful and became a focus of the market's public programs.

At the time, Fosters was located in the corner where Blue Mountain Vineyards now sells its wares. But owner Ken Foster was looking for a better location and cut a deal with current market manager Paul Steinke. The deal made eminent bottom line sense to both Paul and Ken in the short run, but it was penny-wise and pound-foolish. The result was, for all practical purposes, loss of the kitchen. Foster's makes some limited use of the kitchen but it is hardly the focus of activity it was meant to be.

Which brings me back to Saturday's Best Chefs' competition. Instead of using the kitchen in Fosters the competition was forced to set up a separate, temporary kitchen in the seating area across from Golden Seafood and Fisher's Pretzels. Because the permanent kitchen is now part of Foster's, using it for such a Saturday event cuts down on selling space on the busiest day of the week.

The market needs to reverse course: either build a new kitchen in a public space and give Foster's more selling space, or move Fosters and open up the current kitchen.
Posted by Bob Libkind at 11:53 AM