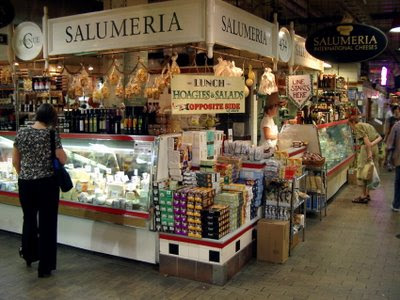 Salumeria was one of my stops today, supplying some of the fixings of a summer sandwich dinner: speck (think smoked prociutto), mortadella, aged provolone. It will go with some tomato from Fair Food Project, lettuce from Earl Livengood (purchased last Saturday), and baguette from LeBus (Metropolitan was sold out).

Cactus pears are in abundance at OK Lee; the price is down to 79 cents apiece. I'm going to try making a sorbet from the puree, but they make excellent margaritas. What looked like local canteloupes were selling for 99 cents apiece. New Jersey peaches 79 cents/pound, Hass avocados 99-cents each. Lemons three for a buck, limes four for a buck.

Iovines' lemons were pricier at 50 cents apiece, and limes went up in price again to 20 cents each, vs. 10 cents last week. Their Hass avocados were $1.49, as were the Califoronia donut peaches. Both Jersey and California yellow peaches and California white peaches priced at 99 cents pound. Jersey blueberries $1.99/pint. The bell pepper survey: green 99-cents, all others $3.99. Frying and hot peppers 99 cents.

Over at Fair Food project I picked up some plums ($2 a half-pint) as well as the tomato. Ann Karlen was pushing the Meadow Run lamb this week -- 10 percent off.

A.A. Halteman has closed down, opening the way for Charlie Giunta to start building his natural meat stall opposite Iovine Brothers. No visible action yet on the LeBus and Spataro moves.

Over at today's Fairmount & 22nd farmers' market, Sam Consylman of Earl Livengood's stand was bragging about the celery, the first of the season. The stand was jammed with patrons when I stopped by about 4 p.m.; most were going for the corn. Also at today's market, Carol Margerum and an Amish vendor selling baked goods and produce.
Posted by Bob Libkind at 7:32 PM