If ever there were signs of spring at the Reading Terminal Market, two of them reappeared Saturday: Earl Livengood's farmstand and ramps at Iovine Brothers.

Earl's offerings are necessarily limited. Overwintered spinach (not the greenhouse variety) may have the occasional white spot on the leaves, but Earl's crinkly spinach is the real thing. (Benuel Kaufman also has fresh local spinach, and it certainly looks more picture perfect: that's because it's greenhouse spinach.) Earl also is selling a variety of root vegetables. I picked up some German butterball potatoes and parsnips; they were great pureed together for dinner tonight. 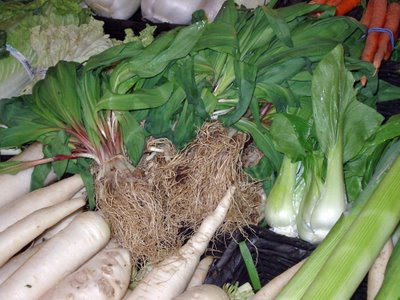 Over at Iovine Brothers big bunches of ramps (photo at right) were selling for $2.95, enough to serve four. I chopped and sauteed them in just a tiny bit of chicken fat (I didn't have bacon fat, which would have been preferred) then served them atop sauteed scallops (about $13/pound for the dry scallops at John Yi, iirc).

Dutch Country Meats is "closed for renovations". It's been sold to a new owner and should open in a few weeks. I hope they keep selling the German style wursts and loafs which they added to their lineup after Siegfried's closed.

Another sign of the change of seasons was the reappearance of soft shell crabs at John Yi's. Always pricey, they were particularly dear at $6 apiece today.

Jim Iovine says he expects to have fiddleheads in about 10 days. He's working with his contract farmer to add new crops this year and expand production. If the weather doesn't deteriorate he expects fine crops of strawberries and raspberries, along with all the other staples. This week he was selling Florida strawberries for $1.49 for a one-pound clamshell (O.K. Lee had them for 99 cents). Key limes were $1.99 for a one-pound bag, kumquats $2.99 for a small box. Another sign of spring: morels, $74.99/pound (porcinis were $49.99). String beans 99 cents, avocados $1.99 each ($1.29 at O.K. Lee). Limes were 3 for a buck, vs. 4 at the competition. 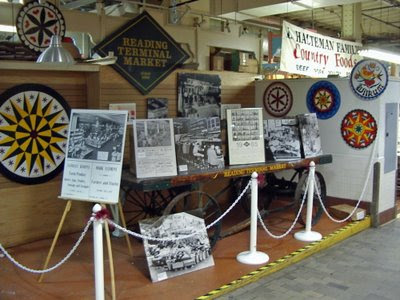 Opposite the seating area behind the Beer Garden the RTM has updated its display of photos and artifacts (photo at left). The added archival photos include a poster depicting individual merchants circa 1984. Check out the mustache on Charles Giunta!