Corn from the Good Ol' Days

It's pretty hard to find old fashioned, non-hybrid corn these days. But Earl Livengood had it last Saturday, and I expect it will also be available from him at the South & Passyunk market Tuesday afternoon and the Fairmount & 22nd market Thursday afternoon. The certified organic ears were priced at 50 apiece .

As expected, these "open pollinated" ears were not nearly as sweet as modern supersweet hybrids. Taste was noticeably but not overwhelmingly "cornier". The ears were much more uniform than I expected to see, though the kernels were on the large side. (I did not strip the ears open to check quality at the stand. I abhor that practice and would rather, pardon the expression, "feel it up" with the husks in place to determine if there are any gross deformities.)

All in all, it was a nice change and a worthwhile reminder of what corn used to taste like and why people would boil the water before picking the corn and then rush it to the pot. But, unless I get nostalgic again, I'll stick to the modern supersweets.

Also at the RTM this past Saturday, lots of local produce at both Iovine Brothers and OK Lee to supplement their regular fare. Iovine's comes from Shadybrook Farm near Yardley, OK Lee's from Lancaster County. Among the items: cantaloupe, wax and green beans, corn. Certainly not local, but a welcome seasonal return nonetheless at OK Lee: Cactus pears, two for a buck. Makes great magaritas.

Suffering succotash! Lima beans at the height of their season. At least one of Earl Livengood's farmhands was popping them raw as a snack this morning. Also new this week: fresh, young, small celeriac. Earl's also got some additional varieties of heirloom tomatoes.

Blackberries and peaches still going strong, of course, at Livengood's, Kaufman's and Fair Food, but also making an appearance in advance of autumn are some early pears at Kaufman's. Benuel says he expects to have Sanza apples next week. (Benuel spells the varietry with a 'z', but I've only seen it with the second 's', Sansa.) 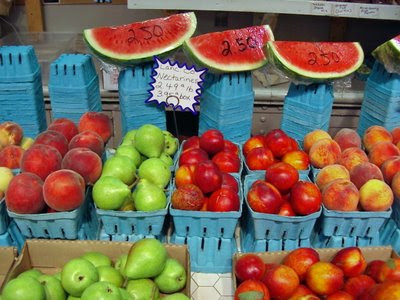 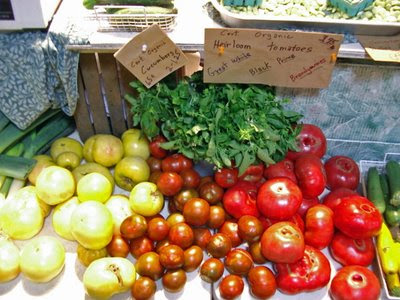 Earl Livengood's heirloom tomatoes
Here's what I bought at the RTM Saturday: