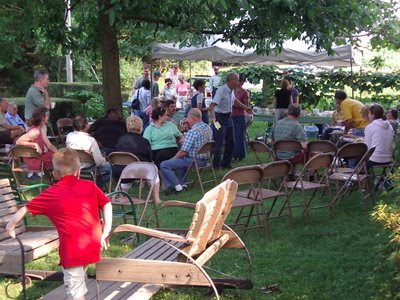 The rains came and went last Sunday (July 29), then about three or four dozen produce lovers made their way out to Lampeter, Pennsylvania, on the outskirts of Lancaster, where the Livengood family held their annual corn roast and pot luck for customers they serve at Reading Terminal Market, South Street market, and Fairmount market. It was the sixth or seventh year they'd held the event, but the first time I had the opportunity to attend.

Hosts Earl, Joyce, Dwain and Dale Livengood, along with other family members and farmhands, provided the setting (the Livengood's shady side yard), the corn, canopy and table, cold drinks and hospitality, while the guests provided the potluck which mostly took advantage of seasonal produce goodies. (The only meat I spied and tasted was some delicious Biranyi, but the shredded chicken was used more as another flavoring than a main ingredient.)

Following the meal, Earl introduced the family and then presided over the afternoon's entertainment, a skit involving he and his farmhands hoeing their rows while singing Row, Row, Row Your Boat, and then the telling of a tall tale involving a steer in which Earl, a wild and crazy guy, played the steer. Afterword, Earl and Dwain led tour of the farm, and Sam led another one showing the non-commercial produce growing on the Livengood's property, starting out with the paw paw trees in the front yard. Here's a photo of the hoeing entertainment: 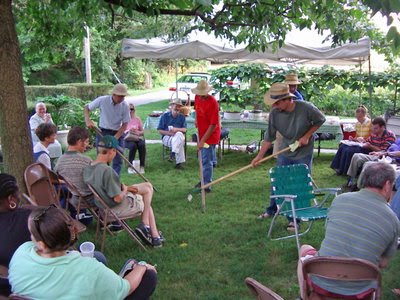 Soon after I arrived, Earl's friend and amateur farmer/forager Sam Consylman grabbed me and another guest, Alexandra Stafford (food editor of the Bulletin) to show off his garden, a few miles away. Here are photos of Sam amidst his onions (which will be appear in local farm markets this winter), holding one of his prize beets (a cylindrical variety, which I think are among the sweetest as well as perfectly shaped for roasting), and next to one of his peach trees. 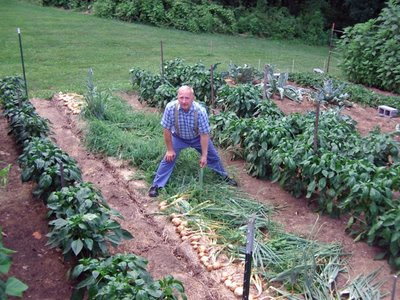 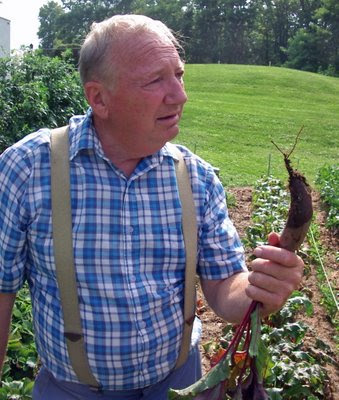 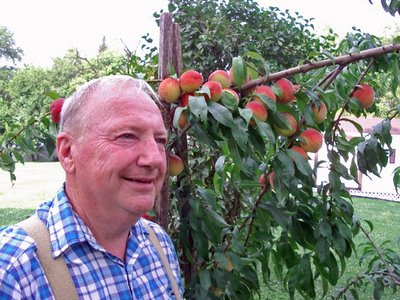 The peaches, btw, are delicious. Sam picked one up off the ground, brushed away the ants and the tiny spot they had just started working on and handed it to me. Incredibly juice, but with a subtle but absolutely peachy flavor. It was a modern white variety, Raritan Rose (obviously, by name, a product of Rutgers' Cook College of Agriculture), and well worth seeking out, so long as you get them as perfectly ripe as the one Sam handed to me, sans ants.
Posted by Bob Libkind at 4:03 PM