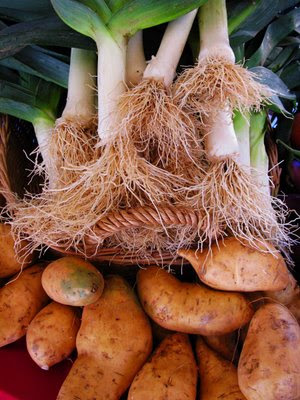 Tom Culton never fails to put together a photogenic display of his produce, like these leeks and white sweet potatoes at his Culton Organics stand at the Headhouse Farmers' Market Sunday. No less impressive are the varieties of colorful French carrots from Culton. 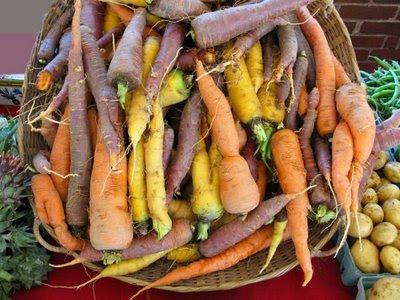 This was the weekend for me to pick up some Roma (plum) tomatoes. I purchased mine from Margerum's at Headhouse, but there were beautiful speciments from other vendors there, as well as at the Reading Terminal Market Saturday (Rineer's Family Farm, selling via Fair Food Farmstand, and at Benuel Kaufman's Lancaster County Produce). The price at most vendors hovered around $2/pound, though you could get a deal if you were planning to make a lot of sauce and could buy by the case. I skinned, cored and seeded the quart from Margerum's and made a sauce with onions, garlic (lots) and basil, which then went into some penne baked with parmesan, fresh mozzarella and ricotta. I topped it with some slices of sauteed mild Italian sausage from Martin's of the RTM.

Radishes seem to be back en force with the autumnal equinox. I purchased a bunch of French radishes, along with some Toscano kale. Among other fall vegetables, Culton, Earl Livengood and others are offering sweet, young knobs of celeriac; julienne and serve tossed with a remoulade sauce, or puree and mix with mashed potatoes.

White and red cranberries are in season at the Fair Food Farmstand. Lemons and limes were both eight for a buck at Iovine Brothers Produce Saturday, and rather ripe but eminently useable Hass avocados were a buck apiece. Iovine's local red bell peppers were selling for 99 cents, as were suntans; the orange and yellows (not local) were $1.99. Regular and Sicilian eggplants from South Jersey were two pounds for a dollar. Across the way at L. Halteman, quince was $1.99 and both butternut and acorn squashes 69-cents.

Andy of Hershel's East Side Deli said he's eliminated the middleman and is now buying his briskets (for corned beef and brisket) and navels (for pastrami) directly from one of the major Midwest suppliers. He's also brining his own corned beef and pastrami. Much to my surprise, Andy said he doesn't smoke his pastrami; it's all done through the magic of the cure and the seasonings. After some web research I learned, indeed, that pastrami does not necessarily have to be smoked to be authentic and tasty. Whodathunk?

Chocolate By Mueller at the RTM has long been a licorice-lover's delight. This week I discovered a favorite hard candy among them: Hopjes, a Dutch coffee-flavored confection. I was reacquainted with this treat earlier this year when a couple of pieces arrived with the check at the Belgium Cafe in Fairmount. 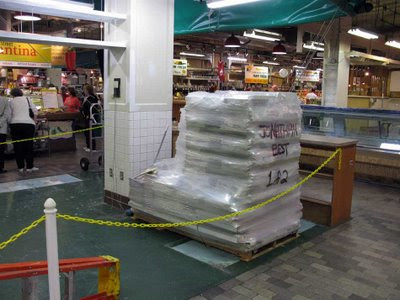 Work has started at Jonathan's Best, the grocery-soup-sandwich emporium which will occupy the former Natural Connection/Margerum's space. The new shop is looking for a late October opening.

Last week I complained about the condition of the stools at Fisher's. RTM GM Paul Steinke advises the vendor will be re-doing his stand, but not until after Christmas.

The RTM's annual Harvest Festival is scheduled for Saturday, Oct. 18. There will be hayrides around the block, stacks of hay along Harry Ochs Way (Filbert Street), a pumpkin patch, and special autumn treats from a number of vendors.

Mitch "Wild Thang" Williams was selling his salsa and signing autographs Saturday. A portion of the proceeds went to the Greater Philadelphia Chapter of the ALS Association.

The hurricane remants that but a damper on outdoor activities the Saturday before last caused the postponement of 10th anniversary festivities of the Clark Park Market operated by The Food Trust. Re-mark it on your calendar for Oct. 4. 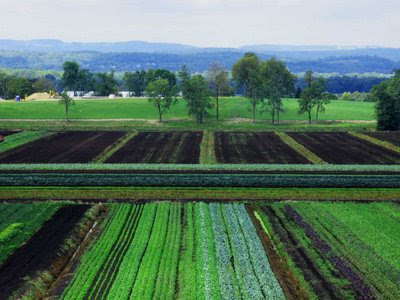 Last Thursday was a beautiful day for a field trip, so I visited some fields. In this case, they were in the Black Dirt belt of Pine Island, N.Y., just over the border from northewestern New Jersey, a three-hour ride from Philadelphia.

The ostensible purpose of the trip was not to view the Black Dirt farms (ideal for growing yellow onions, but also good for potatoes and all sorts of other veggies), but to collect my annual supply of Cox Orange Pippins, an apple variety that I am quick to tell all and anyone is one of the finest dessert (fresh-eating) apples in the world. They're hard to find, but Warwick Valley Winery & Distillery's pick-your-own operation has a row of them along with many other varities of apples. The winery is located just a half-mile down the road form the fields pictured here.

The Cox Orange Pippin is a finicky fruit; like many other "antique" apples, it's not a commercially appealing variety, since you only get a decent yield every other year. The variety dates back to the early 1800s and remains a much-loved apple in England, which is imported from South Africa in the off-season much as we do fruit from Chile. Today's Gala applie is a descendant of the Cox Orange Pippin.

Other than Warwick Valley Winery, the closest grower of this apple to Philadelphia of which I'm aware is Holy Root Farm in New Tripoli in Lehigh County. Farmer Rick Stuby advised me that his crop doesn't look so hot this year, hence, the trip to New York State. Warwick Valley Winery, btw, makes killer hard cider from apples and/or pears.

For those wishing to learn more about the Black Dirt Belt of Pine Island, there was an interesting article last year in The New York Times.

I concluded my jaunt with a visit to nearby Bobolink Dairy, Jonathan White's artisanal cheesery and bakery just over the border in New Jersey where I picked up his Drumm and Amtram varieties to accompany those lovely apples. Thence back home, via East Hanover, N.J., for a late lunch stop at Jimmy Buff's for that classic North Jersey treat, an Italian hot dog. It's an all-beef hot dog deep fried with onions, peppers and round-cut potatoes, served on a quarter wedge of round Italian bread. I prefer Tommy's version in my native Elizabeth, but Jimmy Buff's original in Newark is the acknowledged creator of this sandwich.
Posted by Bob Libkind at 10:56 AM