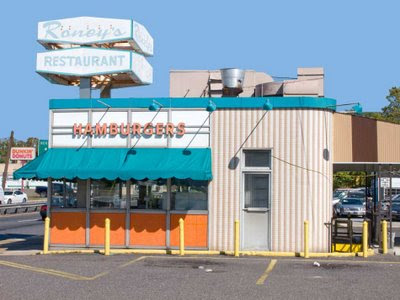 A diversion from my normal market report blogging . . .

At the intersection of Rt. 130 and Haddon Avenue in Collingswood, just across the line from Camden, Roney's 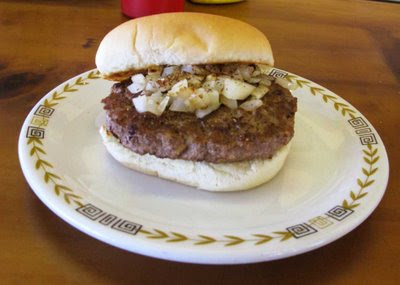 has been serving up breakfast fare, burgers and sandwiches since 1981, and before that as an outpost of the Midwestern-based White Tower chain, established as a White Castle immitator.

I first found Roney's about 10 years ago in search of authentic Jersey sliders akin to the White Diamond burgers I enjoyed in the 1960s and 70s. Alas, the small slider was taken off the menu a couple months ago, so now it's just a regular-sized burger 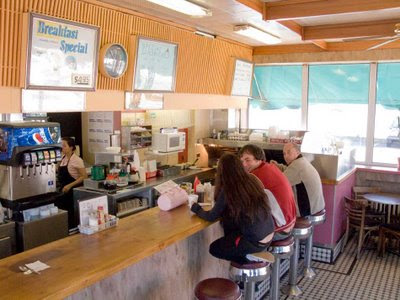 (my guess is it's five or six ounces). But it's a decent burger, even if it had been pre-shaped. The secret is that the shaping doesn't compact it to death, and the cook restrains herself from further compacting on the diner's small grill. Hence, it arrives reasonably juicy even when well done. Topped with sauteed onions (photo at right), the burger definitely satisfies. And at $2.80, fairly priced.

This is a joint that looks like it's a favored sobering-up spa after the bars close. Breakfast looks to be the main attraction, with pancakes, three-egg omelets, Jersey pork roll and similar goodies.

When I visited yesterday in the late morning, a man with a food truck (the type serving manufacturing plants at lunch and college dorms at night) was loading up on burgers, french fries, onion rings and a limited assortment of sandwiches.

For nostalgia sake alone, a visit to Roney's Restaurant would be rewarding. And the burgers beat out McDonald's and Burger King any time.