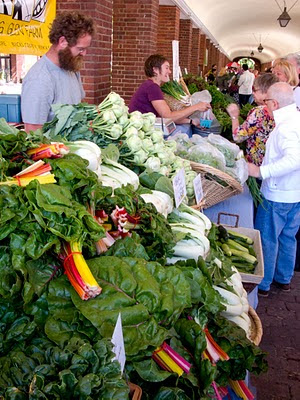 Chard (a beet variety grown for its leaves) added colors beyond green with its many-hued rib, as you can see from the photo. Blooming Glen always has one of the most overflowing stalls at Headhouse. Lack of early produce is why they usually skip the first few weeks of the season, instead waiting until they can begin to display a cornucopia of produce.

Blackbird Heritage Farm made its first-ever visit to  Headhouse. The Townsend, Delaware, farm grows produce and raises sheep, pigs and turkeys for meat sale. Since they're located a tidewater farm, it would be great if they could let their sheep feed on the salt marsh, which lends a distinct tang to the meat. As it is, their sheep are raised on ewe's milk and pasture and, according to the website, have a mild taste due to low levels of lanolin in the breed.

Tom Culton, after a week's absence, was back, this time with plenty of strawberries, including the $8/half-pint tiny French fraise de bois (forest or wild strawberries). His considerably larger and more conventional berries were priced at $7/quart, essentially the same as at Blooming Glen and Three Springs ($3.50/pint). The best berry bargain could be found at A.T. Buzby, whose IPM berries, large and sweet, were $5.50/quart (two for $10).
Posted by Bob Libkind at 12:15 PM