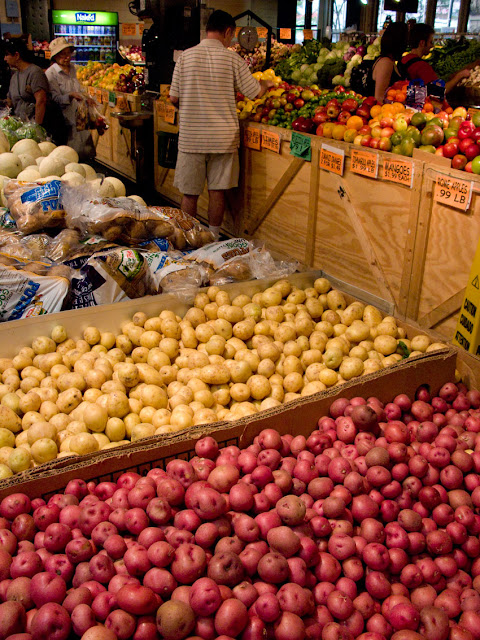 The Fair Food Farmstand at the Reading Terminal Market had plenty of fiddleheads $16/pound) and ramps ($4/bunch) this afternoon. They are considering adding a ramp supplier from a more northern area of the region, which means at least a few added weeks of availability. Both ramps and fiddleheads were quite fresh and in good shape. I'll be combining the ramps I bought today with mushrooms (both roasted) to accompany leftover flank steak.

Bunches of different greens were prominently displayed at Fair Food today, too, all supplied by Paradise Organics. In addition to a variety of tender greens for salad, you could obtain Lacinato and Curly kales, rainbow chard, collard greens and mustard greens.

A.T. Buzby's Jersey strawberries, available at $5.50/quart Sunday at Headhouse, could be had today at Fair Food, with a markup to $7.

Simply for comparison's sake, I picked up a pint of strawberries at Iovine Brothers' Produce, $2.49, from their contract Bucks County grower, Shadybrook Farm. These berries are smaller than Buzby's giants, but still nice sized. They get the taste test for dessert tonight.

Beyond berries, Iovine offered plenty of other local produce, especially various green things from Flaim Farm in South Jersey. Bunches of spinach were featured out front for 99-cents, but there was also green and red leaf, Boston and romaine lettuces, arugula, dandelion,  green chard, leeks, basil, cilantro, radishes and sweet potatoes from Flaim and other South Jersey growers.

They weren't local, but the 'C' sized red and yukon potatoes (photo above) sure looked tempting, especially at 99-cents/pound. Might be time for some potato salad.

Busman's holiday?  Tom Nicolosi, proprietor of Dinic's, can't get enough of the heat from his ovens. So he went out and bought himself one of the Green Egg outdoor ceramic barbecues. He started experimenting last weekend and loves it; he even is going to try to make red gravy (Italian tomato meat sauce) in it!

In my garden, the chives are starting to flower. They should be fully open tomorrow when I'll add the edible blooms to salad.
Posted by Bob Libkind at 5:11 PM