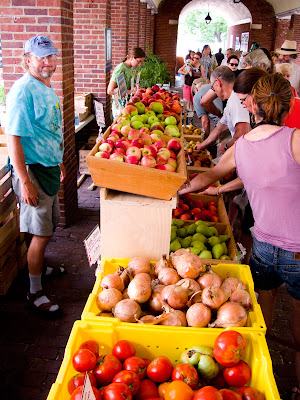 Virtually every stall space at the Headhouse Square Farmers' Market was occupied last Sunday, and willl be for the next two months at least. Back at the market last Sunday as North Star Orchards, showcasing its pears, peaches, nectarines, apples and tomatoes. A sign boasted they offered 17 varieties of tomatoes, most of them heirlooms, all priced at $2.50/ pound. North Star's Shinsui variety of Asian pears were also $2.50, but all other fruit was $2.

North Star is at a different location under the shambles this year, placed near the north end not far from the Pine Street entrance.

Blooming Glen offered plenty of tomatoes, too, with heirlooms at $3, field tomatos $2, and all colors of cherry tomatoes $2.50/pint. Over at Savoie Farms, heirlooms were $4/pound, cherry tomatos $4/pint.
Posted by Bob Libkind at 5:56 PM