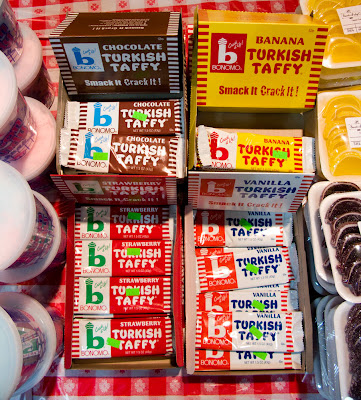 The annual Pennsylvania Dutch Festival is underway at the Reading Terminal Market, celebrating the foodways of the Amish and their Mennonite colleagues. Center court is filled with lots of goodies to eat, and on Saturday there will be a small petting zoo and the chance to take a ride around the block in a horse-drawn wagon.

One decidedly un-Amish treat I found at the festival today was Bonomo's Turkish Taffy. Perhaps this is unknown to Philadelphians, but Bonomo's was my must-have candy as a kid growing up in the New York-New Jersey metro area. Bonomo's allure derived from its physical properties. You'd smack a stick against a flat, hard surface and it would shatter into bite-sized pieces. It comes in four flavors: chocolate, vanilla, banana and strawberry. The latter, like almost any strawberry treat, tastes highly artificial; so does the banana, but that's my favorite.

(Technically it's not a taffy at all, but a "short" nougat.)

Bonomo's hasn't been made for at least 20 years and has been much sought after by those like me who remember it fondly. Its connection to the Pennsylvania Dutch Festival: it's made in Pennsylvania under contract by Classic Caramel in Camp Hill near Harrisburg for Bonomo's owner. Production and distribution started last month.