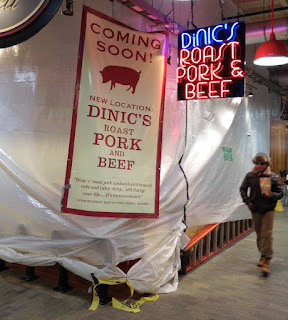 When Dinic's moves into its new stall at the Reading Terminal Market (perhaps as early as later this week, if the city's Health Department can schedule its inspection), it will be adorned with signs remembering the stall's predecessors in vending meats at this spot. Though Tom Nicolosi is a purveyor of cooked meats, he knows it all starts with the butcher.

Most folks know that Dinic's will occupy space vacated last year by Harry G. Ochs & Son Prime Butchers. But that's only half the story. Until the early 1970s, while one side of the stall was occupied by Ochs, the other was home to another market butcher, G.M. Yerger. When Yerger went out of business, Ochs expanded to span the entire space along Avenue B between the market's Fifth and Sixth Avenues (aisles) .

The signs, by the way, date back to the market's beginnings under the Reading Railroad's train shed. Wander and you'll see a number of them over what had originally been hooks to hang meat and other vittles. At Kaufman's Lancaster County Produce, for example, you'll see a sign for Eugene M. Moyers & Son, which left the market in the mid-1980s (but still makes killer ham under its Blooming Glen brand in the village of the same name between Doylestown and Quakertown).

Before yesterday, the soon-to-be-home of roast pork, beef, brisket, pulled pork and pork cutlet sandwiches was shrouded in plastic, looking as if the artist Christo had arisen from the dead and moved into the Reading Terminal Market.

With Dinic's move, Spataro's will begin work to move across the aisle. When that work is done, Flying Monkey will take over Spataro's space.

The musical chairs involving the sandwich makers and baker is just one aspect of the Avenue D Project, which will create additional leaseable space for more vendors and a multi-purpose room for meetings and other gatherings (as well as additional seating during lunch hour). The entire project was originally envisioned to be completed by late February, just in time for the Flower Show when hordes from across the Northeast and Mid Atlantic descend for an early fix of springtime.

Like most construction projects, however, this one fell of its initial schedule. Although the revamped rest rooms should be open by late February, the rest of the construction won't be completed until late April.