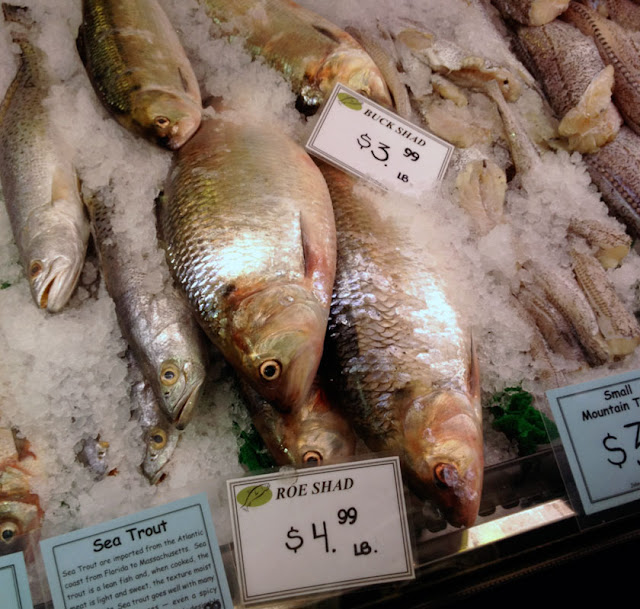 So what if it comes from way down south. The appearance of shad at the Reading Terminal Market is a surer sign that spring will eventually reach Philadelphia than any western Pennsylvania groundhog. The local spring run won't hit the Delaware (Lambertville is the center of local action, though Fishtown also holds a festival dedicated to the fish) in late April.

The first of the species could be found at John Yi's  "Eat Fish Live Longer" stall off center court. As always, the roe-laden females are a buck pricier than the bucks. I've got to admit I'm not a big fan of this herring-family variety due to its exceedingly complicated and fine bone structure; but when it comes to shad, it's all about the roe.

All three fishmongers at the market still have sardines in their display cases. Prices range from $1.99 to $5.99, with the cleaned fish commanding a higher price (though the whole fish really aren't that difficult to clean at home). Golden Fish Market (the one closest to Arch Street) also has some salt herring and mackerel available, the latter in filets. I've cooked the salt mackerels (after many changes of water to leach out the excess sodium) and enjoyed them immensely. They can be broiled, baked or pan-fried (sauté meunière).
Posted by Bob Libkind at 2:57 PM